If you ask Philadelphians what one person embodies the personality of their city, you might be surprised that the answer is a fictional character.

Rocky Balboa, Philadelphia’s boxing hero, mirrors the personality of the city: a blue-collar, lunch-pail, no-nonsense town where hard work will gain you the utmost respect.

Those same characteristics are the exactly qualities that will earn you respect in the world of boxing. In a lifestyle full of grueling training regiments, long hours in stuffy gyms, and repeatedly getting hit, the sport referred to as “the sweet science” is anything but.

It is no wonder that Philadelphia and boxing have been interwoven since the beginning of the 20th century. Whether it has been through the men who have risen to the top of the professional ranks and become champions, to the gyms and venues, which have hosted boxing matches for more than 70 years, Philadelphia’s boxing legacy goes well beyond the raised arms of Sylvester Stallone and 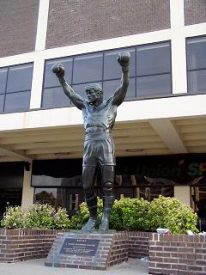 continues to grow into the 21st century.

While the big names of the boxing world are busy fighting their high-profile bouts in flashy venues like Atlantic City and Las Vegas, those looking to come up in the boxing world turn to what Ring calls “the No. 1 Boxing Venue in the World.”

The Blue Horizon, which was located in North Philadelphia at 1314 N. Broad St. until it closed recently, was home to boxing events since 1961.  Thirty boxers went on to win championships. Fights that took place in the 1,500-seat Carmichael Auditorium were broadcast on national television through USA and ESPN2. “The Blue,” as it was affectionately known in the city, was also home to the first African-American female boxing promoter in the country, Vernoca Michael.

Over the past century, Philadelphia has been tied to some of boxing’s greatest men. These pugilist specialists are at the forefront of who has made Philly the Mecca of American boxing.

While not born and raised in the city, Charles “Sonny” Liston called Philadelphia his hometown during the prime of his career. While in his youth, Liston had several run-ins with the law. However, Liston would go on to become heavyweight champion on the world from 1962 to 1964.

While Liston is known in boxing lore as being one of strongest heavyweights to ever step in the gym, his most famous moment came in a 1965 in a rematch against Cassius Clay (Muhammad Ali), where Liston was said to be hit by a “phantom punch” in the first round. It has been well-documented that Liston had ties to organized crime and was said to have thrown this contest. His death in 1970, while Liston was planning a comeback, has been shrouded in mystery to this day.

Around the time that Liston died, another Philadelphia heavyweight was making his mark in the boxing world. “Smokin’ Joe” Frazier is arguably the greatest boxer to ever come out of Philadelphia.

After winning a gold medal at the 1964 Olympic games in Tokyo, Frazier joined the professional boxing ranks and would not lose a bout until 1973.

Along the way, Frazier became heavyweight champion until he was defeated by George Foreman in the first-ever fight to be broadcast on HBO Boxing.

Frazier’s most legendary fights, however, came against Muhammad Ali. Frazier and Ali would fight three times over the course of four years, with Frazier winning only the initial bout. The third bout, fought in the Phillipines and dubbed “The Thrilla in Manilla” is considered to be the greatest boxing match ever fought. Although Ali won because of Frazier’s eye being swollen shut, Ali said the fight was “the closest thing to death” he had ever experienced.

The most recent well-known Philadelphia boxer has been widely declared as one of the greatest middleweight boxers of all time. Bernard “The Executioner” Hopkins was born and raised in North Philadelphia, and like Liston, had his problems with the law at an early age. Sentenced to 18 years in Graterford State Penitentiary for armed robbery, Hopkins converted to Islam and began to take up boxing while incarcerated. He would go on to become the national penitentiary middleweight champion three times during his stint in jail.

Once released on parole, he began to fight professionally, moving quickly up the middleweight ranks. In 1995, he defeated Segundo Mercado to become the IBF middleweight champion, a belt he would hold for a decade. Hopkins would go to win and defend his titles in 20 straight bout, becoming the undisputed middleweight champion in 2004 after defeating Oscar De La Hoya by technical knockout. Hopkins lost his belts to Jermain Taylor in 2005.

Heading into the 21st century, Philadelphia may be developing another heavyweight star. “Gentleman” Chazz Witherspoon, the cousin of former heavyweight champion, Tim Witherspoon, turned pro in December 2004. Dubbed “The Mensa with Muscle,” Chazz graduated from St. Joseph’s University with a degree in pharmaceutical marketing. While recruited to play basketball for the Hawks, Witherspoon decided he would rather follow in his cousin’s footsteps. Training in South Philadelphia at Joe Hand’s Boxing Gym, Chazz would go on to become the 2004 National Golden Gloves heavyweight champion, and represented the United States at the 2004 Olympic Games.

For more information on the history of Philadelphia boxing, visit PhillyBoxingHistory.com.