The city has a new vision of renovation that will try to improve challenged neighborhoods, boost tourism revenue and increase city growth in the next 25 years.

Alan Greenberger, the deputy mayor for economic development, said releasing these drafts was essential to the public so they can grasp the plans and give feedback on them.

“This is a prelude and not just for these districts,” Greenberger said, “but a prelude to the 18 districts that are part of the comprehensive plan.”

The plan, which is known as Philadelphia2035, is part of a wider initiative called the “Integrated Planning and Zoning Process.” 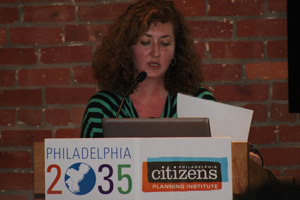 Jennifer Barr, a community planner with the planning commission and the project manager for the Lower South district, said she was happy about how the drafts were received at the meeting.

“A lot of applause and people smiling,” Barr said. “It was a very upbeat meeting.

“Our next steps for Lower South are really fulfilling the new zoning code,” Barr said. “Making sure the zoning is reflective of what is there now and towards the recommendations of the plan.”

Barr said she wants the new plans to help the residents in the neighborhood become more prosperous.

“The naval site we hope to see housing development there,” Barr said. “Also, seeing the sports complex transforming into less of a sea of parking and more of a destination.”

Meeka Outlaw, a resident of South Philadelphia, endorsed the plans.

“These drafts allowed us to get a glimpse of what the city is putting into these neighborhoods in the upcoming years,” Outlaw said. “The city does have a lot to offer. People just don’t take advantage of the things that are out there.”

Barr agreed. “We have been working really hard with the residents. Everyday, they face the challenges of being near the sports complex,” she said. “Whether it’s the traffic, the noise or bad behavior.”

Barr continued, reassuring that new development would not “perpetuate the cycle” of annoyance and nuisance, but “respect it.”

“The biggest problem is that people are not coming out,” Outlaw said. “So the city won’t know what the residents want.”

Mayor Michael A. Nutter made a short appearance at the meeting and thanked the Planning Commission and the residents.

“What I know about is great neighborhoods, great people, great zoning code and a development opportunity for the city of Philadelphia,” Mayor Nutter said. “And you are making that possible.”

https://vimeo.com/78315473] Plans are underway for the empty lot at the corner of 43rd Street and Baltimore Avenue. What began as a basic residential complex has expanded to 7,300 square feet of retail space, 108 residential units, [continue reading…]