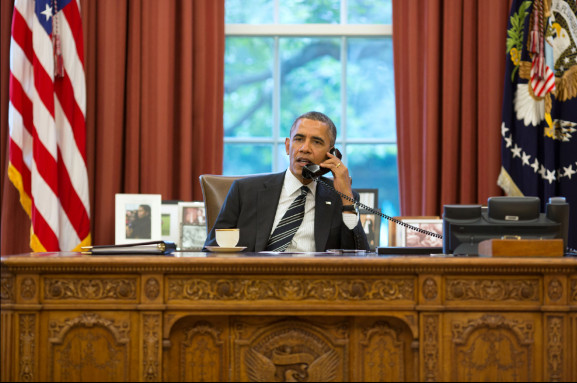 Mount Airy is known for having well-known politicians as residents, however, the area was quite stirred when the president of the United States came to their section of the city.

President Barrack Obama was in Mount Airy at the home of Comcast Vice President David L. Cohen on Thursday, Nov. 14, as a part of a fundraiser. They aimed to raise one million dollars for the Democratic Senatorial Campaign Committee.

Cohen’s home was highly protected and blocked off for about two blocks in each direction. State and city police were seen at almost every major intersection and traffic was at a standstill. Many residents were outside on the street corners watching the evening unfold.

One resident on the corner of McCallum Street said, “it’s just another day in Mount Airy!”

A little past six o’clock, the presidential motorcade made its way down McCallum Street. President Obama was believed to be in a black limo. Residents cheered the vehicles on as they headed to Cohen’s home through the tiny Mount Airy streets.

Although the streets were chaotic, it did not get in the way of all citizens.

“I knew he had been here a few years back,” said Meg Hagele, a Mount Airy resident and shop-owner. “I thought it was pretty cool but it didn’t affect me personally.”

Image by Pete Souza via the White House flickr stream.

In a cozy bistro on Germantown Avenue, food awareness is the idea behind every dish. The owners Mount Airy’s Wine Thief, Sophie and Chris Simpson, have embraced the idea of “you are what you eat.” [continue reading…]

Winter 2013 to 2014 was one of Philadelphia’s roughest. Record breaking snow was the cause of many natural disasters including potholes, home damage and fallen trees. The Wissahickon Valley Park was especially affected with over [continue reading…]