Weeds burst through cracked sidewalks and ivy sprawls up telephone poles. Rubble of what once held homes together – fiberboard, insulation and brick – forms small mountains at the streets’ edges. Strewn books, spilled spice jars, abandoned work boots and winter coats, broken toilets and rusted electronics collect mildew under fallen leaves. This is what a neighborhood abandoned for more than 25 years looks like. 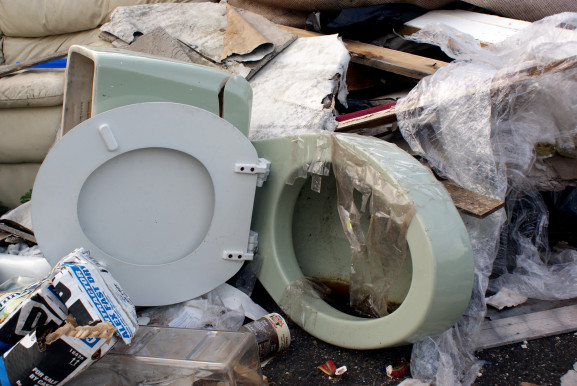 The city officially recognizes this vacant, 46-acre swath as the Logan Redevelopment Area, situated adjacent to the Roosevelt Boulevard with 11th Street to the east and Louden Street to the north. But Logan residents have dubbed this area the Logan Triangle, because like the Bermuda Triangle, mostly everything that once stood here has disappeared.

Since 1986, when the homes there started sinking into their foundations, the city has been demolishing the properties – but not seizing them. Because two houses remain inhabited, the city is prohibited from gaining full ownership of the area. That hasn’t stopped the Philadelphia Redevelopment Authority (PRA) from working with prospective developers and fielding their proposals but no plans have come to fruition. Not that they represented the needs of the community anyway; mixed-use development was hardly an acceptable option for residents who wanted green space. This, coupled with the massive dumping ground left in the wake of demolition, continues to spur residents’ anger.

In a renewed effort to redevelop the area, the PRA is working to bridge the gap between developers and neighbors and meet the needs of both.

“The PRA has maintained that in the final [Request for Proposal] there will be a requirement of a minimum of a 1-acre continuous green space for public recreational use as a community benefit to be included in the final development,” according to the Logan Community Development Corporation.

On Sept. 28 of this year, the nonprofit CDC hosted the Logan Triangle Charrette workshop, inviting area residents to work alongside KSK Architects Planners Historians to re-imagine uses for that 1-acre plot. They imagined performance spaces, picnic tables to drink coffee with their neighbors, greenery, gardens and playgrounds and safe walking paths for the kids. 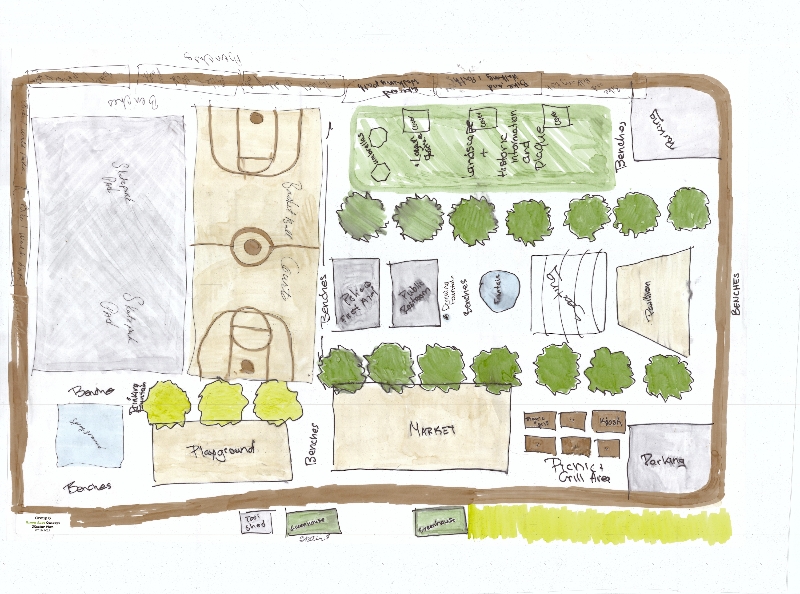 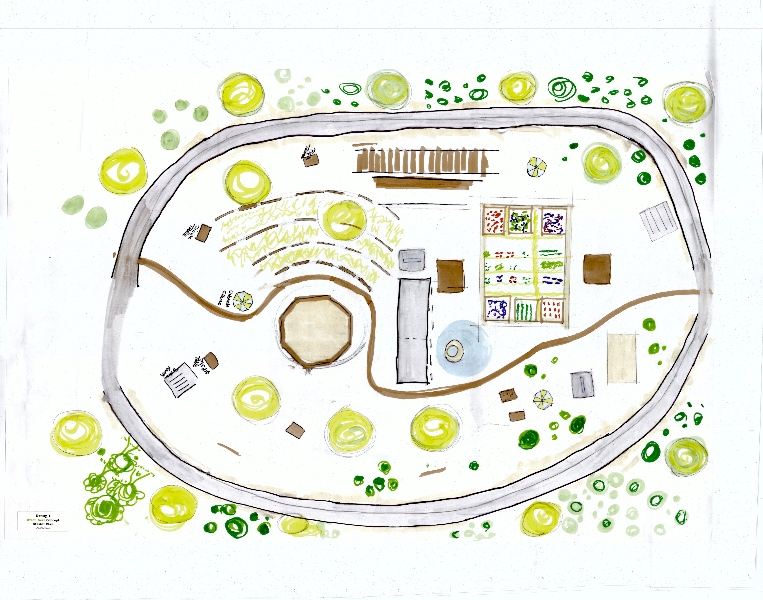 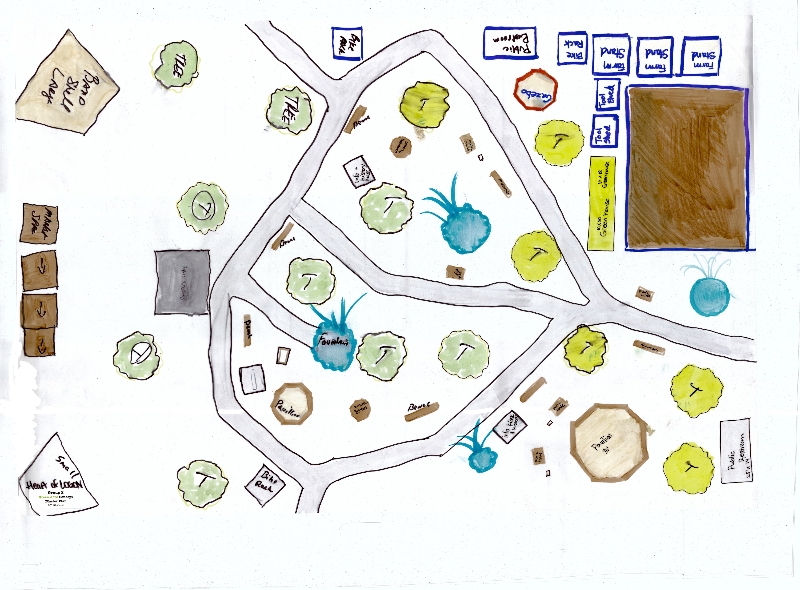 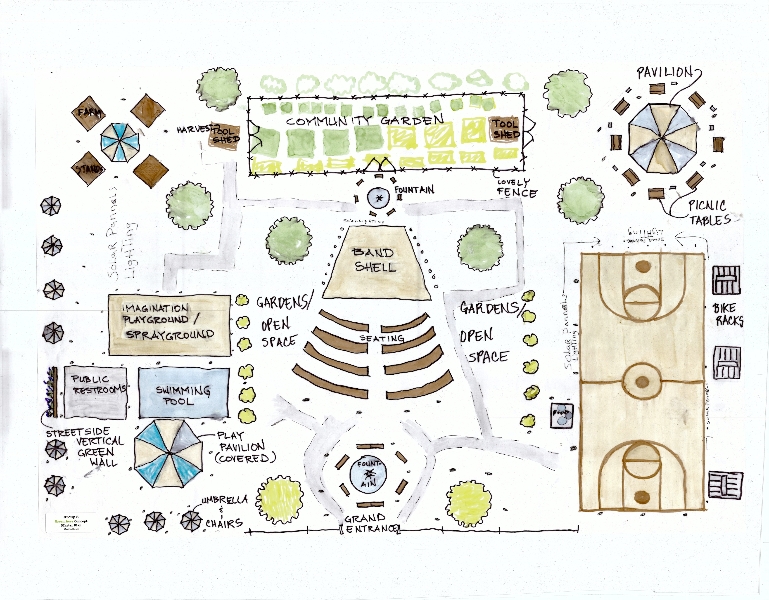 Tony Eden, a Logan resident since 1970, said he heard rumors of a mall but he doesn’t think his neighbors are interested in having new businesses.

“Make it a park,” he said. “On the other side of the [Roosevelt] Boulevard is Hunting Park.”

Some developers claim there isn’t a need for another park with Hunting Park in such close proximity. But residents have expressed that they don’t want their children running across the busy Boulevard.

However Logan Triangle is restored, though, it’s an area key to the neighborhood’s vitality. The Office of Housing and Community Development said it plans to use taxes from the Triangle’s development to fund beautification efforts throughout the neighborhood.

Urban blight plagues Logan, but its effects are most prevalent in the Triangle.

A 2009 Urban Land Institute report acknowledged the effect blight has on residents: nobody wants to move in, houses depreciate in value, current homeowners grow frustrated with the city’s inaction but won’t leave their mortgages. The vicious cycle lurches on.

The Triangle is also popular dumping site these days. ULI’s report recommended regular maintenance of the Triangle, including trash removal and landscaping to be handled by the PRA. There hasn’t been any initiative since that 2009 recommendation. 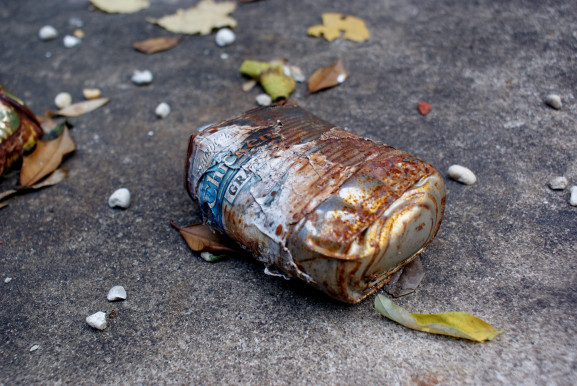 But Logan’s problems began so much earlier than now: the 1870s.

The Wingohocking Creek cuts a jagged line from the Delaware River, through Logan and up to Mount Airy. A project to encapsulate the stream and its tributaries in sewers was underway by the late 19th century, though it wouldn’t be finished for another 50 years.

The southeastern edge of the Triangle lay lower than most other areas and the Wingohocking sewer couldn’t drain water fast enough to prevent flooding. A relief sewer under Wingohocking street was planned in 1930, but wasn’t built until the ’50s.

In that time, growing demands for housing prompted hasty, haphazard construction methods, and most of the neighborhood was built upon unstable fill – up to 45 feet of coal ash and silt.

Throughout the mid-century, rowhouses sprung up in this North Philly neighborhood. The area was a bustling economic hub, a predominantly Jewish neighborhood and a somewhat suburban retreat far from the Center City buzz. At least until the early 80s, when the stream overtook the ash. Foundations sunk, trees fell, homes fell apart.

After a gas explosion in February 1986 that damaged four homes and destroyed two,  the city began acquiring land and demolishing the 957 homes of the Triangle’s 5,000 residents. By April, the Department of Licenses and Inspections found several homes “imminently dangerous” or “structurally dangerous,” Philly.com reported.

A mission to demolish the homes, compensate residents and help relocate them was supposed to last only three years. It took 20.

Logan CDC, then known as Logan Assistance Corporation, was borne from the crisis to help relocate displaced residents. Now, the group actively works with those living adjacent to the Triangle, fielding their complaints and organizing community meetings.

When former Mayor John F. Street took office in 2000, hopes were high that he would breathe new life into Logan with his talks of community development. Whereas former Mayor Edward G. Rendell paid mind and money to the glittering Center City revitalization, Street promised initiative and $37 million – double what had already been spent on the area by former Mayor W. Wilson Goode, who held office during the ’86 explosion.

By 2006, OHCD spent a reported $38 million, most of it federal money, helping Logan property owners relocate and another $12 million demolishing the 17 blocks of homes.

“A lot of people was homeless because the state didn’t want to give them no money to find them new housing and they were stuck,” he stated.

In 2007, the city’s request for mixed-use commercial proposals attracted two developers, one of whom was Bart Blatstein, developer of the Piazza at Schmidt’s. Both plans were dropped shortly thereafter.

“I don’t know what happened – the whole thing just got pulled,” Blatstein told the Inquirer in 2010. His proposal included a supermarket, an elderly care center and a banquet hall, which he said could “be an economic generator for the area, bringing in much-needed infrastructure.”

According to Winn, the city didn’t own the land by this point.

“Releasing an RFP when you don’t own the land,'” Winn said, “is essentially like me coming in and saying, ‘Oh, that piece of land over there, I’m going to go hire somebody to develop it, but I don’t even have the right to sell it to them.'”

Officials say the city owns most of the land but it blames the cost of land remediation and the continued economic downturn for inaction. Hopes for a green zone persist, but miscommunication between various agencies and residents hinders any potential progress.

“One lady told me no one’s ever asked us what we wanted, they’ve only told us what they’re bringing,” Winn recalled. 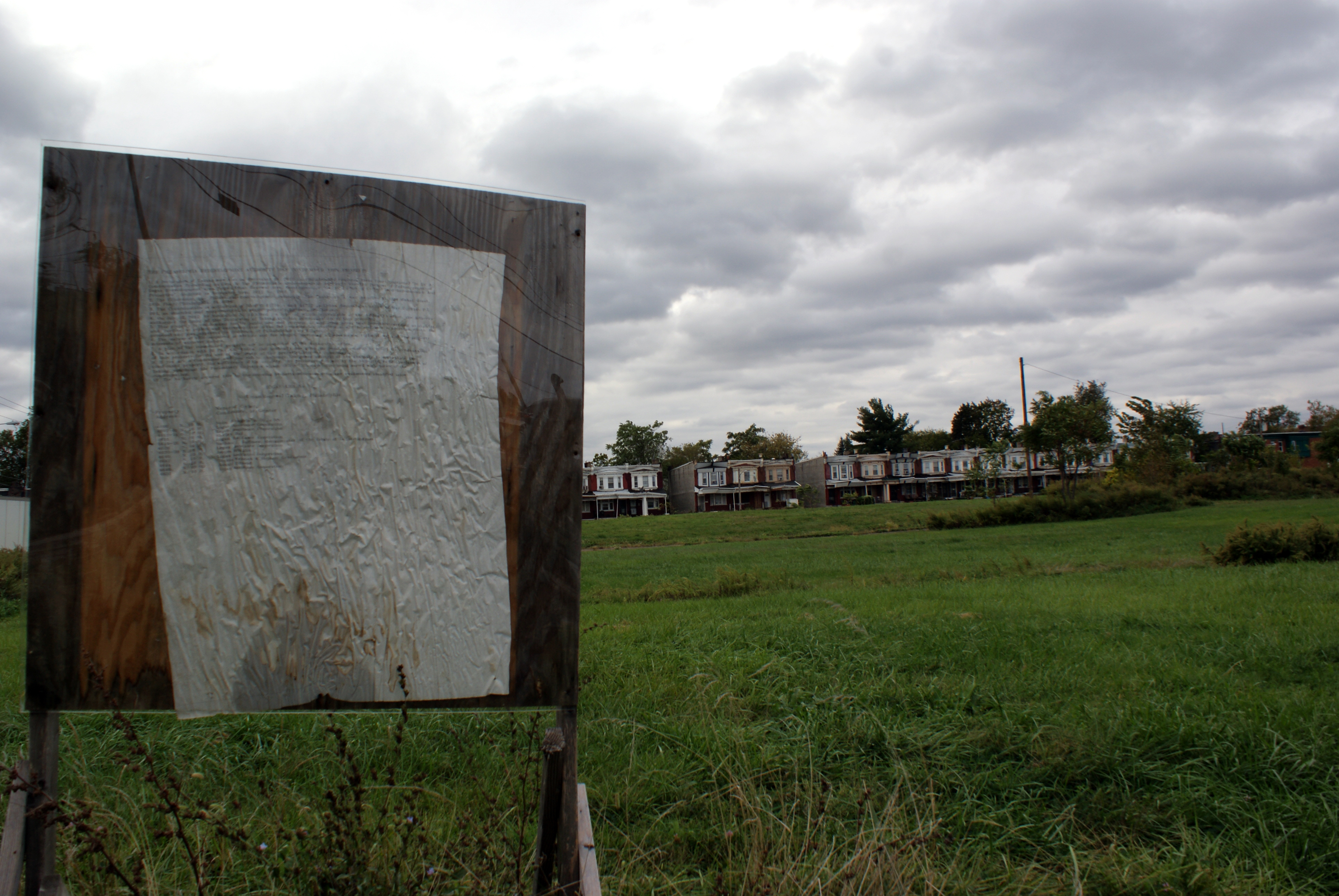 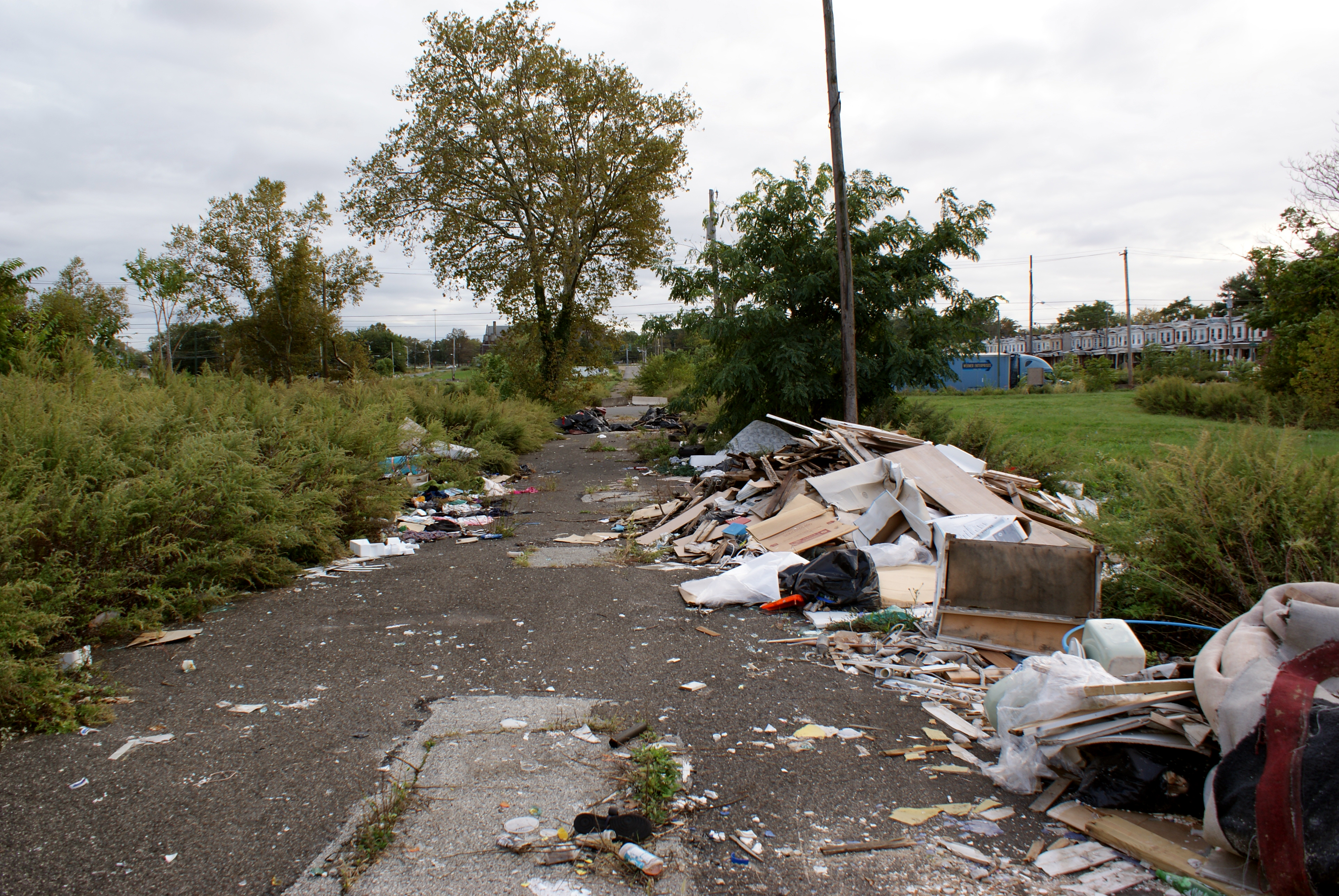 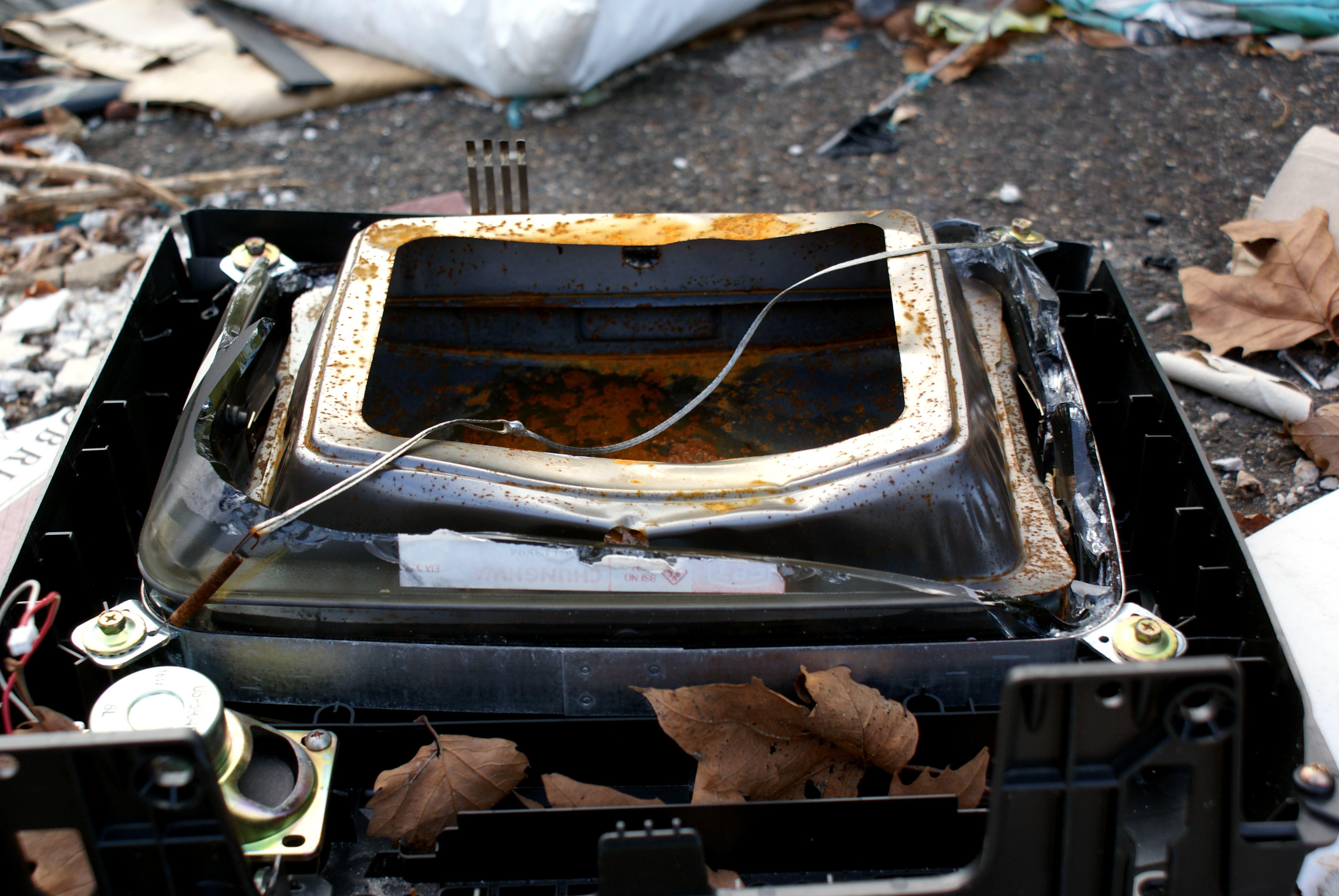 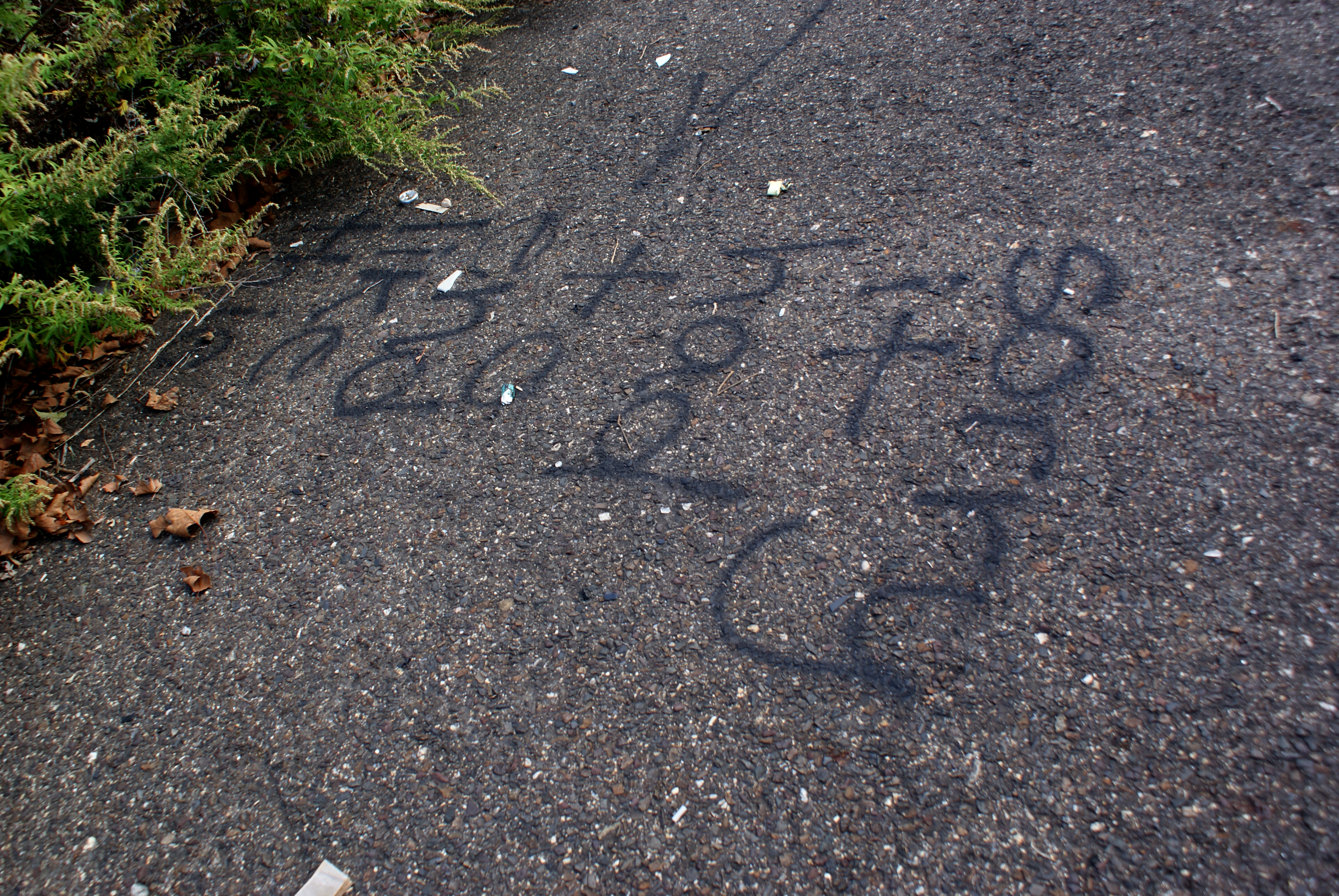 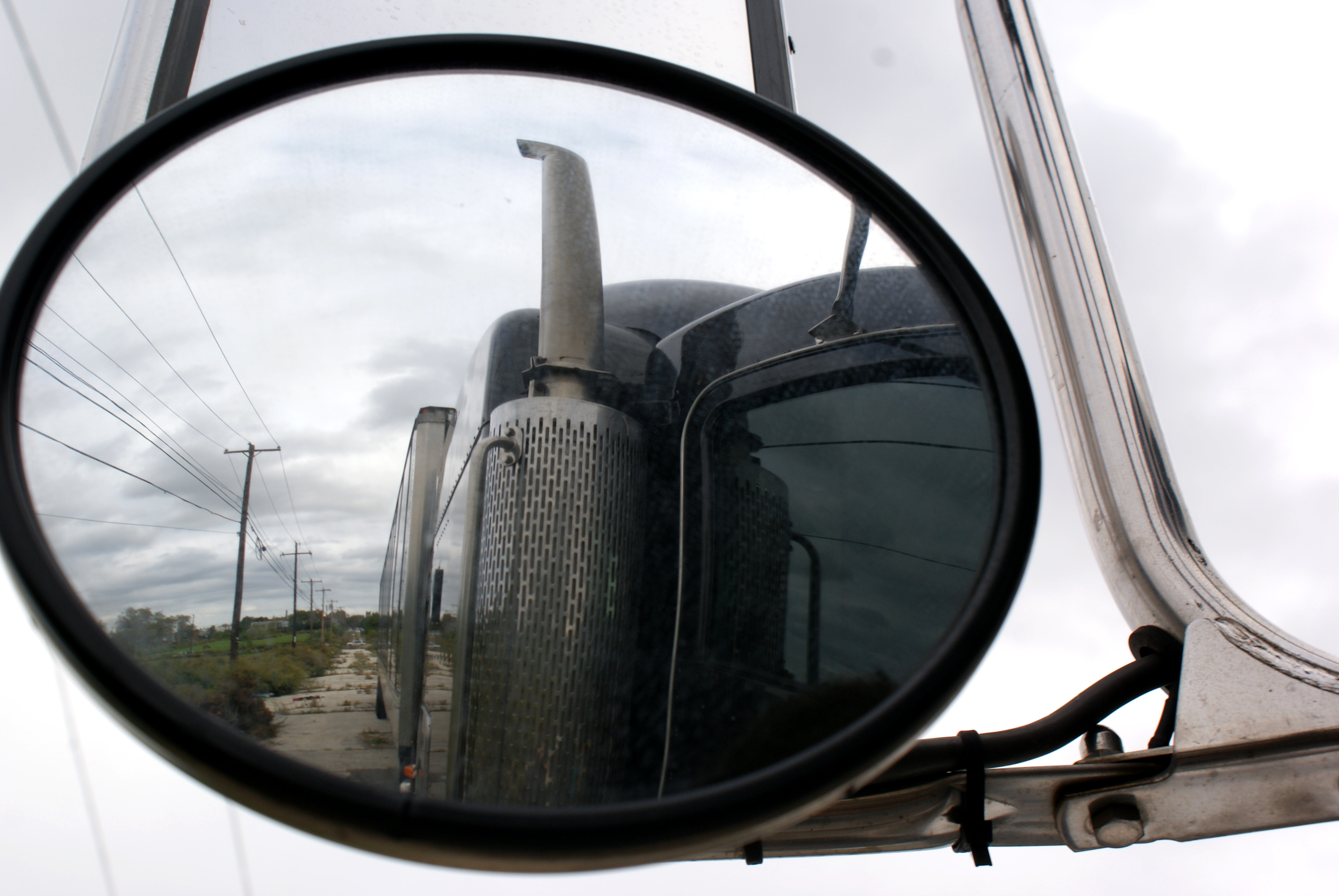 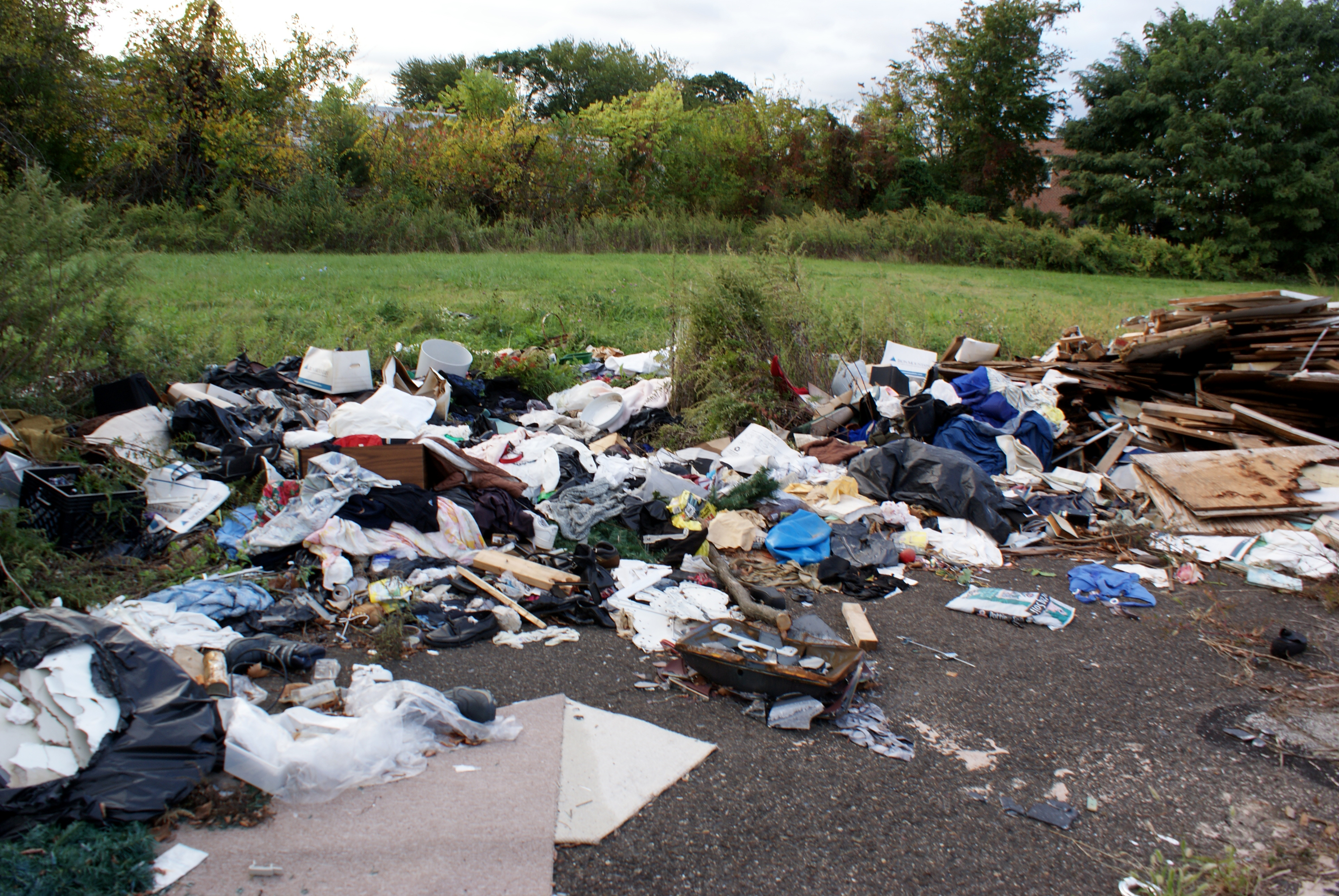 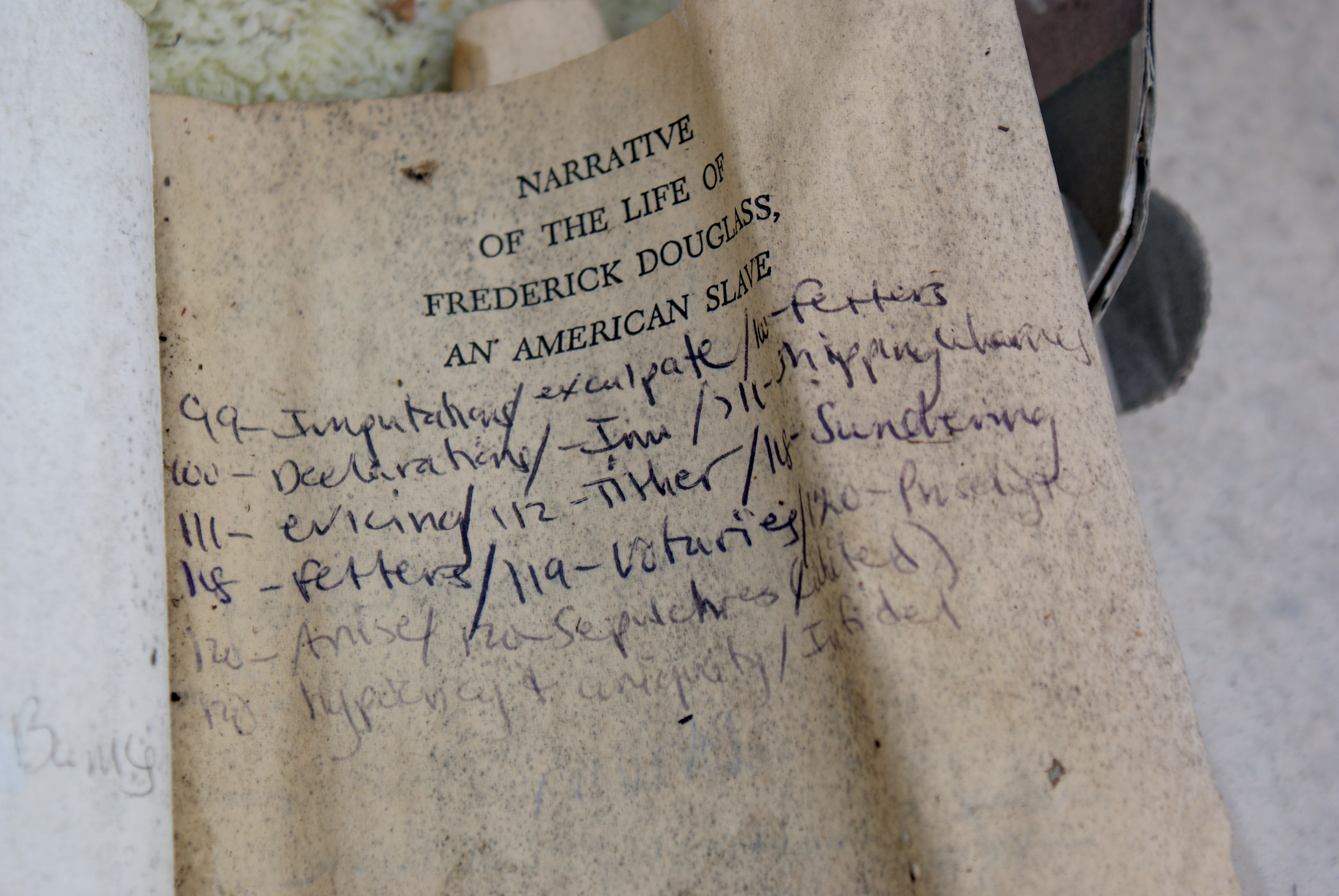 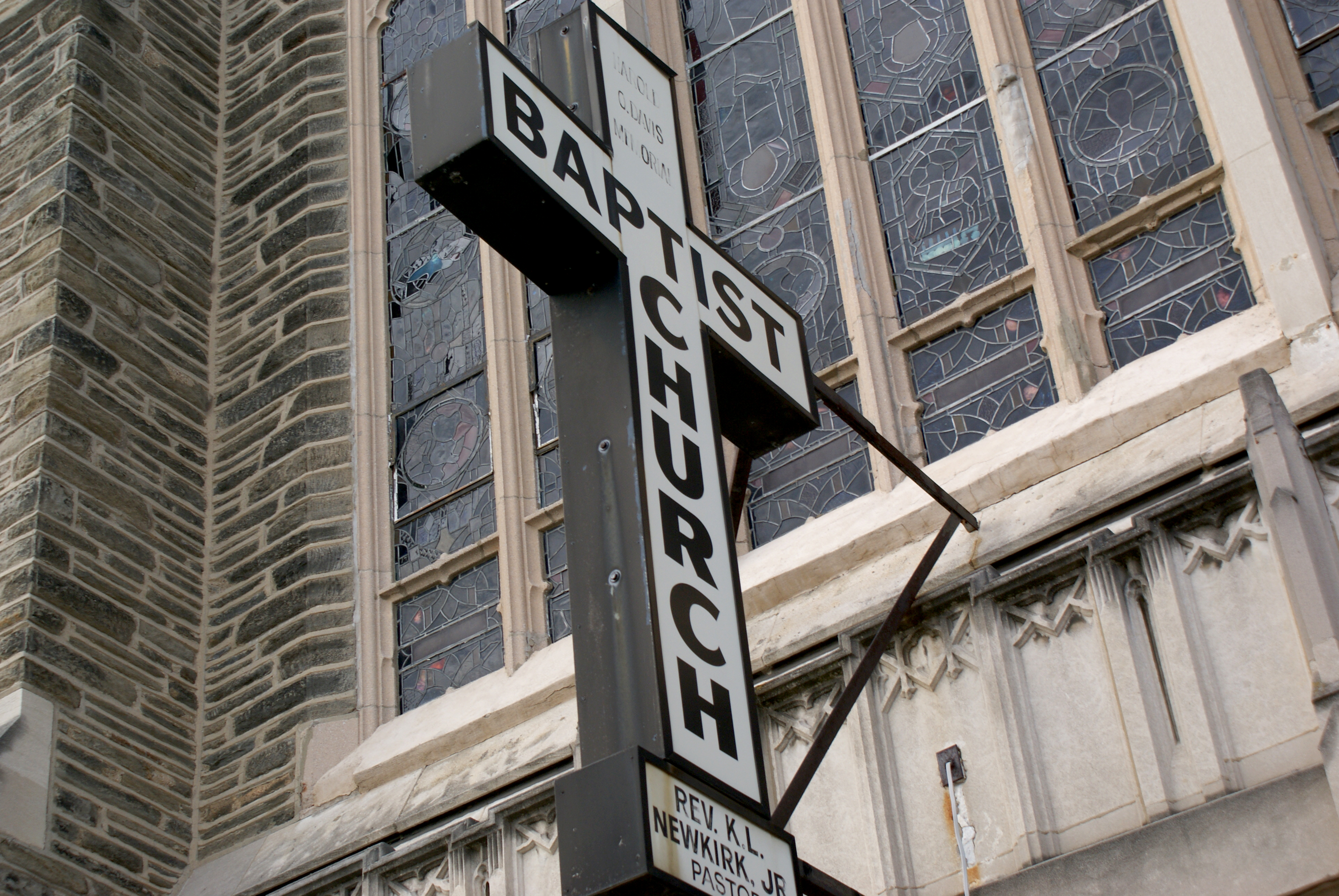 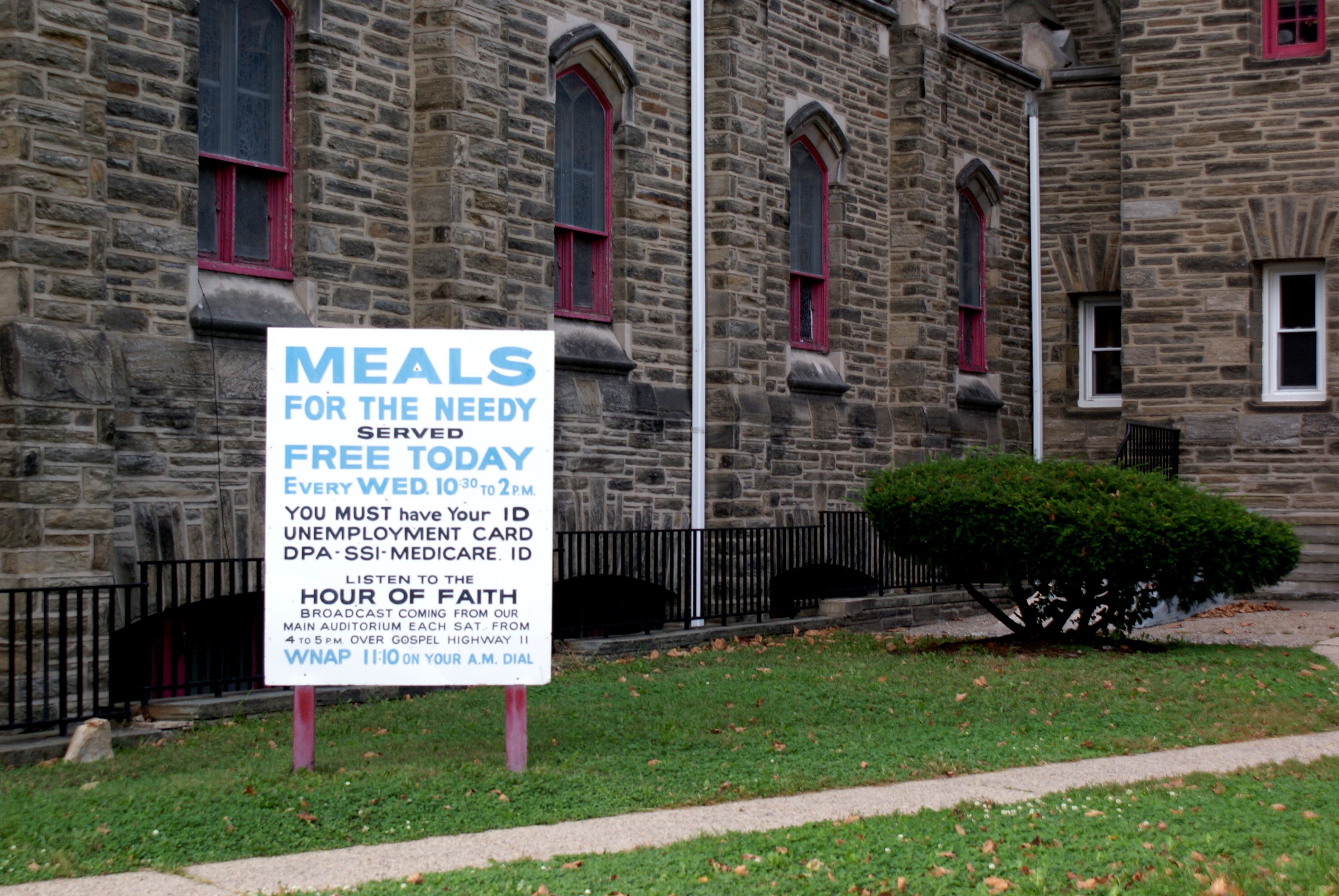 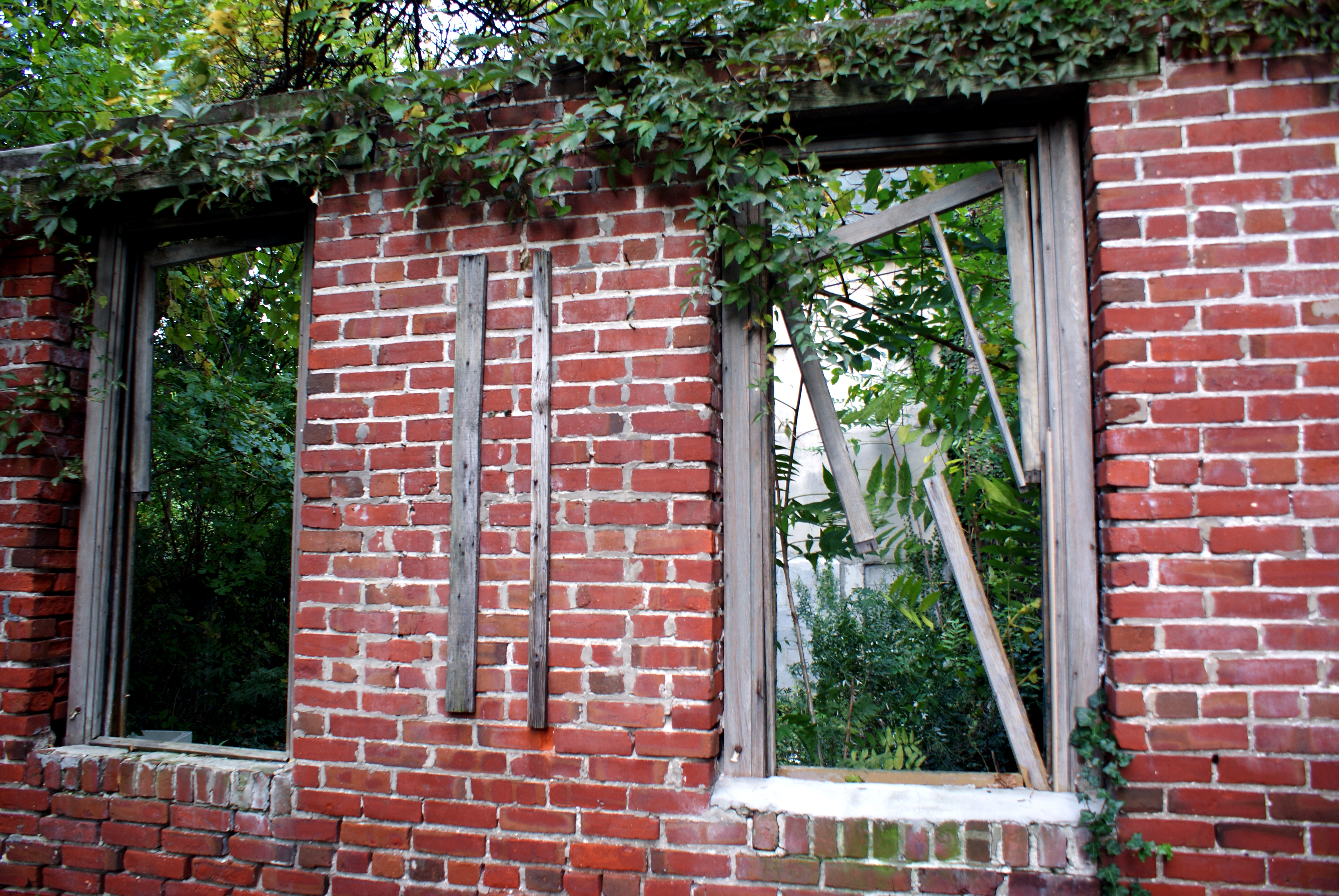 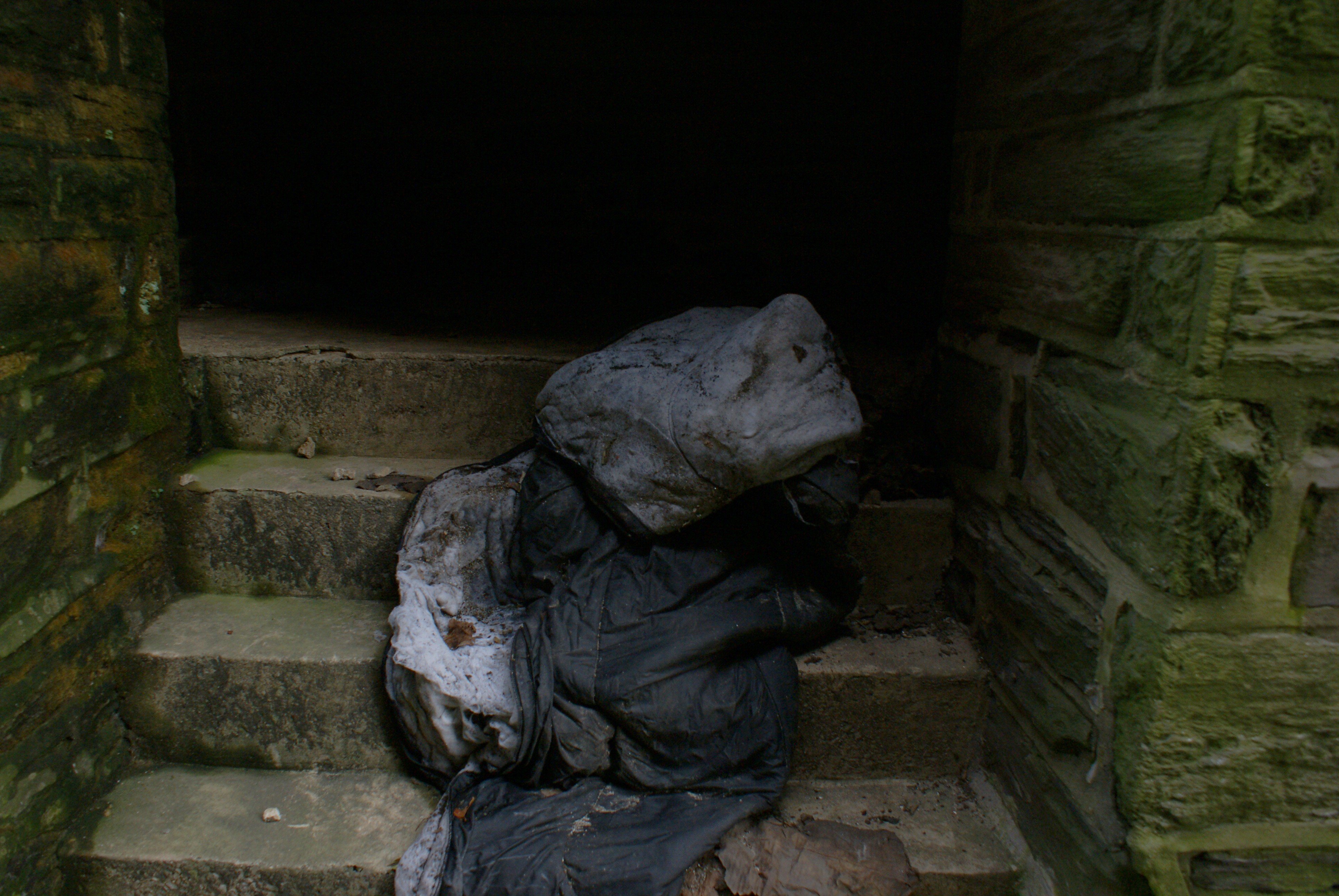 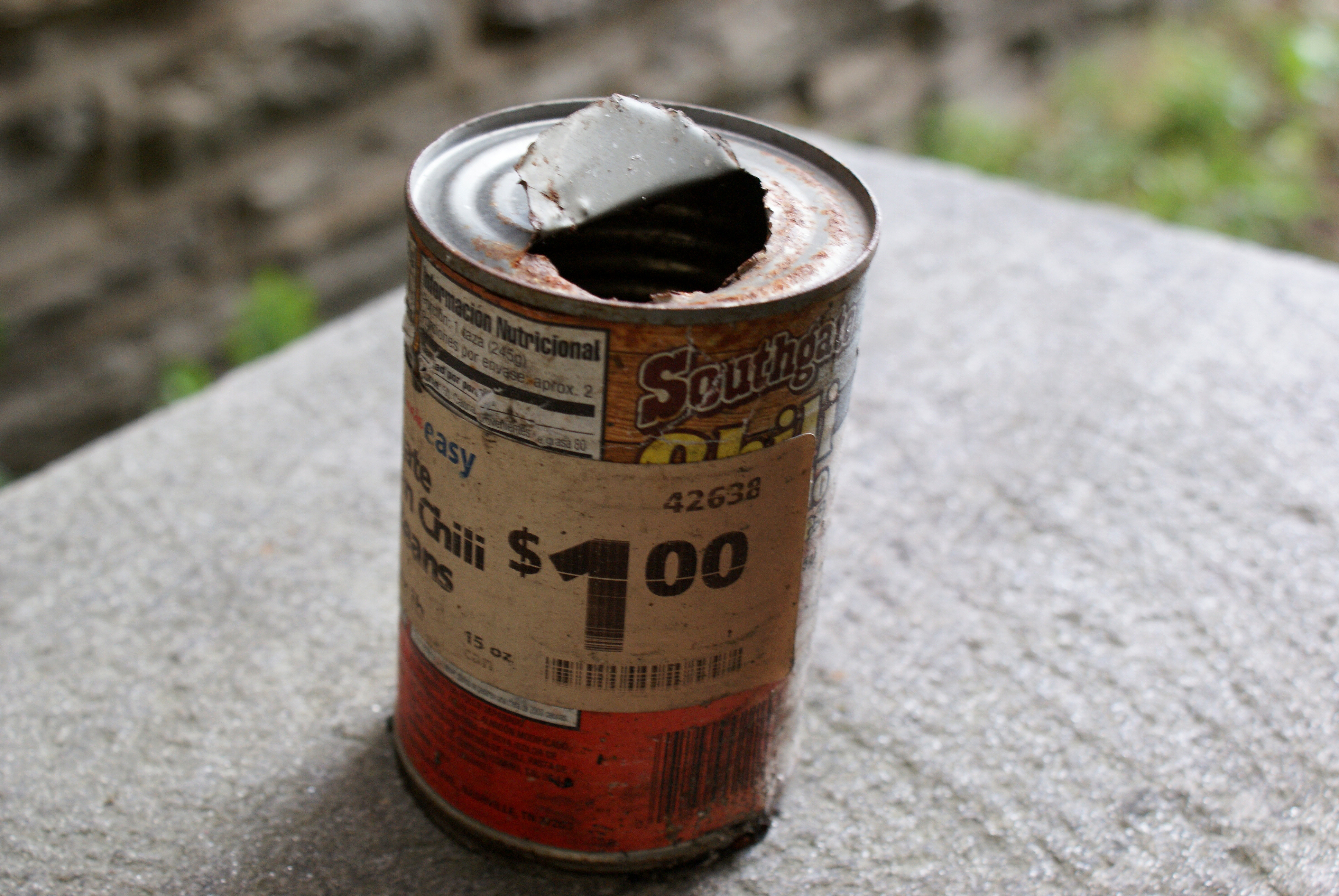 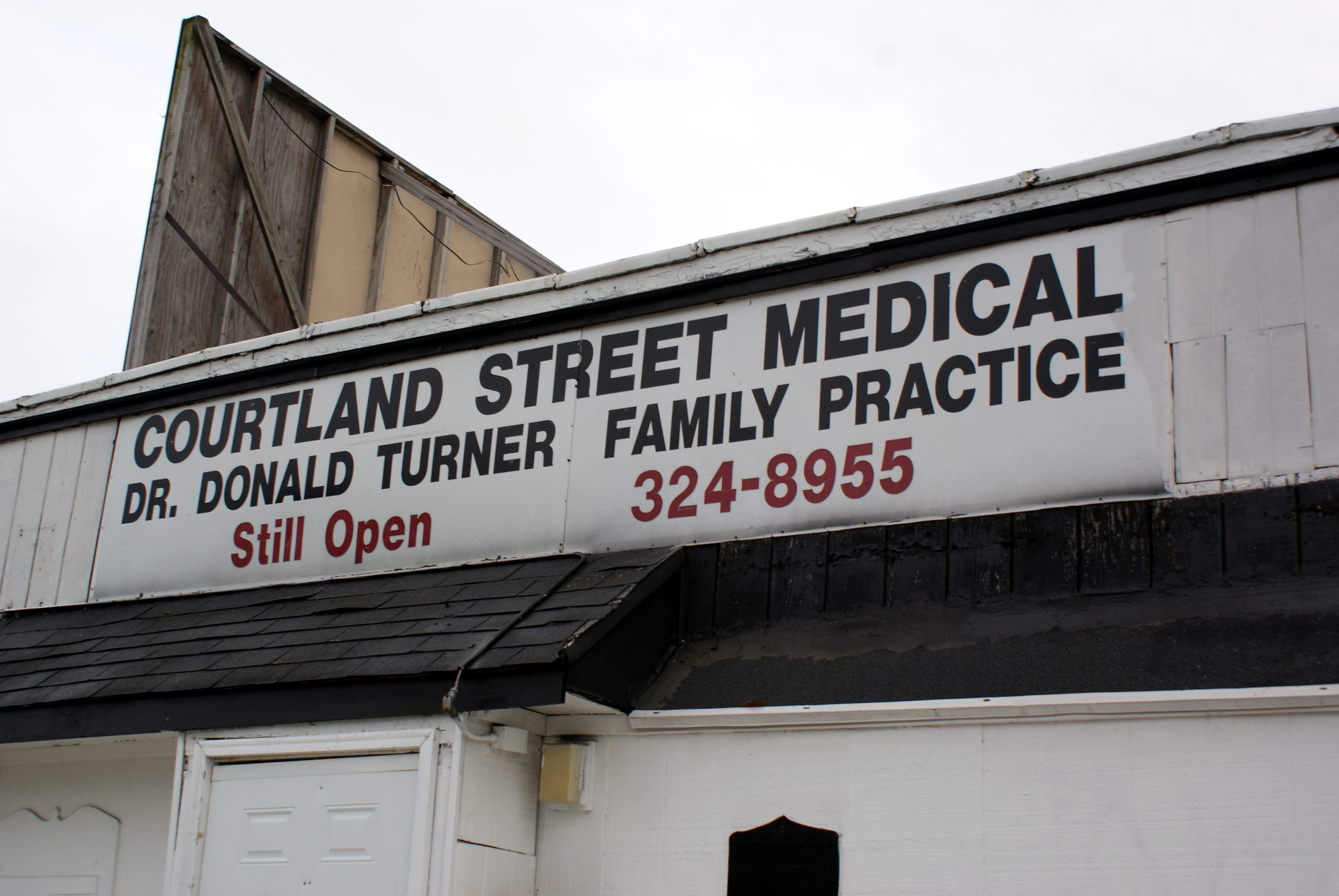 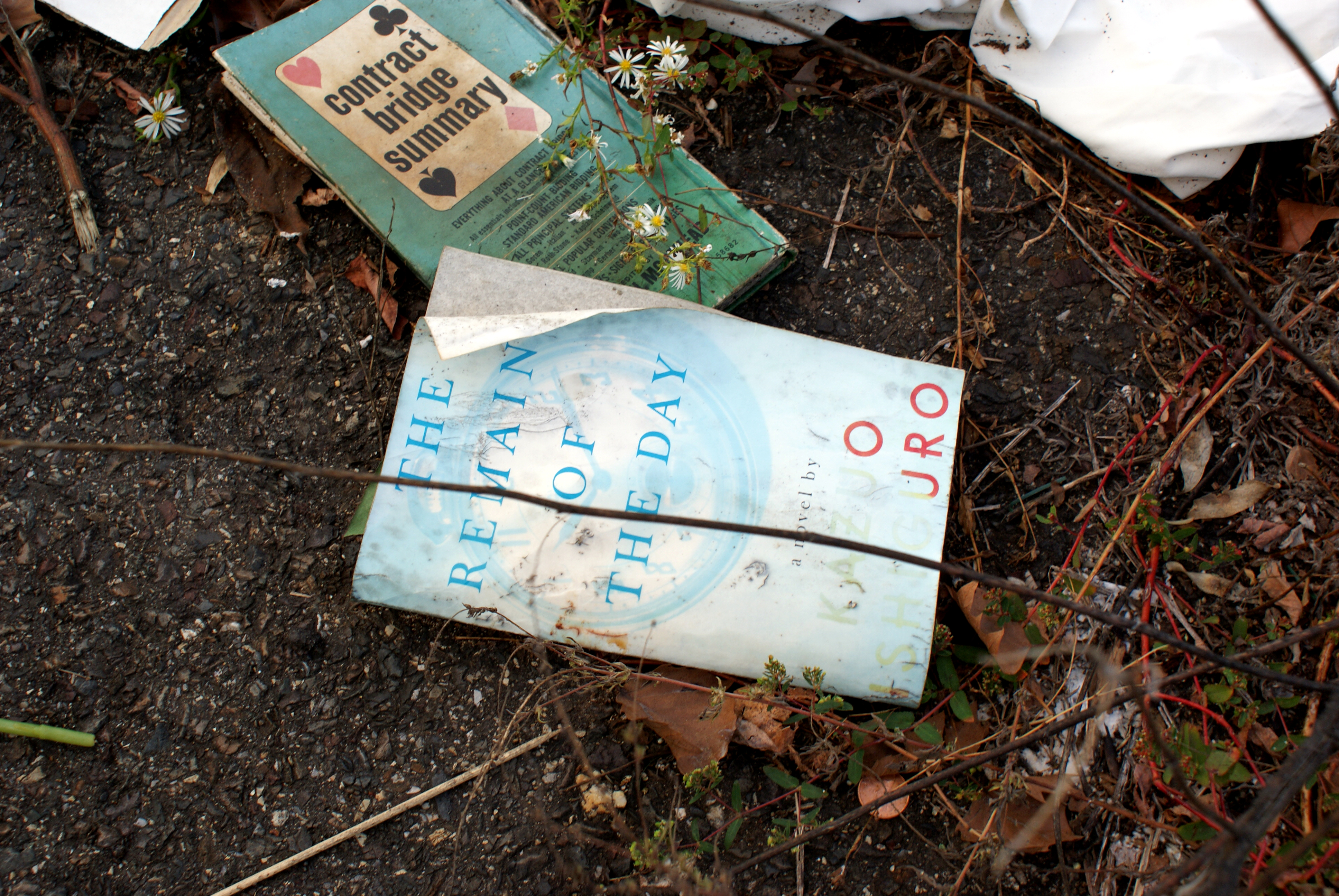 <
►
>
A weather-worn condemnation notice informs visitors of the Triangle's blight.

The Friday evening kickboxing class at Joe Hand Gym does more than get young girls exercising. It builds them up from the inside out. Last summer, Erin Fennell and Brittani Warner started a kickboxing and [Read More]

Poems about New York and chapters from a romance novel echoed through the Kingsessing Library’s sunlit basement. On Sept. 28, the library hosted an open mic poetry night for older adults— the first of many, [Read More]