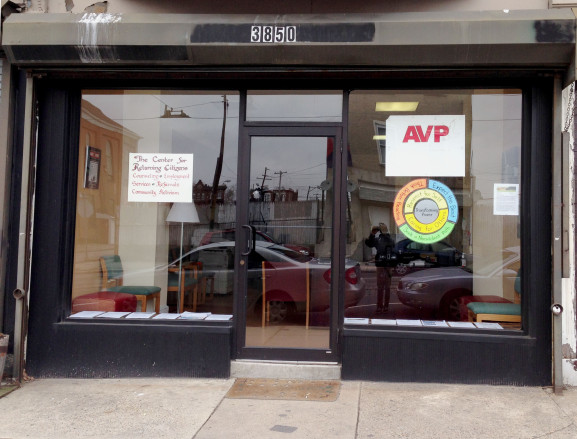 A little more than a decade ago, Anthony Dickerson found himself in a Pennsylvania state prison serving a ten year sentence for racketeering and narcotics distribution. He described prison as place full of cliques. Like a scene out of a high school, you fell in where you fit in. Dickerson was different, he didn’t want to fit in. He’d rather stay in his own “lane,” preparing for life back in what he had known as society.

Fast forward 11 years and you’ll find Dickerson out of jail and out of sight of any illegal activity. He’s now made it his business to help ex-offenders, like himself, lead productive lives in society. Dickerson, program director at The Center for Returning Citizens’ Germantown location, works daily trying to find access to necessary services, affordable housing and options to get around obstacles ex-offenders are bound to face.

“We try to create a foundation for people when they first get out. They come here and they can get an accurate description of the tone of the city,” Dickerson said.

The main draw to TCRC’s Germantown location is simple. The need for employment. Ex-offenders visit the office daily looking for any assistance they can get in their efforts to obtain a job.

“You can’t move forward without income,” Dickerson said passionately. “If a person doesn’t have income they’re more prone to relapse and do something that’ll get them locked up.”

Dickerson recalled one client who had recently been released from prison. The man had walked from his halfway house at Kensington and Allegheny to TCRC’s office on Germantown Avenue because he didn’t have any car fare. He had come to the office in the first place because he was in dire need of a shirt and a tie, having been turned away from a job interview because he didn’t have the proper attire.

“He was heartbroken,” Dickerson explained.

State Parole Agent Cedric Smith said there are a wealth of resources to help keep ex-offenders on the right track.

“There are plenty of resources available in the Philadelphia region opposed to other areas across the state, but not as many as it used to be due to funding for a lot of places,” Smith said.

A new report may point to a big problem within Pennsylvania’s corrections system. Halfway houses, which have long been used as transitional programs for ex-offenders making their entry back into society, may not be as effective as they’re thought to be. Pennsylvania’s 2013 Recidivism Report show ex-offenders paroled to halfway houses, in large, have about the same chance of being sent back to jail as those who are paroled to the street. In 2010-11, 40.5 percent of ex-offenders who were released from prison and paroled to a halfway house found themselves back in jail within a year. The same can be said for 37.5 percent of ex-offenders who were paroled to the street that same year.

TCRC believes readily available jobs for the population they serve could be the fix. The non-profit, which employs an all-volunteer staff, hope to one day provide transitional employment.

“If a person come out of jail, we want people to have goals,” Dickerson said. “This job will provide you a foundation, but at the same time we want you to be pursuing other things.”

Programs like the one TCRC is proposing may be needed, especially when you consider recent statistics show Philadelphia boasts the state’s highest re-arrest rate at 60.1 percent. The city of Brotherly Love also took the title for the state’s second highest recidivism rate with nearly 66 percent of ex-offenders released from prison being sent back, according to statistics from the Pennsylvania Department of Corrections.

For those at TCRC, it’s a matter of sticking together socially, politically and economically to build a voice.

Germantown: New Directions Offers a Way Out for Troubled Women

https://vimeo.com/22319683] Nicole Mattis murdered her abusive boyfriend. Cindy Livingston, 46, has been a PCP user since the age of 13. Together they are starting over at New Directions for Women Inc., an alternative to […]

Northern Liberties: The Next Gold Standard for Environmental Stewardship?

Lara Kelly, the quality of life coordinator for the Northern Liberties Neighbors Association, promotes healthy living and environment for the community. She has been an active member in the neighborhood for 19 years. What do you bring to […]