The converted firehouse at the corner of 50th Street and Baltimore Avenue housed Engine Company 60 and Ladder Company 13 before 1984, when the Fire Department moved just west to a nearby location.

The building is now home to Dock Street Brewing Co., its most visible tenant, as well as several other businesses, including Firehouse Bicycles. But nothing captures the fresh bohemian spirit of Cedar Park like the Satellite Café, a punk-y, funky bungalow located in a first floor annex to the old firehouse.

Gritty but clean, murky yet inviting, the café offers a wide array of vegan wraps, bagels, muffins and smoothies, all at a cheap price. Locals, many from the newly gentrified neighborhood to its east, come frequently to the quaint and artsy café to socialize and relax over tea or coffee.

The small business first opened its doors in 2004 and has been a neighborhood hotspot ever since. All their coffee is organic, fair trade—unlike a place most chains, like Starbucks—and comes from Fonseca, a local roaster. The Metropolitan Tea Company and Mountain Rose Herbs provide them tea, while other ingredients hail from nearby Mariposa Food Co-Op and Milk Creek Farm. 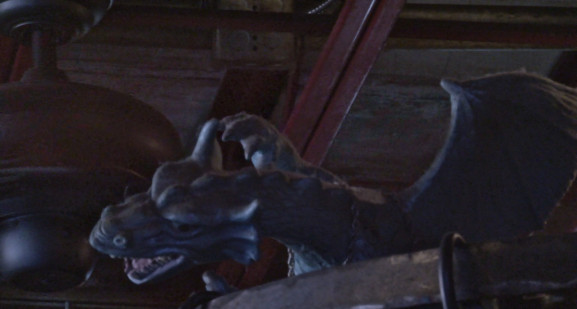 Inside, the café looks like something from a Harry Potter movie. A dingy, medieval-looking mug holder of dragons (above) hangs ominously above a row of syrups used for mixing smoothies. A blue painting of an anguished man’s face hangs in the dim light. A bizarre Virgin Mary peers into the darkness with empty, neon yellow eyes. Yet the café’s atmosphere is one of warm tranquility. There’s a strong sense of community is this small shack just below Firehouse Bicycles.

“We have a lot of regulars,” says longtime manager Wilder Scott-Straight. “The neighborhood has changed in the last ten years. It’s a lot of people who live in the neighborhood for quite a long time who come here and then a lot of new people. [But] it’s mostly regulars.”

To John Dukes, who’s lived in West Philadelphia for ten years, the Satellite has become something of a second home.

“One thing I like about this place is that there’s a lot of folks I know who come here,” he said. “I practically live here because I come so often.”

East of 50th Street, gentrification welcomes a new wave of hip shops in Cedar Park. The Satellite is no exception, while its charm is sure to reel in more regulars as it continues to bring locals together.

West Philadelphia is blossoming as a haven for flocks of young professionals and new families who enjoy the duality of pseudo-neighborhood living paired with easy access to Center City. A few blocks west of University […]

Sitting right on top of the historic Dock Street Brewery, inside of an old abandoned firehouse, is a bike shop. Firehouse Bicycles, located on 50th Street and Baltimore Avenue, has come a long way since opening […]