We spoke with the Free Library of Philadelphia’s Northwest Area Coordinator Jeff Bullard, and Andorra Branch Librarian JoAnne Woods about how the Free Library serves the community in the Northwest, and also in what ways the library is changing in the present and future. 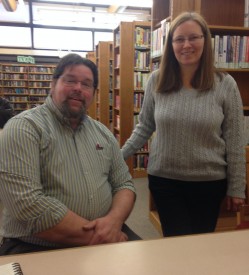 How long have you guys been with the Free Library?

Jeff: I’ve been with the Free Library since 1989. I’ve been a children’s librarian the whole time. Up until 2005, and then I went to Olney and was the manager there, and then I became what is called an area coordinator. The area coordinator is in charge of training, publicity, programming and the programming budget for an area. So I cover the Northwest area, from Nicetown to Andorra, from Oak Lane to Roxborough, a total of 12 agencies in the region. I miss the public, but it’s really fun to work with 12 different librarians. I like to call myself the cruise director, because I don’t do the hiring, firing and payroll, per se, I just keep the boat straight and make sure everybody’s having fun.

What types of events and programs does the Free Library offer for the community? And are there any member-only events? 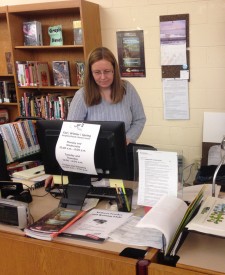 JoAnne: All of our events are open to everyone. Sometimes there are age restrictions. But generally speaking, all of our programs are open to everyone. At this branch, we do story times for various age groups. We have teen programming, which is relatively new at this branch. I guess it’s been tried in the past, but it never really picked up. We’ve been doing teen café, which is basically an open-mic night, and usually everyone who shows up does perform. They all have poetry that they write or a song that they’ve been singing. Some of them come in with their iPods and listen to a song that they like and sing. For adults, there are a couple book clubs who meet here, and there is a knitting club as well. I’m hoping to do more stuff with the seniors, like senior speed dating, where they’ll bring a book with them as a conversation piece. 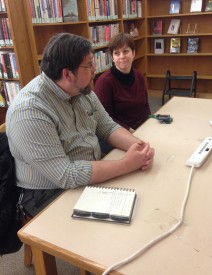 In what ways would you say the community affects the library?

JoAnne: It shapes it. If there isn’t a need for something, we don’t provide it. If there is a need for something, we do provide it. And those needs vary from neighborhood to neighborhood. Prior to this I was working in South Philadelphia, and there was a totally different set of needs. Here, people are looking for new authors to read, healthcare problems and jobs.

Jeff: Last year in 2014, in the Northwest area, we chose medical as a goal. So every branch would have some kind of medical program or programs. Whether it was how to navigate Obamacare, or nutrition, talking about cancer research, or anything with health, and our branches all did that, because those are the things people talk about and the things they ask for, so that’s how the community shapes us. It’s a very fluid two-way street. That’s what the best librarians are doing. They’re listening, they’re hearing, and they react to that. They buy collections that will fit, they find programs or run programs themselves, and it’s a constant thing, it never settles. And if you do settle into a routine, it might be time to think about jazzing it up because you never want it to settle.

How is the Free Library changing with the times?

Jeff: Community organizations making use of the library is a big thing that’s changing. In the past, the library was the curator of a collection. Now, we’re becoming creators of content. So if the community needs healthcare information, we can hire people to come in and talk, or create packets of information from scratch.

JoAnne: And also with e-books and stuff like that, people come in with their electronic readers and they don’t know how to use it, a lot of librarians have made up tip sheets on how to use them.

Jeff:  It’s gotten to the point that the bookstores now tell their staff, if people come in and need instruction, they tell them to go to their public library. We are becoming creators instead of just keepers. 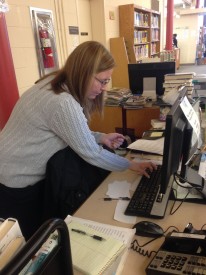 What is in the future plans for the Free Library?

JoAnne: We’re getting ready to change our entire service model to a cluster system.

Jeff: The city was divided into four areas, Northwest, Northeast, West, and North and South were one group. In each of those areas there was 12 to 16 libraries. What’s going to happen now is they are breaking the areas up into smaller groups called clusters, which will each have five or six libraries. In each little cluster, one librarian, like JoAnne here at Andorra, might be the person with the most experience with teen programs, and she would continue to do the teen programs here, but she would also be like a mentor for teen programming for all the libraries in the cluster. Basically, the cluster will become one gigantic library with all the staff from each library working together. The cluster staff will meet regularly, which they don’t do right now.

JoAnne: Fundraising will be much easier in clusters. Philadelphia is so block-to-block, where one neighborhood may have a really active friends group, and they don’t need as many funds, but there might be another neighborhood right down the street that has nothing, so sharing fundraising is going to be great for the system.

– Text and images by Jayson Loose and Kevin Wright.

At the corner of 34th and Brandywine streets is an abandoned church, a sight not uncommon in Philadelphia. However, this church isn’t being left to rot until someone scoops up the property for development. New [continue reading…]

Across from Fairhill Square Park on Fifth and Lehigh streets, Katherine Garcia sat, talking to her neighbors and keeping a close eye on the jungle gym across the street.  In the park was Garcia’s daughter, 12- year-old [continue reading…]