It’s always at least 10 degrees colder by the river than anywhere else in Philadelphia. That’s why Brannon Johnson always puts on an extra layer of socks before leaving her house to set up tents for morning practices at her rowing club. The first few weeks on the water as spring returns to the Schuylkill River are normally hectic as athletes and coaches get their bearings back on the river, but this year has been especially busy.

While most of the city’s sporting programs have been shut down or severely scaled back due to the pandemic, Johnson’s rowing club, BLJ Community Rowing, might have been one of the few in the city that was prepared to move to COVID-19 appropriate practice conditions.

Johnson’s club is situated along Kelly Drive, in the shadow of Strawberry Mansion Bridge, and is known as “the boathouse without walls” by rowers and community members. Because her club initially lacked the funds to build a classic boathouse, the social-distanced rowing machine workouts and water practices were likely an easier adjustment for Johnson and her staff than for others on Boathouse Row.

Not having a boathouse is not the only thing that makes BLJ distinct from other clubs dotted along the Schuylkill River. The BLJ website notes it is the only Black-owned and operated rowing club in America. Johnson’s organization is working to change the face of Kelly Drive.

“I remember someone from Boathouse Row who’s known me for a long time, who’s very prominent and very successful in the rowing world, and he told me why my idea wouldn’t work,” Johnson said of her experience with starting BLJ. “All the reasons why I don’t know enough people or enough of the right people. And I remember where I was standing. I remember what I was wearing. And I remember how I felt. And then fast forward 10 years later, he needed a favor from me because we’re outside. And I gave it to him.”

Rowing as a sport has existed in America for over two centuries. Almost every rowing club has its own boathouse or facility specifically designed to hold the long, thin, delicate racing shells used for the sport. When Johnson started BLJ a decade ago, she wanted to remove the walls both literally and figuratively by making a space where anyone could pick up an oar.

“I think now, I can actually create some of the changes that I wish had been around when I was matriculating through,” Johnson said. “You know, we’re really sort of standing in the gap. I’m really able to change the thing that needs to be changed.”

Johnson grew up in Philadelphia and didn’t consider rowing until her parents introduced her to the sport through the Fairmount Park Community Rowing Program. Johnson said she didn’t initially like it, but her parents knew it could be her ticket to higher education.

“I didn’t really want to do it,” Johnson said. “I was actually a dancer, so I wasn’t into it at all. But once my parents realized that I could go to college, it was kind of no longer my choice.”

After rowing at the Division I level at the University of Texas for four years and traveling to Great Britain to compete in the 2003 Henley Royal Regatta, Johnson came back to Philadelphia wanting to share the sport with her community.

“I’d like to see the Black and brown communities around the river, using the river more,” Johnson said. “And not just for rowing. Like, I’m so adamant that we not do this whole, like, ‘You have to row.’ Just come, and participate, and understand what the recreation opportunities are at the river and with the community. And I think with COVID we’re already starting to see that. I mean, there’s so many more bodies just in our space at the river because it’s the only thing to do.” 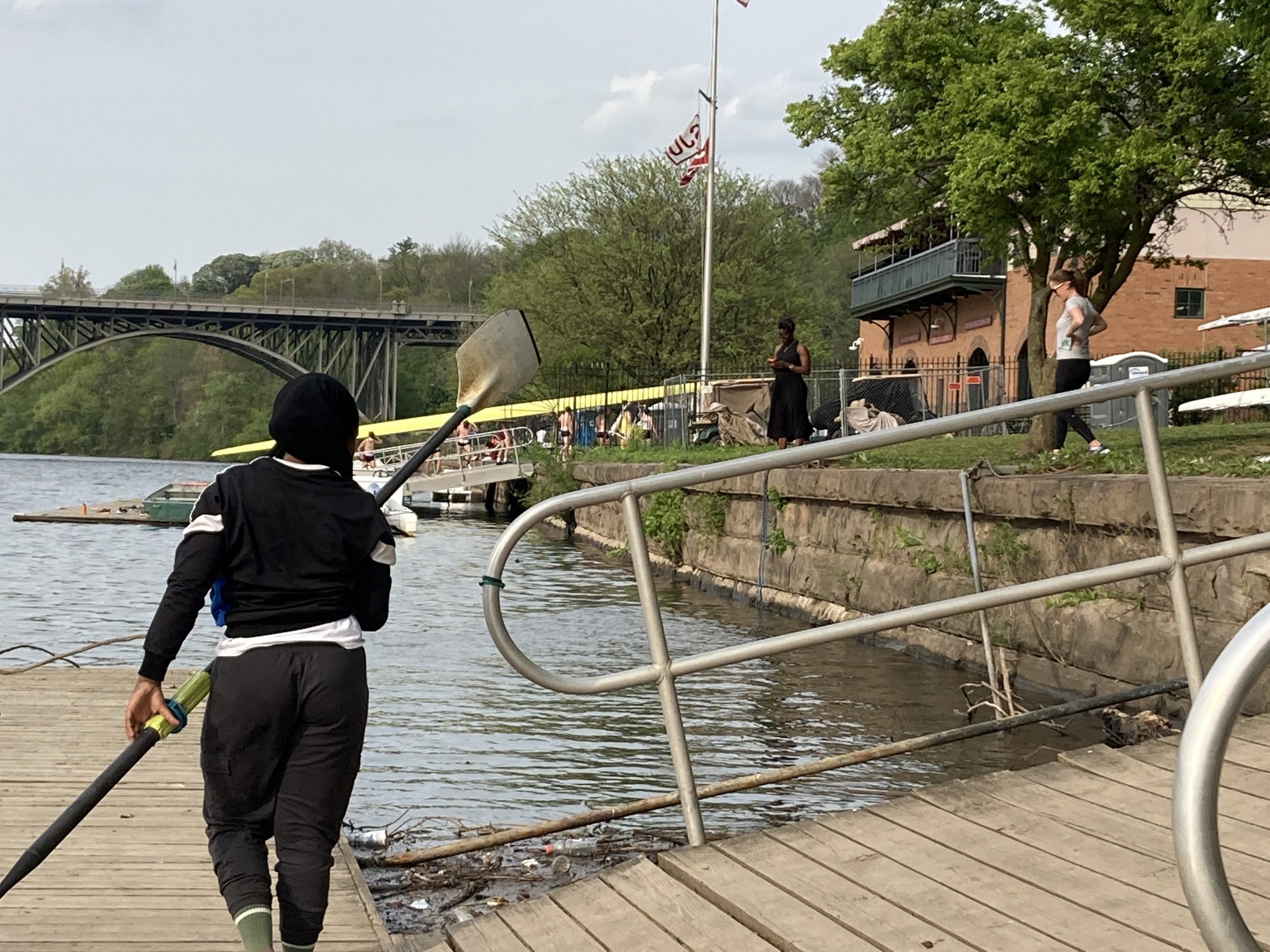 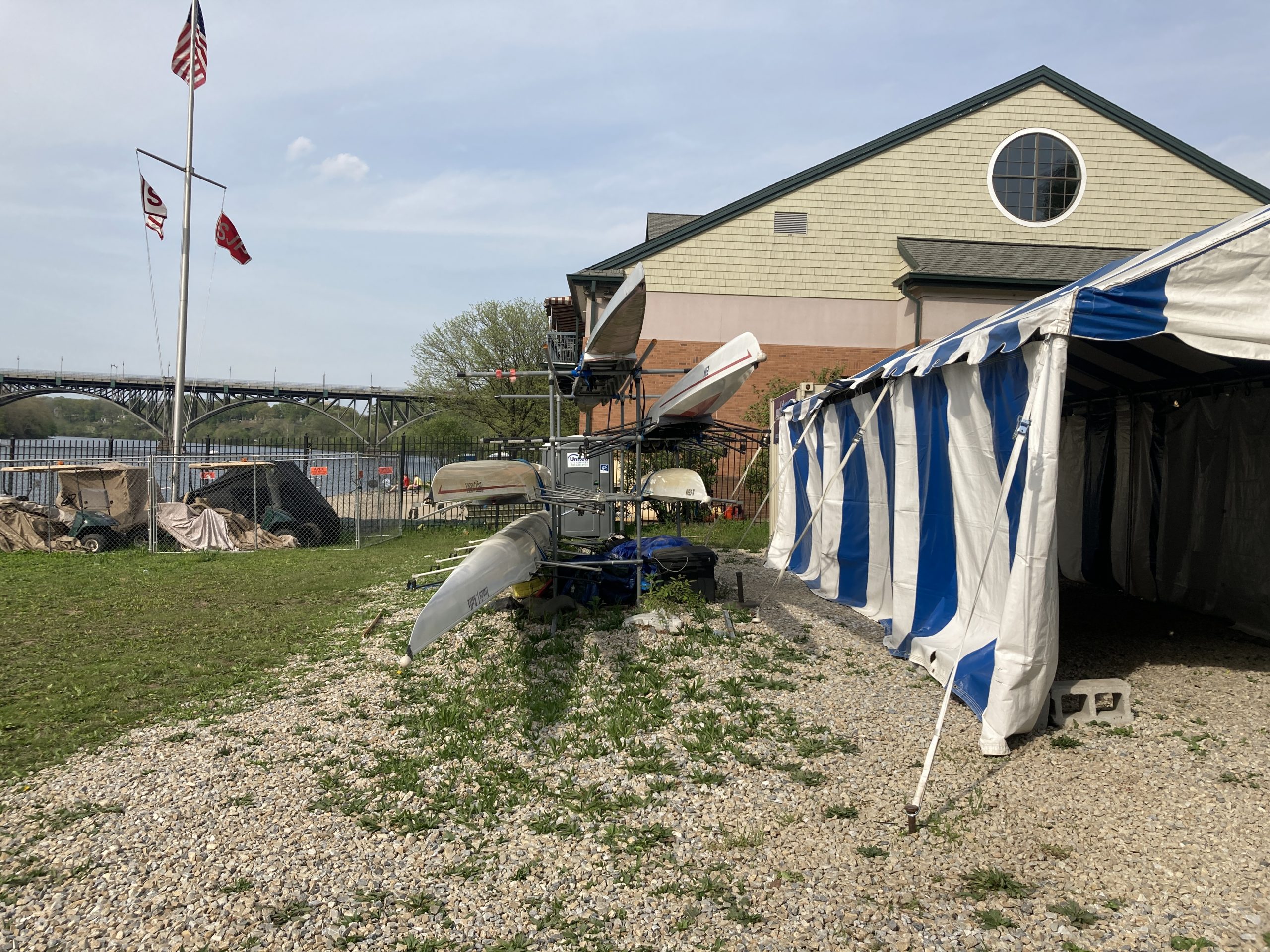 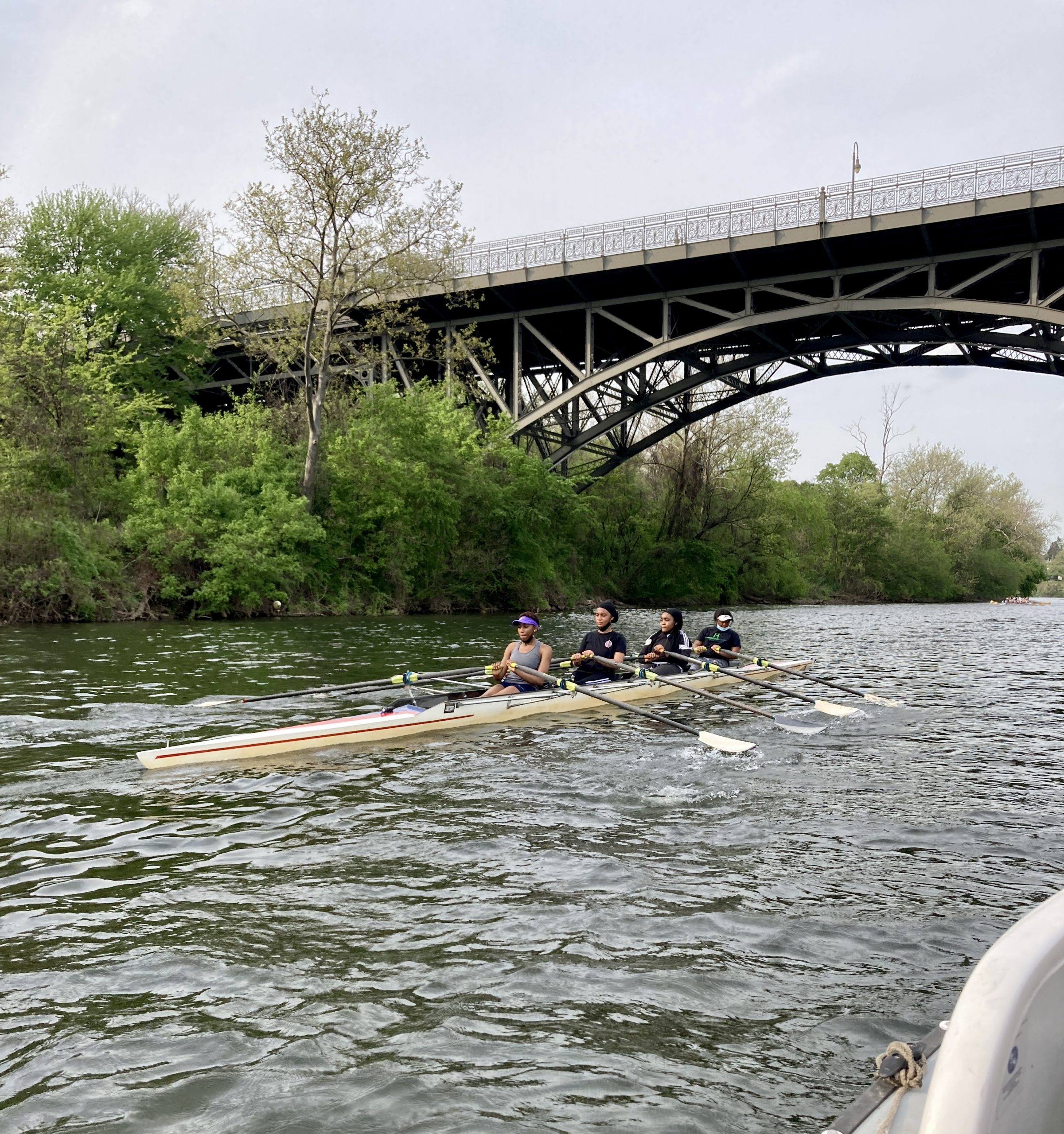 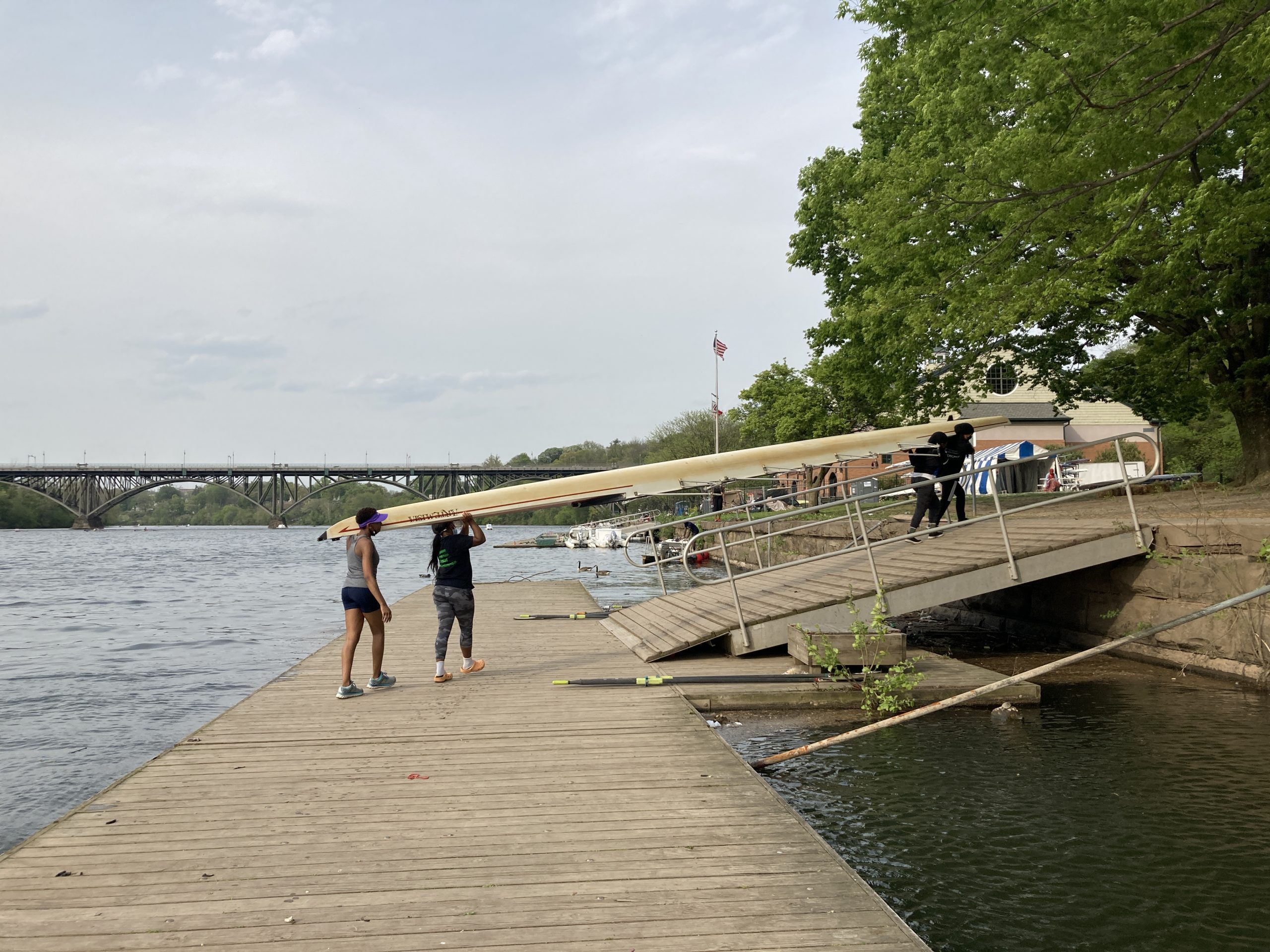 While Johnson doesn’t force anyone who comes to her organization to row, she is still introducing the sport to people who might never have tried it otherwise.

“We currently have a nurse who is in [one of our] programs right now,” assistant coach Tymir Green-Ellis said. “And she’s working 12-hour shifts. And her son is, of course, doing Zoom online. So it started that she brung him to a program, like, to get out pretty much. But now he loves it, and he’s losing weight. He’s gaining fitness. But even though she’s doing 12-hour shifts, she wants to start rowing. So now she’s rowing on top of having 12-hour shifts. I don’t know how she does it.”

Green-Ellis is a recent health sciences graduate of Johnson and Wales University where he joined the crew team during his sophomore year. Since graduating in the spring of 2020, he has returned to Philadelphia to coach the youth team at BLJ under Johnson, has been featured in a Row2k interview, was a guest speaker on the podcast Rowing in Color, and became a Boathouse Sports brand ambassador last fall.

He’s also training for his goal of joining the national team.

Rowing in Philadelphia during the summer of 2020 exposed Green-Ellis to a jarring disconnect between the treatment of Black Philadelphians and the vast majority of the people on Boathouse Row. But it also sharpened his resolve and focus to see his goals through.

“It really messed up my mental health as far as like, being within rowing and just being in [such] different spaces,” Green-Ellis said. “I began to contemplate, hey, maybe I should quit rowing. There’s no diversity. But, after coming back to BLJ in August and starting coaching at St Benedict’s High School, seeing more diversity in rowing … That kind of inspired me. And it brung me back to feeling like, hey, I actually do want to continue my goals to make the national team.”

While the sport continues to grapple with issues around accessibility and exclusivity, for those who are able to participate, rowing offers athletes a mental, physical, and technical challenge, as well as incredibly tightly knit communities within each team.

“I think the sport itself is incredibly unique,” St. Benedict’s Prep school rowing team head coach Craig White said. “In terms of the sacrifices you have to make in order to be successful, the discipline, the focus, the determination.”

Craig White, a Black coach and friend of Johnson’s, frequently runs into her at junior regattas, the two often racing against each other. White has also seen both the best and worst of the sport. As a student he was able to enjoy the camaraderie among his teammates as they all worked toward the common goal of championship titles.

“It kind of felt like home for me, being with that group and having an opportunity to make friends with those people,” White said. “It was very, very rewarding. The men that I met my freshmen year are still my friends to this day.”

But White has also faced many struggles in order to build his rowing team over the past 11 years at St. Benedicts, a predominantly Black preparatory school in Newark, New Jersey.

“Our headmaster was open in his lack of support and desire to have a crew team, partially because it’s expensive,” White said. “There was like this underlying current of, you know, that’s just not what Black people do. Like, we run track, we play basketball, and maybe you play baseball, and like soccer.”

While he was initially pleased to have even created a team under such inhospitable conditions, White resists the urge to ever make it too easy for his athletes.

“Are you teaching this child, this young adult, how to survive, and how to thrive?” White said when asked about his coaching philosophy. “And how to win, you know?”

He admits that some simply come for the familial aspect of a team, but for the ones who might want more, he views it as his duty to push them.

“And those are the types of questions that I asked myself,” he said.

White focuses his coaching style on preparing his team to take on massive challenges on and off the course.

“If we want to diversify the sport and we want to increase the roles of participation, not just participation and inclusion, but actually seeing African American and Latino men and women on a national team at some of the most prestigious universities in the country, like Temple, like Harvard, like Princeton, is it possible?” White asked. “How do we get there?”

White, Green-Ellis, and Johnson all have their desire to advocate for the passions and dreams of the Black and brown kids that they work with in common.

“My stubbornness just comes from the fact that the kids care,” White said. “Anything that kids are willing to put time and energy and effort into, in my opinion, anyway, should be invested into. And if you’re not willing to, you know, support that type of motivation and focus and determination in a child, then why … What the fuck are you doing?”

Green-Ellis has worked as an assistant coach for both Johnson and White. Having entered the world of rowing in a smaller New England college, Green-Ellis never wants his athletes to feel as isolated within the community as he has, even within the last few years.

“I would say my vision would be just seeing more Black and brown kids within different spaces,” Green-Ellis said. “Like, to be honest, every boathouse on Boathouse Row that I walk into, that’s nonexistent.”

There are preconceptions, real or imagined, around the identity of the sport and who it is for.

“I think being Black and growing up in a very, very White space I had to downplay so much of my personality, and downplay my difference, and downplay … You know what I mean?” Johnson said. “Like, I had to stand up slowly and, you know, pretend to like White girl things. And it’s a lot. BLJ Community [Rowing] is the first space where I just get to be fully me.”

Johnson’s purpose since the beginning has been to emphasize and create spaces of inclusion for every kind of athlete.

“I would say, watching the youth program grow has shown me that we’re here to stay,” Johnson said. “You know, I think I fight so much harder for these Black kids, because I know what life is gonna be like for them, and I know how much it stacks up against them. And I want to be a place that helps them navigate that, and so I think it makes it definitely makes me fight harder.”

– Please email any questions or concerns about this story to: editor@philadelphianeighbors.com.

https://vimeo.com/38465910] The Philadelphia Corporation for Aging funds many senior citizen centers throughout Philadelphia, but only one in Germantown. Located at 5818 Germantown Ave., Center in the Park is a senior center that provides supportive services [continue reading…]