Spending a day in “El Bloque de Oro” will have you thinking you’re in a tropical Caribbean island. Fake palm trees sit on every corner down North Fifth Street while store signs are read in Spanish.

It is very possible to spend the entire day in this neighborhood and function perfectly only speaking Spanish while immersing yourself in the rich Latino culture that the block is famous for.

The area between Somerset Street and West Lehigh Avenue on North Fifth Street is well-known for being the hub of the Latino community in Philadelphia and hosts a variety of Latino-owned shops and community service organizations. The mission of these shops and organizations is to improve the neighborhood and maintain its rich history and culture.

Gibert Alfaro, the district manager for the Hispanic Association of Contractors and Enterprises, plays an important role in helping residents and businesses thrive in El Bloque de Oro. HACE revitalizes the neighborhood by helping businesses and providing low-income housing to residents in need.

“Not only do we have one nationality, we have a hub of different nationalities,” Alfaro said. “There is such a rich heritage through what Taller Puertorriqueño does with arts and culture.” El Bloque de Oro is beaming with Latino culture Alfaro said.

The store has witnessed the neighborhoods shift from a majority German-American population to a mostly Latino population. Cristina Gonzalez’s store is lined wall to wall with CDs and cassettes. The speakers outside make it impossible for any Latino to resist peaking their head in to check out the store.

To Gonzalez, the North Fifth Street corridor is without a doubt the hub of the Latino community in Philadelphia.

“The way the neighborhood got its name is because back in the day there were a lot of Latin-owned jewelry stores,” Gonzalez said. “Then the bodegas started coming in and our music shop and other cultural things like the Taller Puertorriqueño and HACE.” Shortly after Latinos migrated to the area and more shops started to open up according to Gonzalez.

Centro Musical helps the community through programs and remains one of the go-to spots in the neighborhood. “We remain a hub of the Latino community not just because of what we sell but what we do,” Gonzalez said. In the past the store has hosted food drives and toy drives for the community.

After an early day at work, Carlos Rodriguez took time out of his day to visit friends and check out the new music. “They’ve been here many years. It’s like an icon of el Bloque de Oro,” Rodriguez said. They have everything you need in this store, music or instruments. Anything you need that’s part of the culture, they have it here.”

El Bloque de Oro is also a popular destination for Latinos in the tri-state area. Jose Figueroa, a longtime resident of the area, has seen the dynamics of El Bloque de Oro change in the last 37 years. 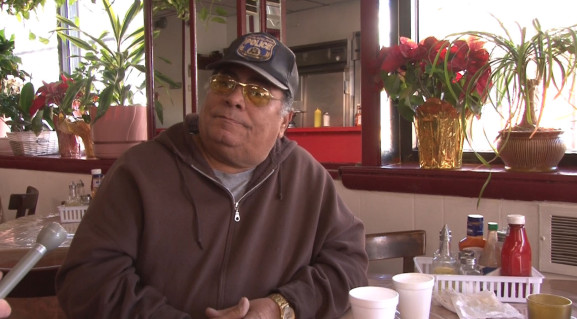 Jose Figueroa has overseen the block’s transition as a police officer and a resident for the past 37 years.

“There is more progress. They’re opening up more stores around here and the people are happier,” Figueroa said. “Latinos come from Bethlehem, Trenton and New York to check out El Bloque de Oro, to check out the stores, and the neighborhood.”

Katherine Heilman, Development Associate at Taller Puertorriqueño, is glad they can provide a place for Latinos to come and appreciate art made by fellow Latinos.

“People have a space they can come into like this amazing gift shop where you see things you won’t find anywhere else in the city,” Heilman said. “Having a gallery up there for people to come to and experience high quality art that’s applicable to them. That is amazing to me.”

Like Centro Musical, Taller Puertorriqueño receives high praise from residents and fellow businesses. “People don’t come in and say you guys are cultural hub of the community. So it’s nice to hear it,” Heilman said. “It’s something Taller has been shooting for these 40 years”.

https://vimeo.com/49519327] “We’re sort of a gateway between the outside and the community, and it’s a way for the community to know what’s happening outside, connecting to North Philadelphia,” said Rafael Damast, the arts program manager […]

A law in Philadelphia could have stopped Eric Perfect’s Kadillac Tattoo from opening across the street from Mount Airy Presbyterian Church. However, Perfect, with such a conglomeration of tattoos speckled across his body that it […]