Want to hang out with a few of your church leaders from Gloria Dei the Old Swedes’ Episcopal Church?

Look for them at the bar.

“We grew the hops ourselves,” said Paula Minacci, one of the two church sextons. “Literally right here in the neighborhood.” 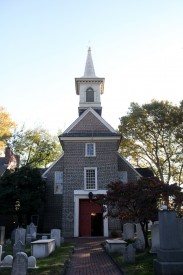 ns to the community, even the beer drinking community.

Gloria Dei is better known as the Old Swedes in South Philadelphia. Located in Queen Village, the church is the oldest church in Pennsylvania and the second oldest in the country. The church has been used since 1700. It was restored in 1846 and has barely changed visually since then.

On the other hand, there have been many changes for the Old Swedes community and for the parish.

“The church, in general, is more open to change, which is always hard for churches,” said The Reverend D. Joy Segal, who had worked at two churches in the suburbs before coming to Old Swedes. “It really brings together the community because the outside events we do are bringing them here. We can create a stronger community and better if we can get members from Queen Village and Pennsport here.”

Vicki Cusack, the parish administrator who was once just a community member, loves the versatility in her job as well as the community.

“This is a very peaceful place but you never know what’s going to walk through the door,” Cusack said. “Every morning I sit down and anybody could come in – a bride who is so excited that she found her church or someone who just lost a loved one and needs to talk about the funeral. Or it could be someone who comes yelling in here, ‘I FOUND IT’ because they found a gravestone they were looking for. You just don’t know.” 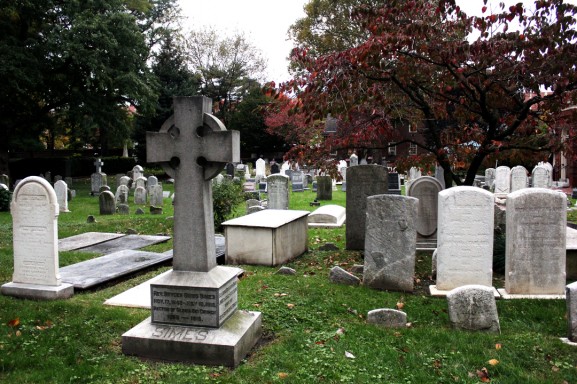 Old Swedes is a different place to different people. The grounds remain open 24 hours per day, seven days per week.

The grounds are open to dog-walkers at all times and has now been seen somewhat as a dog park for community members. Not only that, but it is a space that people are able to rent out for their own events. The church also offers everything from tai-chi, jazz shows, a “Blessing of the Animals” to many holiday-themed events including a Memorial Day event that attracted more than 700 people.

“If we were in some little country town, this place would be banging,” Minacci said.

Reverend Segal came from a corporate background, which sounds unusual for a reverend so passionate, but her administrative and management background has helped further shape her into a community leader.

“I don’t like to micromanage,” Segal said. “This community needs to create their own vision, not mine. My job is to enable them so they can create that vision. So, that means going to the events opposed to managing or planning them. Its important people see me and recognize me but I don’t want to overshadow them. This is their community. Their vision needs to grow.”

As a church, Old Swedes remains a place for people to restore their faith and to worship. But for those who don’t celebrate God in the same way or who have a disinterest in church, it can be something for them too. Old Swedes has made its place to be a spot where anybody in the community can find an interest and go simply for community bonding.

– Text, video and images by Monica Miller and Chelsea Finn.

Art is being taught, seen and bought in a plethora of ways in Queen Village. The Fleisher Art Memorial, which is one of the oldest community art schools in the country, has more than 70 [Read More]

Archdiocese Catholic school students found a new document slipped into their application and entrance packets: The Memorandum of Understanding. The decree, released earlier this month from the office of the Archdiocese of Philadelphia requires all [Read More]

https://vimeo.com/68245164] It is not uncommon for a church to reach out to its community. Known for its golden dome architecture, the Ukrainian Catholic Cathedral of the Immaculate Conception is no different. When the church opened [Read More]