People’s Emergency Center, or PEC, has been a helping hand to the community for many years. Most known for its abundance of programs for helping families, PEC has now taken on small businesses.

The dedicated staff provides many businesses the help they need to start up and survive as they help to rebuild the commercial district on Lancaster Avenue.

PEC runs a host of programs for the community. Founded in 1972, the organization began as a shelter for homeless families and single women with children and continues these programs today.

Although the transition into including many more programs to help the community was not difficult for PEC, it was hard to explain why the agency was doing this.

“We’ve been in this neighborhood 30 or 40 years,” said Meg Lemieur, PEC marketing coordinator. “And it’s been a while for people to understand why an emergency center would be doing community work. It’s part of my job to let the neighborhood know.” 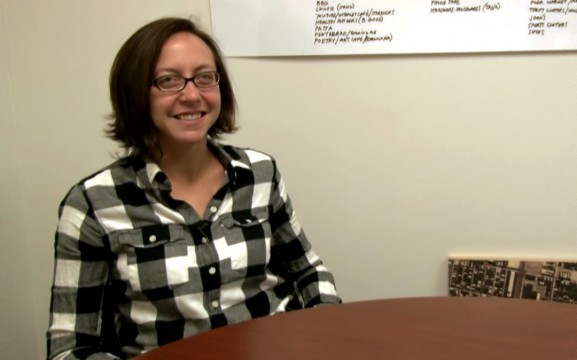 Lemieur (above) has helped the organization keep up with the times. Having been involved with graphic arts and advocacy work for several years, she joined the organization last March. She has streamlined the newsletter from many leaflets into a small book, and made PEC more widely known, especially the Community Development Corp. (CDC) division of PEC. The CDC helps to revitalize the neighborhood through attracting new businesses, enhancing the look of the neighborhood and keeping it clean and safe.

“I think just letting the neighborhood know what the PEC CDC is, is important,” said Lemieur. “PEC is doing housing development, and housing for the neighborhood and low-income housing. You know, you can get facade work done and figure out how to pay your bills better. You can do all these different things using the CDC, as kind of a tool to navigate through those systems.”

Lemieur also says PEC supports a lot of the arts and culture in the area with a few arts initiatives. One such program, the Neighborhood Time Exchange, will be coming up on 4017 Lancaster Ave. The project will provide studio space for 12 artists where, in exchange for every hour spent there working, they will have to donate an hour to the community throughout 2015.

“We have a whole list of people that know what the neighborhood needs, like creating an after-school computer class or coaching soccer,” said Lemieur, “or whatever else the artist does in life, we can utilize those other skills, so it’s definitely a neighborhood and art exchange.”

The organization has not been light on opportunities for new businesses. These opportunities range from connecting owners with landlords for suitable homes for their businesses to help with creating marketing plans.

James Wright, corridor manager, helps bring these programs to the community. Wright finds people who want to be business owners and shows them what they could do in West Philadelphia, and what resources PEC has to lean on to start a business.

While currently trying to get restaurants to come to the corridor, PEC wants to create some buzz for the community, and start its track to becoming a stable and popular spot in Philadelphia.

Throughout two neighborhood planning processes, one in 2004 and 2012, neighbors said they wanted more sit-down restaurants, according to Wright.

“Right now there is a ton of take out Chinese stores,” Wright said. “We have some Jamaican restaurants, some grill-based businesses – breakfasts, pancakes, turkey sausages. They’re all great, but after a while people want a little diversity, and so that’s what we’re reaching for.” 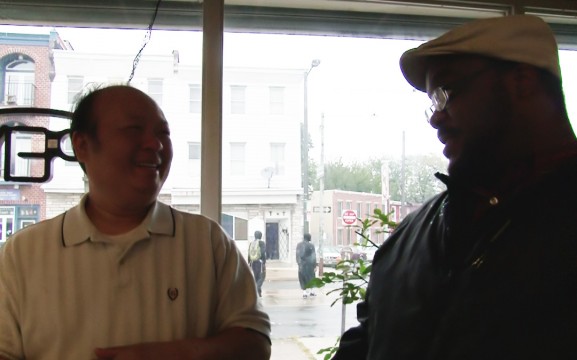 Danielle Green of Indigo Bleu Design Concepts has specifically benefited from PEC. She says it helps in every way possible, even little things like bringing her 10 extra chairs for event at her art gallery.

“If not, I would have made 10 people stand for a few hours,” Green said. “I feel like being in this area just so far, having PEC as a partner, both from a social side and from a economic development side, it’s been great and will help continue to fuel my business.”

“For the longest time, I think there was this feeling that I live on a block that was dead,” said Nate McEntire, owner of Body Rock Boot Camp, a gym on Lancaster Avenue. “James, when he came through, has done a lot with PEC … none of which has made me decide or start thinking, yeah everything’s changed now, and is going to work out for the best or this is going to be the new epicenter of business in Philadelphia. But there is a stability of events where you can see there is a possibility for that happening.”

Wright believes that as the corridor improves, more people will come.

– Text, video, and images by Alyssa Cassium and Darian Muka

The Community Education Center, located at 3500 Lancaster Ave., is a nonprofit organization founded by community members in 1973. Housed in a former Quaker school and meetinghouse, the building is now filled with artists of [continue reading…]

The historic Fairhill Burial Ground held its fourth annual astronomy night on April 26, an event where children and adults from the neighborhood are encouraged to come out and join Astronomer Denise Vacca to take [continue reading…]

When walking through Strawberry Mansion, you may notice an overabundance of vacant properties and abandoned houses. It was not always like this. Due to redlining, a racist collusion between banks and city government, where people [continue reading…]