On a sweltering June afternoon at her Rising Sun Avenue office, Philadelphia Councilwoman Marian B. Tasco’s administrative assistant Kathy Wersinger received a phone call from a man living with his wife in a nearby apartment complex. He told her that he and his wife were hungry, and asked whether she had any leads on where to find a meal.

Wersinger provided him with the names of three places, then took down his phone number, promised to check in if she didn’t hear from him, and instructed him to call her back and let her know how things went.

After hanging up, she phoned a fellow member of the Lawncrest community association. The association asks members to bring canned goods to all regular meetings for local food banks. Wersinger asked that some of the goods received from the meeting that evening be set aside for the gentleman she spoke with.

“I was lucky enough to never go hungry in my life,” she said after finishing her call. “I don’t ever want that to be me, and I don’t want it to be anybody that I know, either.”

Wersinger is both a key player in the Lawncrest community, and a prime example of the neighborhood mentality.

Lawncrest is a neighborhood that banded together under pressure (last year they received an avalanche of negative press following a string of murders), and continues to look out for each other today.

Throughout that community, the idea that the neighborhood needs to be looked after and preserved is prevalent. Perhaps the greatest example of this is the annual 4th of July Parade, which is celebrating its 100th anniversary this year.

Every year, planning committee members say, is a struggle to produce something on a large scale. Their biggest competition is the Center City fireworks display, which receives bigger sponsors and has more resources.

“If we could have Wawa like they do,” said Wersinger, “we’d be good to go.”

“People go where the money is,” said Stephen Cartledge, head of the Lawncrest 4th of July planning committee. “So we’ve reached out to local drill teams. It’s not a string band, but we can get five of them for the price of one string band. And the local people that we have, we keep them. They do it every year.”

“People come back to Lawncrest for the parade,” said planning committee member Jean Pleis. “Even if they’ve moved away, they’ll bring their families back for it.”

Nobody in this section of the city pretends that the area hasn’t faced hardships, but nobody seems to be discouraged by them, either.

“You have to just let criticism roll off your back and move on,” said Pleis.

The parade may not be on the same scale as Center City, but it’s nothing to look down on. Only 10 percent of their annual budget of nearly $30,000 is funded through grants from the city council. The other 90 percent is donated through local sponsors or individual contributions from residents. 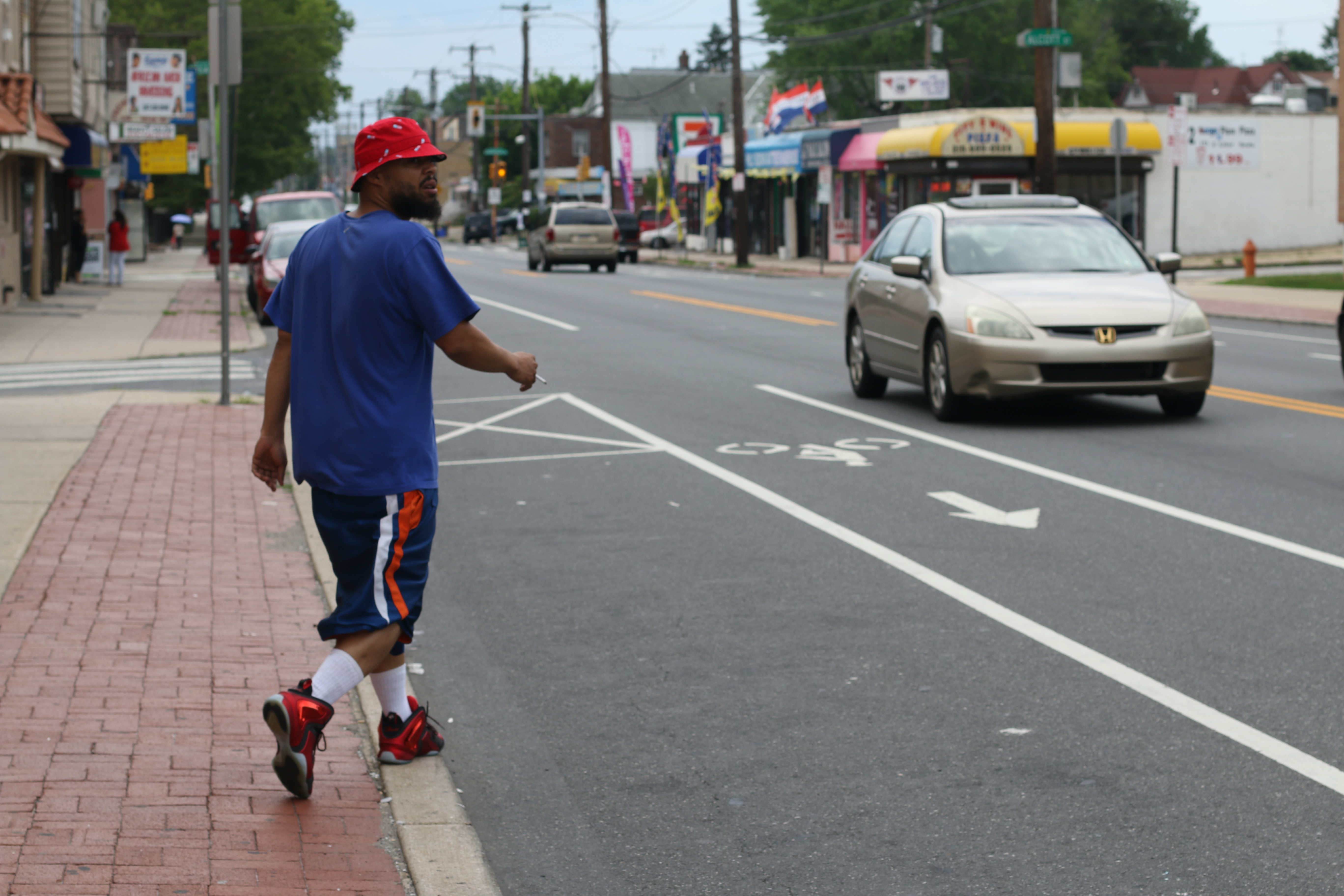 <
►
>
Raffle tickets are one of the ways in which the planning committee raises money for their fireworks, which cost as much as $13,000 per year.

The event typically draws between 1,000-2,000 people for the parade, and approximately 5,000 attend the activities and fireworks which take place at the Lawncrest Recreation Center (known around town as “The Rec”). Car shows, flea markets, paintball and dunk tanks are just some of the attractions that it offers.

For an event that’s produced by approximately 15 people, it’s quite an accomplishment.

With regards to last year’s murders, Wersinger and other town residents are adamant that this isn’t representative of the neighborhood’s true nature.

“Good things happen here,” said Wersinger, with an edge to her voice. “But nobody ever talks about them. If somebody pulled a gun out in town, how fast would the papers be down here?” 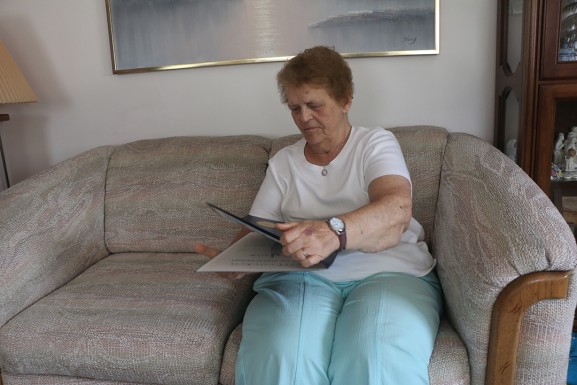 “It’s a shame,” said Kramer. “[The papers] sure know where we are when there’s a murder or a robbery, but they don’t recognize our parade at all. There’s a lot here for people.”

Whether it is a response to the events of the last year or not, there is a sense of camaraderie at every town event. A June 16 community association meeting doubled as a neighborhood cookout, with food donated by a local grocery store. More than 100 residents attended. 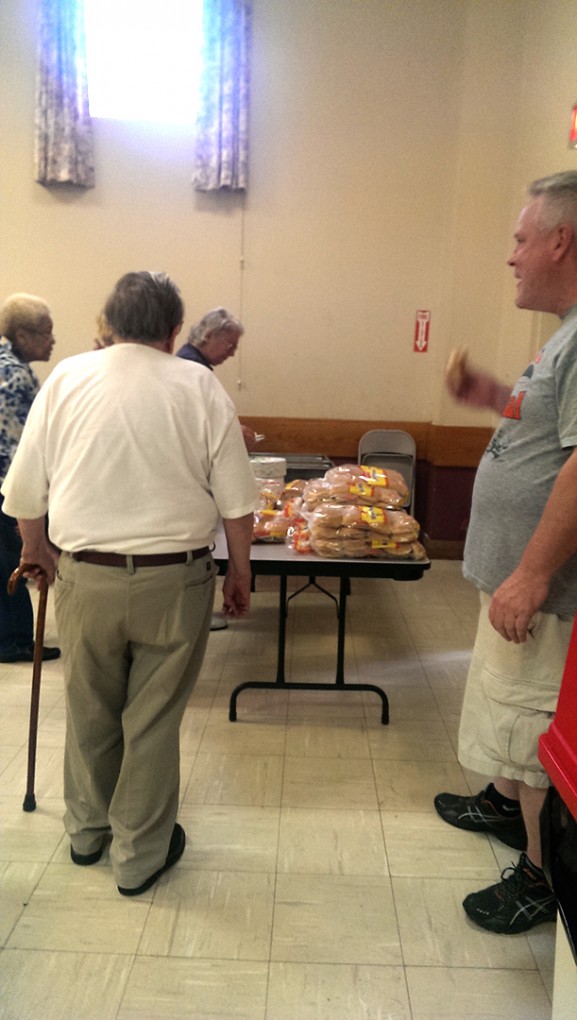 During the meeting, a member of the local police force read off some of the most recent crimes in Lawncrest. He described an incident in which a would-be mugging victim fought off his attacker, and the entire room erupted into applause.

Another resident stood up and explained that he had received a scam phone call, and that the caller hadn’t thought to block his phone number. As he said that, many people in the room laughed and pulled out a pen as he read out the scammer’s number.

Kramer (below, in white), a resident of Lawncrest for more than 80 years, was grand marshal of the parade three years ago, along with her husband Art (in white, on top seat). Although they aren’t on the planning committee, Wersinger says that they’ve always been involved in their neighborhood. They’ve been members of the community association for more than 20 years.

“They were chosen because of their level of dedication to the community,” said Wersinger of the couple, who were both given a citation of honor from the Philadelphia City Council after their appearance in the parade. Art has another for his work on the zoning committee.

“Have you ever seen one of these before?” he asked, after pulling out their three blue city council folders. “They’re not really that hard to come by,” he continued with a shy grin and a wave of his hand.

Neither of the Kramers have any desire to brag about their contributions to the community. Like Wersinger and other residents, it’s just a way of life to them.

“Not everything is about getting something back for yourself,” Peggy said, when asked about her actions. “It’s how you keep your community alive.” 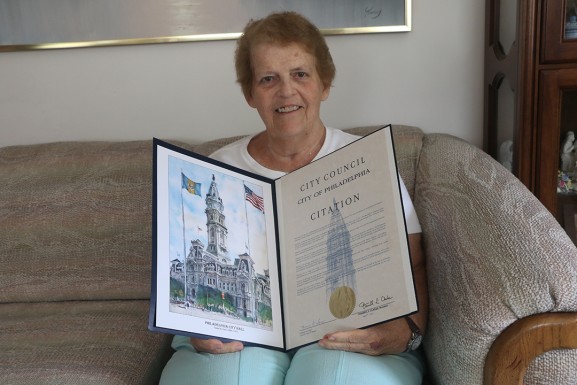 Kramer is, however, quick to praise Wersinger’s presence in the neighborhood.

“I don’t think there’s a single person without a home in Lawncrest that Kathy doesn’t know,” Kramer said. “She’s always out and about.”

At the community association meeting, in preparation for the parade, guest speaker Sue Snyder read a brief history of Lawncrest and its 4th of July celebration from a community profile, which Wersinger checked out from their local library and keeps in her office.

Wersinger discussed a time several years ago, during which the Lawncrest branch of the Free Library of Philadelphia was slated to close.

“They had these turnstiles in the library then, that would count the number of people who came through, and they said there weren’t enough visitors,” Wersinger recalled. “So me and some people from the neighborhood, we would go in and just do laps through them.”

The library is still alive and well today. 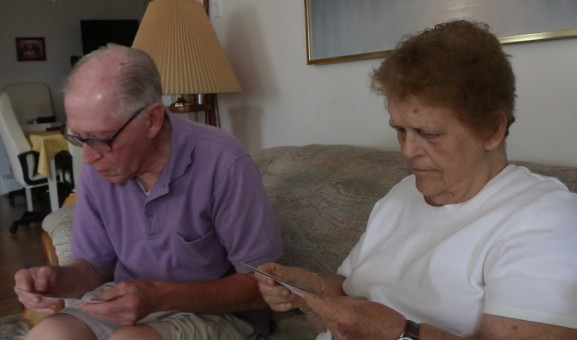 The do-it-yourself attitude is what gives Lawncrest its character. Wersinger, Cartledge and Pleis are among the people who go out in person to raise funds for the parade. They celebrate every donation as though it were funding the entire event.

“We don’t have a newspaper at all, much less one that the people who don’t speak English could use,” said Wersinger. “So it’s hard to get the word out about the parade to everybody.”

One of the issues that the community faces is bringing together residents of a diverse section of the city. The subject of a 2012 PhillyRising action plan, this specific area of the neighborhood is now home to a population of more than 57 percent African Americans and more than 20 percent Hispanics or Latinos. The longtime residents, who are largely Caucasian (the area as a whole is just shy of 60% white) reside on streets outside of the action plan zone.

More significant that that among residents, however, is the changing age demographics. Census data shows that between 2000 and 2010, the number of residents under the age of 35 living in the neighborhood increased by approximately 5 percent. In 2000, the population of residents aged 75-84 was 8.4 percent, and in 2010 that number had been cut virtually in half, down to 4.8 percent.

The number of renters increased as well. In 2010, there were 1,097 more housing units in the neighborhood occupied by renters than there were in 2000.

Rather than be bothered by the diversity, these longtime residents expressed a desire to involve everyone in the community.

Kramer is also aware of the changing demographics, and expressed a hope that the younger individuals living in Lawncrest will understand the importance of their traditions.

“We are a small town, when you think of it,” Kramer said. “I just hope the young people pick up where we leave off.”

Longtime residents remember past parades fondly, and continue to look forward to more.

<
►
>
The Golden Sunrise Brigade marching band in an early '80s parade. The band had a "Cats" theme that year.

“It’s one community giving itself one big party for the Declaration of Independence,” said Hank Baumgartel, a Lawncrest resident and planning committee member. “The people are fantastic, the love is great and the respect for one another. It’s the best neighborhood I’ve ever been in.”

-Text, images and video by Alyssa Luchette and Casey Kallen.

-All images of parades courtesy of Kathy Wersinger.

The Police Athletic League of Philadelphia was created in 1947 by a police sergeant who wanted to create a baseball team made up of neighborhood kids who wanted to play. Since then, PAL has worked […]

Brewerytown is an attractive neighborhood to people looking for the cool, new hot spot to live. Its accessibility by public transportation and its proximity to Center City and Fairmount Park have made it an enticing […]

The Frankford branch of the Boys and Girls Clubs opened in 1938 and has been serving the youth of Frankford ever since. “I’m 61 years old and I started coming here when I was 10 years old,” […]