The primary way democracy thrives and survives is through fair elections. But who exactly is making sure the elections are fair? Is it some far off big-moneyed or well-connected power player? Nope. It’s people from your neighborhood. And if it is not folks you know then it should be you.

The people making sure elections are fair sit at the table where you vote. They check you in, set the machine up and make sure your vote counts. They also make sure other people don’t pretend to be someone they are not and vote illegally. This is why the system is design to have local people manning each polling location.

Most importantly though, they watch each other.

“They are the most important … elected officials,” said Al Schmidt, city commissioner. “They are in charge on Election Day.”

The city commissioners oversee the election process in Philly. They deliver the machines, tell voters where they need to vote, make sure that location is open and certify the vote count after the election. But another component of their job is to make sure your polling place is properly staffed on the big day. With 1,686 divisions that’s no easy feat.

“We can’t hire or fire [the local election board],” Schmidt explained. “It is important to have a full board.”

On the important part is board members watching each other.

“Ideally [members of the board] should be from different parties,” Schmidt said, “for checks and balances.”

Having representatives from each party makes it difficult for voters from the opposite party to sign in a vote, to allow a person from their own party to vote despite not being properly registered or to enter the voting machine and vote multiple times.

Unfortunately in Philly, Schmidt said, many boards are from the same party and sometimes related to each other. 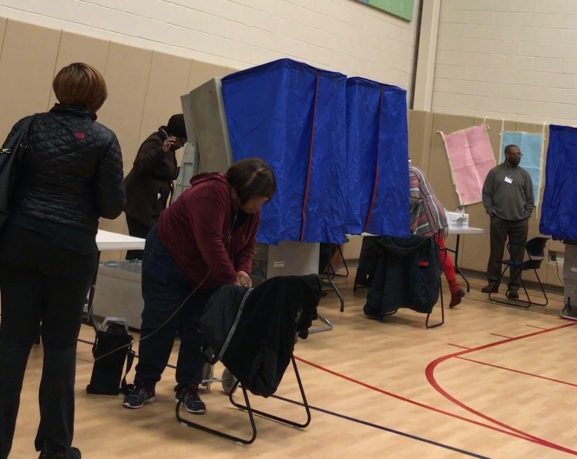 So how to keep it fair in your community? Well this year is the election year for the election board, so bring a pen to the poll and write yourself in for judge-of-elections or inspector. If no one is on the ballot, you’ll probably win. The commissioner’s office will notify the winners, give a training date and provide a booklet to answer any questions. A trained judge is paid $130 for their service on Election Day, inspectors receive $125.

The application for a machine inspector position can be found online.

According to data from the city commissioner’s office, there are about 200 vacant judge spots and about the same for majority inspector. Minority inspectors, which are mostly Republicans, have more openings, almost 500. You don’t need to be Republican for minority party positions (in several divisions the Republicans are actually the majority). The city would be happy to have more Greens, Libertarians and Independents too.

The ballot is open for all positions in many divisions this year. There are only 941 Democratic candidates for judge and 94 Republicans (that’s at least 650 open spots). Less than 900 Democrats and less than 300 Republicans are up for inspector. All elected positions are for four-year terms.

“It’s a great way to get involved,” Schmidt said, adding that aspiring politicians can get their feet wet with an independently elected office that doesn’t require a political action committee.

Election Day this year is Nov. 7.

The Millennial generation makes up about 31 percent of the voting population for this upcoming election. For this current election cycle both the Republican candidate, Donald Trump, and the Democratic candidate, Hillary Clinton, have voiced […]