Neighborhoods change quickly if no one is paying attention. Many people have heard parents or grandparents talk about how an area “used to be.” Communities like Mayfair, Kensington and Oxford Circle struggle with increasing crimes and quality-of-life issues every year.

Changing demographics through aging, gentrification and lack of employment opportunities are just some of the many factors that can unsettle a community. No one person or small group of people can change all of that on their own. But citizens can take steps to stabilize their immediate environment.

One way to combat the negative changes is to start a Town Watch. Contrary to popular belief, town watch patrols are not necessarily groups of people driving around the neighborhood with walkie-talkies in the middle of the night. Community members can actually do it from home.

But those with experience in organizing neighborhood watches would rather you not be in harm’s way anyway.

“We don’t need no heroes,” said Bill Summers, a community support specialist for Town Watch Integrated Services. “Be safe and take care of yourself.” 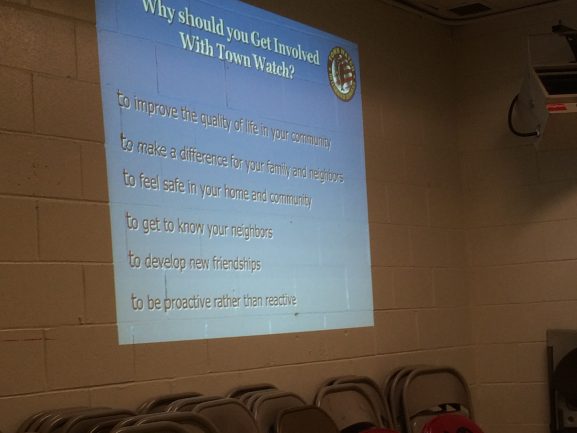 Summers led a training session at the 24th/25th Police District building recently. He told the group of aspiring town watchers that they need people to observe, document and report.

Summers further elaborated about what citizens need to think about when encountering trouble in their neighborhood. 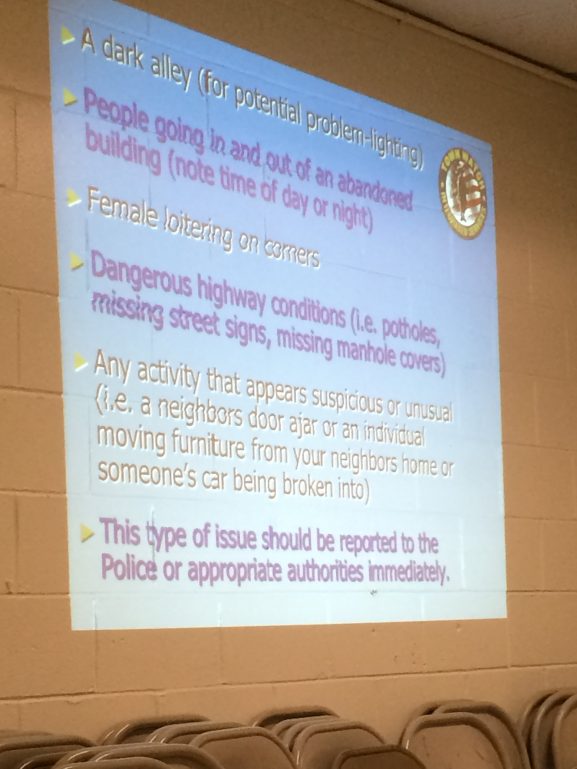 Reporting specifics to the police can help ensure a prompt response. The 24th Police District Community Relations Officer Tina Willis sat in on the meeting and explained that 911 calls are taken by trained civilians, not police officers.

“You need to articulate,” Willis said. “When you’re give a description start from head to toe,” adding that details like tattoos are helpful because those can’t easily be altered.

“Try to find something that can’t be changed or something out of the ordinary,” Summers elaborated. “Someone’s [clothes] can be changed.”

“Ears are like fingerprints, no two people’s look the same,” he said, adding facial structures like raised noses and close-set eyes are also helpful.

The hour-long training included advice on learning about address specifics like whether you are on the east side or west side of a block to using action words. Folks also need to write down what they saw before chatting with neighbors about it.

“Your opinion changes,” when you hear other versions of a story, Summers explained.

So how to get started? 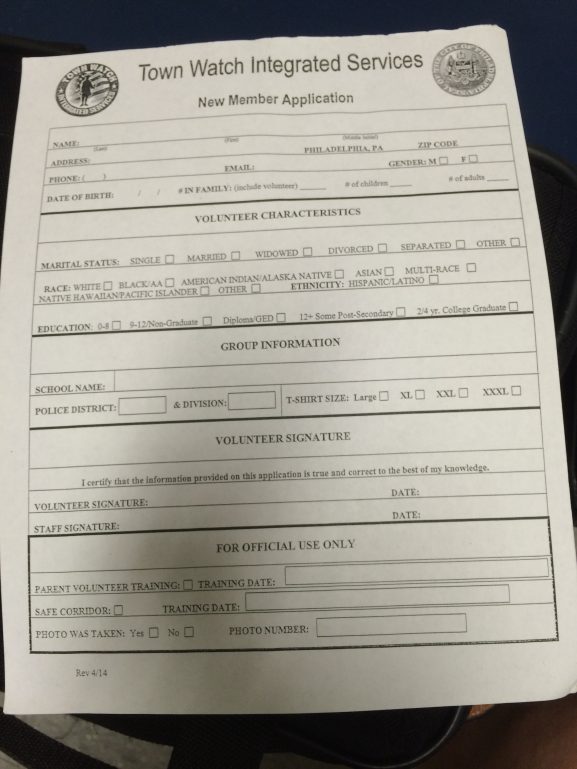 The first step is to look for a meeting place. That could be a church, school, rec center or even a neighbor’s home.

Summers said that interested people should try and get five or more people to get a training session set up.

While Summers is compensated for his time, effort and experience, it is hardly enough to make a living off of.

“I don’t tell you that to prove a point,” he said to those gathered. “I want you to know that, what I’m saying to you, I mean it.”

In closing, Summers told the group his plan if money does start to flow in.

-Text and images and by Bob Stewart.

In case you missed it, we found a few places where people were talking about things happening in Port Richmond: Princess bringing Happiness To Port Richmond and Beyond: Port Richmond native Kennedy McCabe works with […]

On the Morning of 9/11, Robert Herzog was on his way to work. His office building was located on the 96th floor of World Trade Center One (North Tower). That morning, he did things he […]

Philadelphia Police Capt. Dan O’Connor characterizes Port Richmond as a neighborhood in transition. It’s a section of Philadelphia that houses some generations-old families that have never left. Other residents have arrived from quickly gentrifying areas […]