To commemorate Dr. Martin Luther King’s sanitation worker’s protest, union members across Pennsylvania gathered recently near City Hall to participate in Working People’s Day of Action. But while organizers celebrated, U.S. Supreme Court is deliberating on a case that could substantially impact those very unions.

In February, the court heard arguments for Janus v. American Federation of State, Municipal and County Employees, Council 31. The case challenges the constitutionality of obligatory payment of union dues and for public-sector unions across the country, the impact of this decision looms large.

Since the addition of Neil Gorsuch to the bench, the political balance of the court has fallen towards the conservatives, almost guaranteeing a defeat for unions, which have already seen declining membership for the past 50 years, according to the Monthly Labor Review’s estimate of union density. If the decisions goes against them, unions would lose their ability to involuntarily force employees into fair share union membership. Currently, 28 states have right-to-work laws, meaning that even if an employee received a contract negotiated on behalf of a union, that the member is not obligated to pay dues. 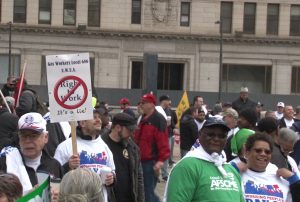 “I think that it is wrong that non-members are enjoying union benefits. They’re freeloaders,” said John Prenis, who attended the MLK Day event. Despite never participating in a union, Prenis said that he admired organized labor. “Collective barging is a fundamental principle of unions. If (non-members) lose their union benefits, they’ll howl,” he said. 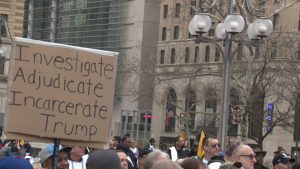 -Words and photos by Robert Cochran