“A lot of kids, they don’t have the opportunity or the means to go out to the different events like the Eastern State Penitentiary or up to Bucks County or somewhere where they have the corn mazes,” said Barksdale (pictured below), who has been serving the Hunting Park community for 12 years. “We wanted to look outside of the box and do something different for the community.” 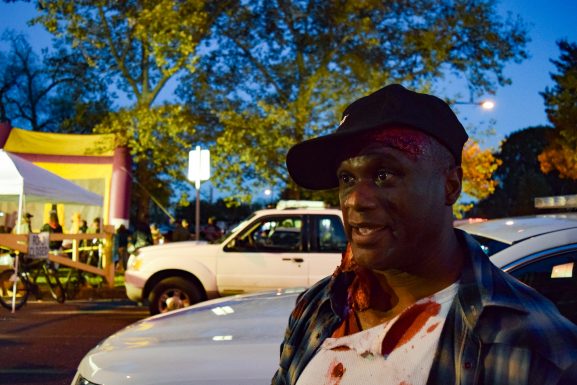 Volunteers and officers from the 25th district were in costume and decorated the trunks of their cars to hand out candy to children. All the activities were family-friendly, and parents and their children from all over North Philadelphia came dressed up to collect candy and celebrate Halloween.

Maritza Perez grew up in Hunting Park and attended the Haunted Hayride event with her husband, Robert Santiago, and their three children, Klaritza, 9, Geiner, 6, and Robert, 4. Perez said the event is safer for her children than going out and trick-or-treating in the neighborhood because of the police presence and number of people in the park.

“It’s nice,” Perez said. “This the first time that we’ve seen it. I’d seen it on Facebook. [It’s important] to keep the community together. Everybody can learn and meet each other, cause a lot of people moved from here.”

Marie Vickert of Port Richmond, who was with her daughter Hanah, 15 and son William, 5, said she was excited to see all the resources from different organizations in the community, like Congreso, the NET and El Concilio.

“It’s his first hayride,” Vickert said. “He’s excited. It’s nice. I got a lot of good information, a lot of resources. I got some for foster kids, all kinds. I just kept grabbing.”

Vickert said she was happy to see the 25th District police force out in the park leading the event for the neighborhood.

“I think it was nice of them to do that for the community because a lot of people here are not great with the police, but it’s a better communication with the community,” she said.

Brent Johnstone and Akeiff Staples (pictured below, right), the founders and executive directors of the nonprofit literacy advocacy organization FathersRead365, were at the Haunted Hayride event distributing books to children. Johnstone and Staples created FathersRead365 in 2017 to promote reading and fatherhood in disadvantaged neighborhoods. 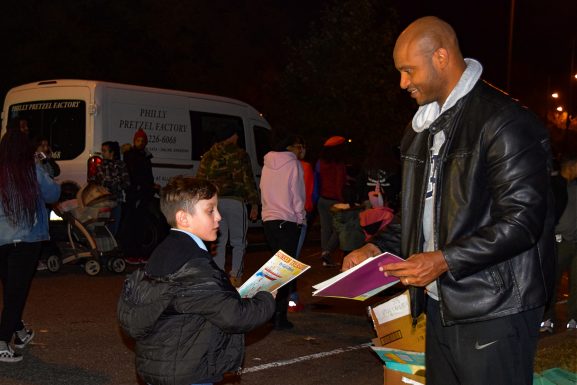 Johnstone, who is from Germantown and Staples, who is from Media, Pa., co-authored two children’s books which focus on self-esteem and healthy eating. They found through their own experiences as parents and social services that many children in Philadelphia do not have the opportunity to read books, let alone to be read to by their parents.

“We take advantage of community festivals like this, schools, any type of organization where there’s children,” Johnstone said. “We go down and give them books along with the message of love and literacy. We also try to give them some literacy resources, especially in heavily-impacted areas of poverty where there’s a big literacy gap.”

FathersRead365 partners with Read by 4th, a coalition in the city for youth literacy, book publisher Tree House Books and Philadelphia READS.

“’We’re parents, we’re fathers, we’ve seen the circumstances that some of these kids are dealt,” Staples said. “We just want to encourage them, empower them, that hey, anything is possible.”

– Text and images by Greta Anderson and Brianna Baker.

Hunting Park: Opposing Perspectives on the Decline of Housing

Laughter and chatter filled the air as 30 people gathered in a tiny space in Hunting Park for an art exhibit entitled “I Am,” a self-reflective show on identity. The space, called Orange Korner Arts, [continue reading…]

https://vimeo.com/37225995] Around two decades ago, the factory on the corner of Fifth Street and Bristol Avenue used to make envelopes. Not exactly the first place you’d expect to go for a college education. Esperanza College [continue reading…]