Murphy’s remained open for business while welcoming attendees of the zoning meeting. A projector screen was set up for presenters to share mock-ups and designs for their proposed zoning approvals.

“If you could all inch a little closer to the screen because we are trying to cohabitate with an active bar,” EFCC Zoning Chair Todd Baylson said at the start of the meeting, raising his voice to speak over the background chatter. “Thanks for your patience it’s an experiment. We have an unconventional venue, but we thought it would be different and interesting and worth trying.”

The location was a first for EFCC zoning meetings. In an effort to support local businesses, Baylson encouraged the nearly 25 attendees to purchase food and drinks throughout the meeting. 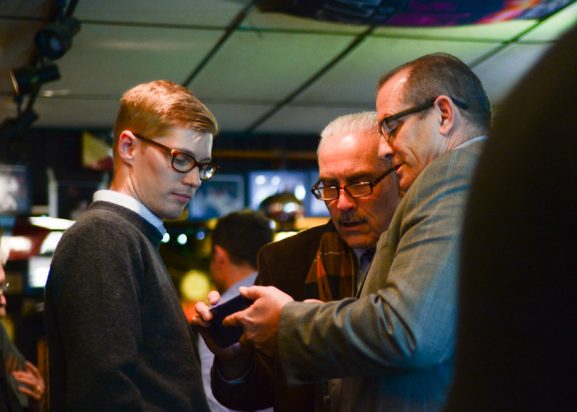 The first presentation of the meeting was by Keith Fallon (pictured above, right), an architect and executive vice president of EwingCole, an architecture, engineering and planning firm headquartered in Philadelphia.

After speaking to neighbors along The Oak Road and receiving input from a past EFCC zoning meeting, Fallon and his co-workers redesigned part of Penn Charter’s plan for a parking lot on its border with The Oak Road. The new plan increased the buffer between the parking lot and The Oak Road to 30-40 feet, added landscaping to the barrier and implemented dark sky compliant lighting. 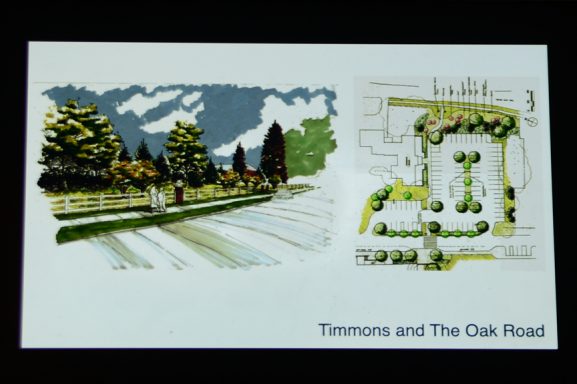 “The other thing is that Timmons stays in place,” Fallon said of the Timmons House, a large estate on The Oak Road dating back to 1901 and  formerly owned by John William Hohenadel. “There was some discussion about possible consideration of that coming down. The plan as it is retains Timmons in place.”

Fallon’s remark about the Timmons House was met with surprise and murmurs from the crowd. 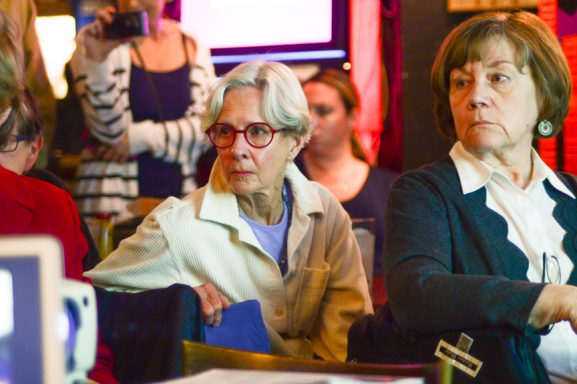 “When you first said that you were going to take down the Timmons House, you mentioned that one of the reasons for that was it was configured in unuseful ways and that it wasn’t in good condition,” local historian Carolyn Sutton (pictured above, left) asked. “Does this mean you are going to maintain Timmons House and adapt it to make it more useful?”

To this, a Penn Charter representative referenced the concern expressed about the proposal to tear down the Timmons House and stated the community response steered the school away from that proposal. The representative also said there are not specific plans to adapt the building, but that the school plans to maintain it for its current use of galas and social gatherings.

Fallon discussed the details of Penn Charter’s proposed Athletic and Wellness Center for which the school is requesting a variance. The request includes pursuing construction of the building while it’s in the process of receiving special institutional zoning (SPIN), rather than waiting for the for the SPIN approval before getting building permits.

The proposal for the 80,000 square-foot Athletic and Wellness Center includes a gymnasium depressed into the ground to minimize the height of the building, in comparison to the buildings already present on the campus.

Another request was for a height variance that would allow for the Athletic and Wellness Center to reach a height of 42 feet, exceeding the residential zone allowance of 38 feet. 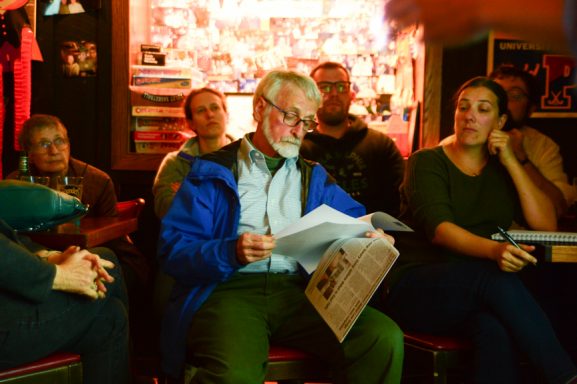 A separate request was for a parking variance. While Penn Charter’s plans are within the SPIN zone parking requirements, they do not satisfy the residential requirements for parking, despite the project adding a net gain of 24 parking spots.

Fallon discussed Penn Charter’s request for his group to implement sustainable landscaping wherever possible around the school’s campus. Of particular concern is the school’s location on the hill and how its construction and landscaping can affect watersheds and resources flowing down. 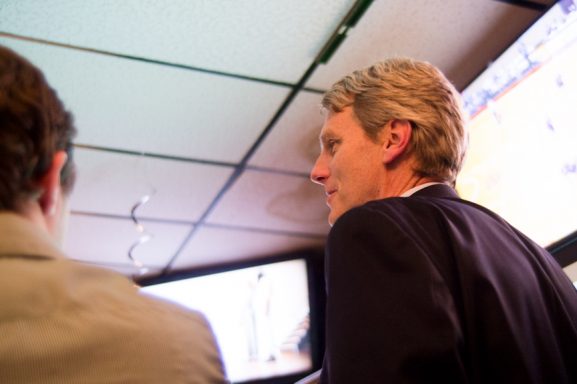 During the latter part of the meeting, John Kelly (pictured above), cousin of Prince Albert of Monaco, requested variances for the childhood home of Grace Kelly, which was refurbished to its original form this spring.

Kelly’s first request outlined converting the top floor of the garage into an apartment for someone hired to maintain the property to live on site. This proposal was met with crowd approval.

Another request was met with more pushback. Kelly requested a variance that would allow for the property to be classified for entertainment purposes, saying the family would like to have occasional large dinner parties for guests and the scale of the events requires entertainment status.

Community members voiced their concerns about what this variance could mean if new owners were to acquire the property. Attendees asked about whether the variance would allow the property to be used as a restaurant, what the qualifications of entertainment are and how the dinner parties would differ from those any resident hosts.

Kelly did not have the specifics to answer these questions but did express the Kelly family has no plans of selling the house anytime in the near future. 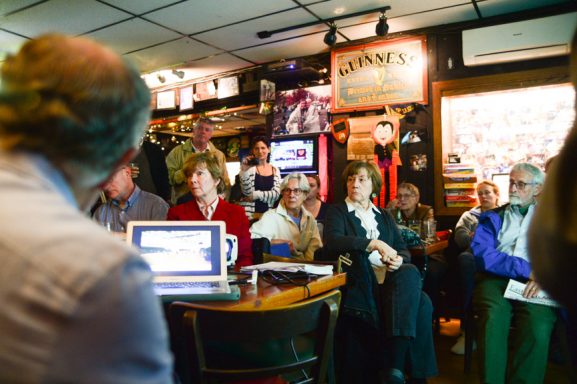 Baylson also mentioned upcoming zoning topics attendees may be interested in. Those include a proposed development for 92 town homes on a parking lot off of Scotts Lane with multiple information sessions planned in the future, as well as being discussed at a future EFCC zoning meeting. Another development mentioned to be discussed was 3313 W. Allegheny Ave. being converted into a multi-family property which requires a variance. The Ridge, Allegheny, Hunting Park Civic Association is the coordinating RCO for that project.

“There were many opposed to that because it would be expensive, and many people for that because they don’t think developers give enough notice,” Baylson said.

– Text and images by Geneva Heffernan.

Residing in the heart of her neighborhood, Kate Clarke is the president of the Juniata Park Civic Association. The community-based organization meets the second Tuesday of each month to discuss and mitigate community issues. How [continue reading…]

U.S. House and Senate Candidates, in addition to local representatives, spoke to community members to rally support before the Pennsylvania primaries on May 17.
[continue reading…]