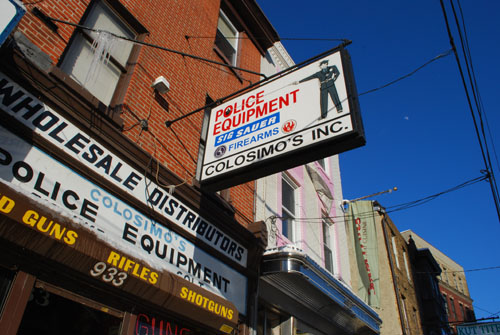 There is no shortage of customers at Colosimo’s Gun Store on the 900 block of Spring Garden Street. A group of young men are buzzed into the store every few minutes, each time bringing in a gust of cold air through the door with a National Rifle Association sticker plastered on it. Eager customers talk excitedly among themselves while they press their noses against the glass cabinets lined with handguns. Outside, two New Yorkers wearing Yankee caps smoke cigarettes while they wait for the shooting range to open next door.

James Colosimo arrives at 2:30 p.m., cautiously walking over the ice-covered pavement outside his store. Colosimo wears a tweed flat cap and dark aviator sunglasses, which make him look less like a controversial gun storeowner and more like a stylish grandfather.

But as Colosimo settles into the leather chair in his office, his stylish façade fades quickly. Colosimo looks tired now; his hat and sunglasses are off, revealing wispy white hair and deep bags under his eyes.

“I love this business and it’s what makes this country what it is,” says Colosimo as he toys with a long cigar in one hand and a gold Zippo lighter in the other.

The month of January has been an exhausting one for Colosimo, who was targeted during a religious organization’s week-long protest. The protestors were part of Heeding God’s Call, a coalition of various faith leaders in the Delaware Valley who are advocating for firearms storeowners like Colosimo to employ more stringent gun control measures. The protestors asked Colosimo to sign a 10-point code of conduct for firearms retailers, which was drafted by Mayors Against Illegal Guns Coalition and recently signed by Wal-Mart.

Colosimo agreed to nine out of the 10 items, but he refused to sign a pledge that would introduce a computer program that traces gun crime back to the retailer. If the customer previously bought a gun involved in a crime, the software would flag the purchase and leave the retailer with a choice of whether to sell the firearm or not.

“They targeted me because I’m the oldest gun dealer in the city,” says Colosimo, taking a long drag of his cigar. “They told me if I don’t sign the 10 commandments, they would continue the protests,” he says with a sigh. “It’s pure blackmail.”

Bryan Miller, the executive director of Ceasefire New Jersey, was one of the advocates involved in the protest. Miller claims that Colosimo is not following the codes at all and seeking only to maximize his profit.

“Colosimo was chosen because he’s a bad actor. He’s being doing this for years,” says Miller.

Colosimo, who has been in business for 57 years, estimates that he has sold over 100,000 guns in Philadelphia. And according to Colosimo, 250 of them have been involved in gun crimes committed around the city. Miller disagrees.

According to Ceasefire New Jersey, in 2003 alone 9 percent of all guns recovered from crimes in Philadelphia were traced back to Colosimo’s store. Miller explained that this is the highest among any gun dealer in all cities across the country.

“When you’re in business for 57 years, you’re gonna have more guns that are stolen or lost,” Colosimo responds. He adds that he has the right to protect the privacy of his customers.

Colosimo swivels his chair to face two framed photographs of his Florida vacation house hanging on the office wall. He wishes to retire in the sunshine state soon.

For the victims of gun crime in Philadelphia, however, Colosimo’s defense is much less convincing.

According to a database compiled by the Philadelphia Inquirer, 331 homicides out of a total of 392 homicides in the city during 2007 were committed using a firearm. The paper also reported that violent crime in the city decreased 3 percent overall in 2008 compared to the previous year, but eight of the 23 police districts still saw an increase in violent crimes.

For Dorothy Johnson-Speight, gun crime is more than just a newspaper statistic. Her 24-year-old son Khaaliq Jabbar Johnson was shot seven times in 2001 after an argument with a neighbor over a parking space. Khaaliq Johnson was a University of Maryland Eastern Shore graduate, who had been accepted into a master’s program. Johnson-Speight believes that her son would be alive today if the killer did not have easy access to a gun.

“Guns are the weapons of choice for murder,” says Johnson-Speight. “The man who shot my son had a criminal record, so his girlfriend had bought the gun for him.”

After the devastating loss of her son, Johnson-Speight established Mothers in Charge (MIC), a community advocacy and support organization that operates out of an office building on Allegheny Avenue.

In the corner of her office, Johnson-Speight sits on a flower-patterned couch and opens MIC’s new book, “Faces of Courage,” published by Hardwood Books. As Johnson-Speight flips through the pages, she lists off the names of the sons and daughters murdered in Philadelphia.

“Violence changes lives forever,” she says. “The experience leaves you broken and everyone needs to be working for change.”

Like Miller, Johnson-Speight doubts that Colosimo is operating his business as he should. She casts her dark eyes down to the photos of the young faces featured in the book. Graduation photos and candid photos taken by family members accompany the victims’ life stories.

“There are young men and women dying every day and nothing is happening.”