Imagine driving through an industrial complex. Instantly, your mind flashes to smoking pipelines that are beating our ozone layer into a bloody pulp. You imagine lonely, littered, and seemingly abandoned streets. You see lines of over-sized factories surrounded in menacing barbed wire fences and uninviting empty lots that you know could be used for so much more. An area like this could ruin just about any community. Well, maybe not. In Port Richmond, heads of industry have banded together to show they care about their neighborhood’s economy, environment and all-around upkeep.

Although industry along the Delaware River in Port Richmond is originally what gave it a breath of life, today residents are not so happy. “It was much against the community that they developed this as an industrial area,” says Regina Gorzkowska, founder and president of Pro Arte Associates. A well-known community activist, she speaks for many when she says that many of these industries could be located anywhere else and therefore should move from this “prime area near the water.” It becomes easy to assume that the industry in Port Richmond takes this area for granted.

On the contrary, Port Richmond’s industrial base has been proving its dedication to the neighborhood for several years now. In 1996 Pew Charitable Trusts gave funding to the Philadelphia Industrial Development Corp. to start a program that would both create and maintain jobs in Philadelphia neighborhoods. The result was the Urban Industry Initiative. This targeted the neighborhoods of the lower Northeast, including Frankford, Kensington  Port Richmond. “We took a relationship-based approach, rather than focusing on programs. Basically, we set out to meet firms, get to know them, find out what they need, then respond to these needs, rather than design programs and implement them top down. Networking was a part of everything we did,” says Karen Lockhart-Fegely, an active member of the organization from its start until 2004.

Port Richmond in particular benefited heavily from this approach. “It was through UII initiatives that the businesses in the Richmond Corridor Association and Port Richmond Industrial Development Enterprise area got to know each other,” Lockhart- Fegely adds of the initiative’s importance to the Port Richmond area.

The Port Richmond Industrial Development Enterprise (PRIDE) sits in a rectangle that is bordered by Amber Street on the west, Allegheny Avenue at its southern end, Tulip Street to the east and Venango Street up north. The Richmond Corridor Association (RCA) is made up of over 70 businesses that sit closer to the river. RCA businesses employ over 2,000 people.

“PRIDE and RCA began talking about the need to improve their areas. At the time, both groups had companies that were trying to expand, and were unsure if they should move to the suburbs or commit to their current Port Richmond locations,” says Lockhart Fegely. “[The initiative’s leaders] realized they needed to keep these loosely connected groups in the area and helped them organize, providing early funding and management.” 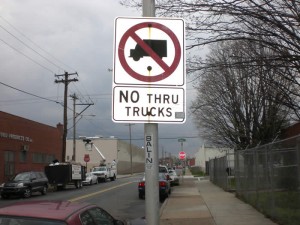 Although each group speaks for its own area, their goals are similar and not limited to business but rather at the community. One major goal of the groups is an alternate truck route, so that they do not clutter up the non-industrial neighborhood streets. According to the RCA’s Plan document, “Trucking Dependent businesses need a place for trucks and loaded trailers to ‘standby.’ Truckers often arrive at their destinations in the early morning hours after driving most of the night. Presently they must line up along busy neighborhood streets, blocking traffic.” The plan calls for a Truck Staging Center, which would be constructed on the intersections of Ontario and Collins Streets.

Both PRIDE and RCA are very adamant about signage throughout Port Richmond. PRIDE’s area is easily recognizable by the uniform blue signs that adorn every occupied business in their rectangle. Even quirky businesses like a comic book shop adhere to the uniform signage. The RCA’s plan calls for even further signage throughout the neighborhood, including street signs, arrival markers, destination directional signs, business destination signs and even adding Port Richmond’s name to the Aramingo Avenue I-95 exit. “A good signage system imparts a sense of confidence to the visitor and creates a unified visual statement that is easily recognizable and imparts a sense of community,” states the official plan.

PRIDE is responsible for fixing up over 4,000 feet of sidewalk and 3,500 feet of fencing in the Port Richmond streets. This was not just a one-time offer because the group also helps maintain these sidewalks as well. “Through its business improvement district, PRIDE businesses support a sidewalk cleaning service a few days a week,” Lockhart- Fegely says.

Another area these groups focus their attention on is lighting throughout the neighborhood of Port Richmond. The RCA’s plan insists: “A well planned lighting system will provide benefits on several levels. Most noted are safety, security, economy, and aesthetic image.” As of 2007, PRIDE has spent several hundred thousand dollars on lighting for the neighborhood. This includes pedestrian lighting, as well as illuminating some building facades, business identification signage, entrances/loading areas and railroad bridges.

PRIDE spends a great deal of money and effort in promoting security in the community. One extreme measure that they’ve taken is spending $100,000 to install security cameras throughout the area. This boosts security and keeps businesses in Port Richmond due to the lower rate of vandalism. “Businesses leaving” was listed as one of the area’s trends that were getting worse in the RCA plan. In this way, security cameras benefit both the industry and the community it resides in.

Ultimately, the organizations have tried to help both industry and the community as well. “Investment in public spaces and the creation of opportunities for there to be eyes and ears on the street will ultimately create a healthier and more stable neighborhood,” says Harris Stienberg, the executive director of PennPraxis. This organization is  another group that wishes to change the landscape along the Delaware River.