It’s four o’clock on Friday and the click-clack of freshly shined shoes and black leather pumps pound the pavement in four-four time.

As trains roll in and out of Suburban Station at 15th and John F. Kennedy streets, commuters bustle by in hopes of catching an early train. Their focus is tight on the overhead digital boards reading off their train’s arrival and departure. 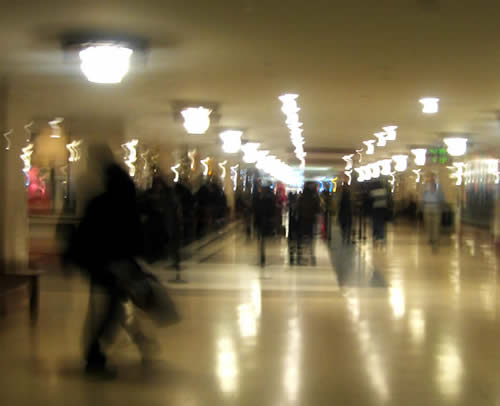 Their disappointment is as apparent as it is fleeting as it is quickly wavered by a thumping bass and rat-a-tat-tat of a snare drum.

“Every day I look forward to the unknown music of the concourse,” says Mary Louise, 46, a Market East train rider. “It’s a real treat, and always a surprise.” Louise, a Comcast Center employee, says she enjoys the walking from the Comcast Center through Suburban Station to the Market East rail line on her daily commute home.

Not all riders are as enthusiastic as Louise, though. Ross Gelches, 27, a percussionist, employee at the Comcast Center and R5 Paoli/Thorndale rider is not as captivated by the boundless concert of the concourse.

“As a drummer, I appreciate what they are doing,” says Gelches. “However, as a commuter, a loud solo drum beat is one of the last things I want to hear in the morning on my way to work.”

While reactions are staggered among Philadelphia train riders, it is expected to hear musicians of nearly every genre serenading a sometimes unaffected crowd. Regular riders expect a culmination of calypso percussion and operatic tenors fused with the sound of a change dropping and incessant train departures.

“A cappella blind singers belting out gospel tunes with reverence,” Louise details. “A 10-year-old violinist that can bring tears to your eyes, a blues singer peddling his CDs, a Beatles cover band.”

What is not necessarily expected though, is that some of the musicians who use Suburban Station as their stage, also use it as their pulpit to promote a healing lifestyle through African percussion, break dancing and hip-hop culture.

What is even more unexpected is to see briefcases resting on the floor as grey-suited pantlegs gyrate, feet tap and businessmen and women stop to buy into the teachings of Levi of Urban Shamans music group.

On Friday at four ‘o’clock, while Philadelphia commuters rush to the early train, Levi, also known as “The Traveler” of Urban Shamans, percussionist David Buckery and members of 360 Underground Legion dance group are just setting up stage near Track 1 and 2 in Suburban Station.

“Smiles on faces and elevating human races,” says Levi confidently from behind his high hat cymbal. 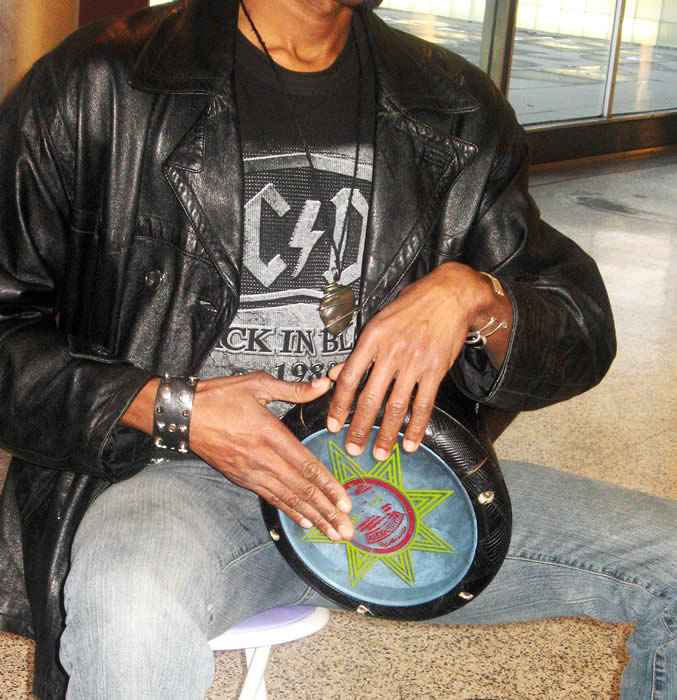 Urban Shamans has been creating music in Philadelphia promoting Levi’s philosophy since 2003 and has performed at venues from the concourse to Philadelphia’s World Live Café.

“Basically what we’re here to do is to bring music and beauty to uplift Philadelphia and the surrounding areas. We teach the beauty of not just the art form but the lifestyle of love. That’s basically what we’re about, uplifting people through art and sound.”

Levi won’t do it alone. He is joined by percussionist David Buckery and the 360 Underground Legion dance group featuring dancers Brian Hannibal, Hanif, Macca and Rees, also known as “The Animal,” whose hip-hop dancing and high-energy breaking literally stop train riders in their tracks.

“We put smiles on people’s faces that we don’t know from anything”, says Hannibal. “Never seen them a day before in our life.”

It’s hard to imagine in these trying economic times that simple percussion beats and dancing could lift the spirits of Philadelphia commuters. Levi claims, in these times, the group’s message and function is more important than ever.

“It makes people feel a lot better with things being the way they are.” Levi continues, “I’ve seen a lot of people really open up. People that you would never think would stop and listen to music stop and put their briefcase down to get into a long watch.”

Louise adds, “Although it’s not my type of music, I found it very enjoyable and happy.”

With simple pleasures harder to come by recently, the group maintains that the vibes of the people are their driving force.

“People want the art, they want the music, but they can’t always throw [money],” says Levi. “They say “man I love what you are doing. I wish I had some money to throw.” But we say, just that in itself is what we needed to hear.”

Without a permanent venue or economic stability, the group stresses that its message is only as strong as the ability to pick up and go, calling themselves traveling musicians with a peaceful mission to heal and uplift people. Though, the choice of Suburban Station as a pulpit for their teachings has some train riders a bit confused.

“Students do it to practice playing in public,” Gelches says. “Others do it for money and to show off talent.”

Louise adds, “It’s very well traveled with people and it’s warmer underground with no weather disruption, so they can play every day.”

While Gelches and Louise’s claims may hold accuracy for some musicians’ motives, Buckery, nudges his tambourine with his boot and rises from his tripod stoop to explain:

“It’s the love for sharing the art,” he says. “Making people smile and laugh. It’s about taking it to higher levels. On the streets we do it like it’s in the Spectrum.” 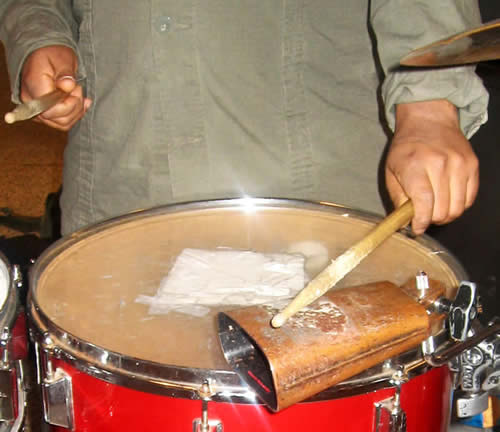 Levi continues, “it’s not just a person playing an instrument. Not to say that other people are playing their instrument just for money, but we’re playing our music to teach and heal.”

“This is what we practice all day everyday,” Buckery said as he settled back into his stool fixing his rubber-soul boot on the dorsal side of his red tambourine.

Levi sits at his makeshift drumset and starts wailing on the cowbell before lunging into a solo on the snare. The ruckus causes people to rewind their hurried steps and the 360 dancers turn the unbuffed floor of Suburban Station into their stage of unhinged power moves. Taking their proverbial “quick glance” at the digital overhead board, it seems that five minutes late never sounded so sweet.