“Assalamu alaikum,” Jahed Chowdheury welcomes a pair of women who enter his shop with the traditional Muslim greeting meaning, “Peace be with you.”

The two women are Muslim, like Chowdheury. They are black and dressed traditionally for Muslim women, in hijab. They have headscarves covering their heads, faces exposed, and they are wearing modest, loose-fitting clothes.

Chowdheury, a Bangladesh native who has lived in West Philadelphia for 10 years, owns the Dollar Discount at 1246 N. Broad Street. He bought the store three months ago and operates it with the help of his wife and sister-in-law.

But the Dollar Discount is not just a dollar store. It, along with numerous other dollar stores found along North Broad, is more of simply another store. Clothing from sweatshirts to lingerie line the rack next to more typical dollar store items, such as gift bags and measuring spoons. A large collection of sheet sets is on sale, as well as computer desks, chairs, mirrors and rugs.

After being welcomed and hearing the distinctive Bangladeshi music, one can climb a few stairs and shop for religious and cultural items. Dollar Discount also has a large collection of Islamic books, decorations, paintings, music and oils (left).

“Lots of Muslims shop here,” says Chowdheury. “So we keep for sale some of these things that are more for them. Plus, it is my culture.” 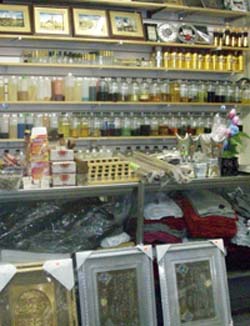 There is a large Muslim community along North Broad. There are many women dressed in hijab and men wearing kufis and long white robes. There is the large Muhammad’s Mosque of Islam at 2508 N. Broad St. But, Chowdheury notes, his customer base is diverse.

Two more women enter Dollar Discount. They are not dressed in hijab. Tameka Rice, 33, of North Philadelphia, purchases two rolls of Scott toilet paper, a pack of sponges and five pairs of multi-colored, stripped socks. She spends under $9.

“Shopping at Dollar Discount, or any dollar store, really, is good,” Rice says. “I can get a lot of stuff for myself and my daughter without spending too much. You know, it’s hard to save money. but I [have to] try.”

Dollar Discount seems to represent shopping on North Broad in general – one-stop and low-priced. From Girard to Erie avenues, there are more than seven dollar or discount stores, including Valu-Plus at Venango and Broad and AZ Budget at Glenwood and Broad.

Chowdheury has noticed the shift in the economy. He has owned another dollar store in West Philly for longer and says that lately business at both locations has slowed. “Business is so-so. It has not been too good. We have lots of things to choose from [and] good prices. But business has gone down.” 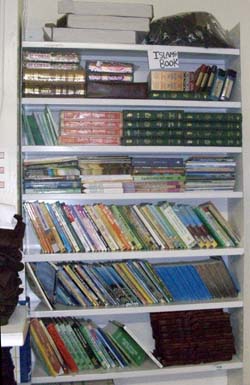 Down the block from Dollar Discount, another entrepreneur sets up shop. On the northeast corner of Broad and Girard, Ray’s Peanuts is a small cart filled with candy, snacks and yes, peanuts. It has been a community fixture since 1995 (above).

Ray hangs out next to his stand in a lounge chair, and he enjoys his job, even when it gets cold outside. Friends keep him company, and they listen to music when there are no customers. It doesn’t take long before someone orders a bag of peanuts.

“What would I do without my protein?” says North Philly resident Jay Tethers. “Best peanuts around. I can get my sugar rush on, too,” he says as he eyes the taffy.

Even with the recession, Ray says business hasn’t slowed. He inherited the stand from his father in 2005, and he plans to keep the stand in the family for as long as possible. “Business is always good. What would people do without Ray’s peanuts?”

While most people would probably survive without Ray’s peanut stand, Ray might have a more difficult time. It is his only source of income, although for now he says it’s enough. 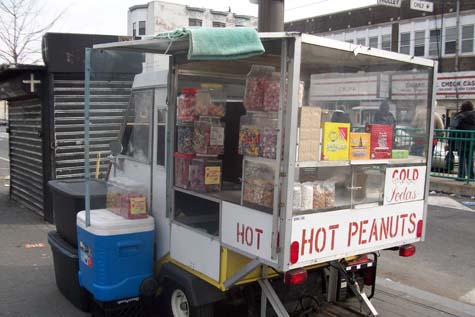 These locally owned shops and stands dominate shopping along North Broad. They give flavor, options and opportunity to a community of people battling the economy. While there are sprinklings of national chains stores, such as Dunkin’ Donuts and Rite Aid, small stores seem to be the busiest. Customers come out of Valu-Plus with shopping bangs much more frequently than from Foot Locker or the women’s clothing store across the street, Ashley Stewart.

Many smaller discount stores prop their doors open to invite in customers, like Neighborhood Discount. Smells of incense reach the near sidewalk. Scores of people walk by Dollar Discount (below) without entering, but they don’t seem to be shopping anywhere else.

“We will just keep trying,” Chowdheury says. “We hope business picks up. We want people to buy from us. It helps us, and we help them.” 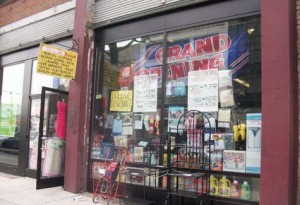