On an unseasonably warm March afternoon, a group of four fishermen lines the pier at Pulaski Park. They bait their hooks with shrimp and cast their lines into the Delaware River. Some days they catch catfish. Other days they don’t. But they visit the park frequently, especially in the warmer months, to fish and to relax. “I’ve seen more than 50 people here at once during the summertime,” says Victor Delgado, a Port Richmond resident in his mid-twenties. “People come here to have picnics and have a good time. They fish, eat, throw their trash out and we all go home,” he describes, motioning toward a large burn barrel on the pier. “It’s a great place—Pulaski Park. I’ve been coming here for six years.”

Named after a Polish military commander and Revolutionary war hero, this half-acre sliver of greenery along the Delaware is squeezed between two industrial sites and is located just off the bustling intersection of Richmond Street and Allegheny Avenue in Port Richmond. Tractor trailers plug along Allegheny Avenue before stopping to unload in the massive parking lot to the left of Pulaski Park on their way to the towering I-95 overpass, which obstructs views of the park and the waterfront. “This impoundment lot could be anywhere. It does not need to take up a prime spot along the river,” explains Regina Gorzkowska, president and founder of Pro Arte Associates, a non-profit conservation group geared toward revitalizing the park in conjunction with other civic organizations, including the Friends of Pulaski Park, the Pennsylvania Horticultural Society and the Polish Business Association. “I-95 is blocking the view—that’s why the park was forgotten,” Gorzkowska adds. “We want to sink this section of the highway so there is a direct view of the park at all times.”

Regina Gorzkowska talks about her involvement with the revitalization of Pulaski Park, sitting beside a watercolor of the park done by Stanley Mitchell.

Regina’s wishes to sink the highway, swallow the parking lots and revitalize Pulaski Park and the whole of the Port Richmond waterfront are not far-fetched. One of only two green spaces along the central Delaware riverfront, Pulaski Park’s revitalization would serve as a building block for the implementation of a broader, civic vision for the riverfront, a vision being led by Dr. Harris Steinberg, executive director of PennPraxis, the clinical arm of the School of Design at the University of Pennsylvania.

The process by which PennPraxis developed its vision for the central Delaware, a process that began three years ago, incorporated 15 civic associations, including Friends of Pulaski Park and Port Richmond on Patrol and Civic Association. The plan encompasses 10 objectives that if implemented will drastically reform the riverfront from Pulaski Park all the way south to Oregon Avenue. Steinberg echoes Gorzkowska and elaborates upon the potential impact of the civic vision on the Port Richmond community. “There’s a lot of land in Port Richmond that’s currently controlled by a couple of landowners. The vision recommends that the street grids that currently stop at Richmond Avenue would cross over onto those lands to connect the city with sidewalks and streets and development opportunities,” Steinberg explains.

“Anytime you open up streets and create opportunities for eyes and ears to be out on the street,” he continues, “then inherently you build a safer community than one with dead ends and large tracts of land that are not visible and accessible.” Currently, a mile-long wall along Richmond Street blocks the community from accessing the river. Extending the street grid and transforming industrial zones into recreational spaces would in time make for a much safer, healthier and more public Port Richmond.

Not surprisingly, the widely supported PennPraxis vision has been espoused by Mayor Nutter. 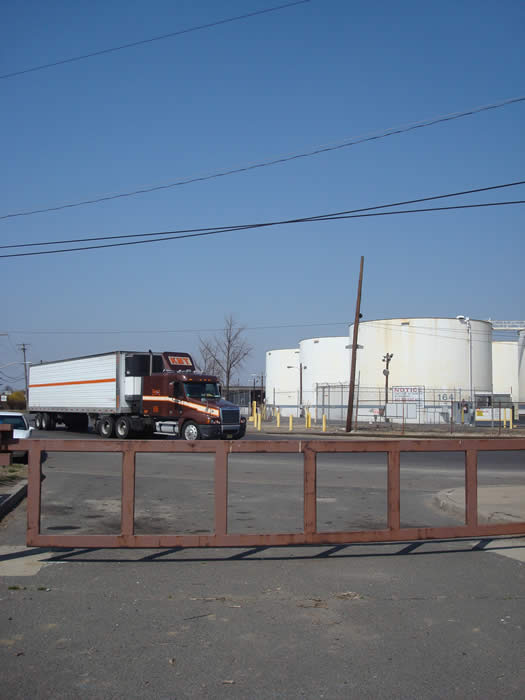 In January, he implemented the first step of the 10 objective plan by reforming the Penn’s Landing Corporation and establishing the Delaware River Waterfront Corp. as an open and transparent waterfront manager. The action also expanded the corporation’s domain to encompass the seven miles of riverfront outlined in the vision. In February, the topic of improving the riverfront was on Mayor Nutter’s agenda at the 43rd National Session of the Mayors’ Institute on City Design, where he voiced the city’s interest in repairing and reclaiming its waterfronts for public use. Suggestions to cap sections of I-95 in order to create a more aesthetically pleasing waterfront landscape, mirroring those outlined in the PennPraxis plan, were made by urban

In February, the topic of improving the riverfront was on Mayor Nutter’s agenda at the 43rd National Session of the Mayors’ Institute on City Design, where he voiced the city’s interest in repairing and reclaiming its waterfronts for public use. Suggestions to cap sections of I-95 in order to create a more aesthetically pleasing waterfront landscape, mirroring those outlined in the PennPraxis plan, were made by urban designers in attendance. Port Richmond community members and activists, like Gorzkowska, are satisfied with Nutter’s efforts. “Mayor Nutter is for the park. He follows PennPraxis’ plans,” Gorzkowska says confidently. “I just can’t express my hopes that this city will follow through with this plan. They have my complete support.”

The PennPraxis plan has brought increasing local media attention to the once-forgotten Pulaski Park, whom advocates such as Regina

Gorzkowska have spent years publicizing in the Port Richmond community. “We did a film and a book on Pulaski,” Gorzkowska notes. “Stanley Mitchell painted this beautiful watercolor. We organize fishing tournaments and community clean-up events. We do everything we can to promote the park. But PennPraxis has definitely given us the boost we needed.”

A beloved historical symbol for the Port Richmond Polish community, as well as a treasured site for repose and recreation for Port Richmond fishermen and families, Pulaski Park is well on its way to revitalization.