Beer poured from the tap as men gathered in small groups to converse, toss back drinks and listen to the 1980s dance music that blared in the background. It was a dimly lit spot, but all the commotion made the place vibrant and live. The bunch that stood out the most was the group of muscularly large, chatty men who communed at one side of the bar, most of them sporting blue or yellow jerseys. As I approached the group, I realized these weren’t just any big men, they were the Gryphons.

The Philadelphia Gryphons Rugby Football Club has established itself as the first gay-friendly men’s rugby club in the Philadelphia area. In preparation for their first practice the team was scouring through a number of bars and clubs to find new teammates. First stop on their recruitment hunt was the Westbury bar, located in the heart of the thriving gay community in Center City’s Washington Square West neighborhood. As men sauntered in and out of the friendly bar, some made their way over to the players interested in learning more about the team. Although big in size, the players’ wide smiles made them approachable; they welcomed questions and conversation as they explained who they were and what they were looking for in new teammates.

“Sorry, we only accept men, but I am sure you can try out for the women’s rugby team,” Jeremiah Walters explained to me after I expressed an interest in trying out for the Gryphons.

Twenty-two-year-old Walters, an entrepreneurship major at Drexel University, has been a part of the Gryphons rugby team for a year, a team that has been around since 2003. He and his teammates act like brothers rather than teammates, making jokes, poking fun at each other, laughing and just having a good time.

Dano, who declined to reveal his last name, is another member of the team. He is a 39-year-old cook supervisor at the Federal Detention Center in Philadelphia. When he is not working at his full-time job, he practices with the team. Although he comes from a family of eight, Dano says he feels a sense of belonging with the Grypons.

“You really feel a sense of camaraderie on the team, an instant family feel,” Dano said.

This family of hard-hitting, fast-running athletes takes men of all shapes and sizes; men who don’t even have to have any knowledge of rugby, a 15-player sport that is a mix between soccer and football. The Gryphons’ goal from the beginning has been to provide men underrepresented in the sport of rugby, mainly, but not limited to homosexuals and African Americans, the chance to play. The Gryphons have displayed hard work and determination during their years of existence and their goals have paid off.

Team President Michael “Moose” McAlister, a five-year veteran of the team, has helped to lead them to the Bingham Cup, a tournament comprised of teams from all around the world who are a part of the International Gay Rugby Association and Board. These teams get to travel around the United States and to different countries as they compete with other teams. The Gryphons, thanks to their hard work, were able to travel last June to Dublin, Ireland, to participate in the tournament. 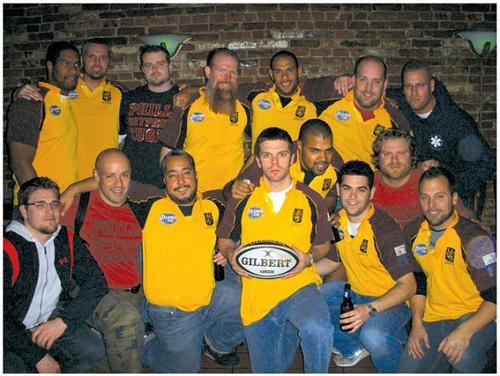 “I am really proud of the guys and their accomplishments. We have had a great year and we hope that we can find some more great guys to join the team to be a part of our success,” McAlister said.

As the team mellowed out and gulped their beers, it was plain to see the true camaraderie in the group. Team captain Damien Tracy put it best when he labeled the team as having a work hard and play hard mentality.

“I trust the people I play with because I know what they’re capable of. They do what they need to do on the team and then we can hang out after,” Tracy said.

Tracy believes that the best part about the Gryphons has to be the team atmosphere.

“The players really care about each other, whether we win or lose, we support each other and that’s what the team is about,” he added.

With the rugby season coming up, the Gryphons, still on the hunt for new players. If you see them around, offer your support and your skills because they welcome both.