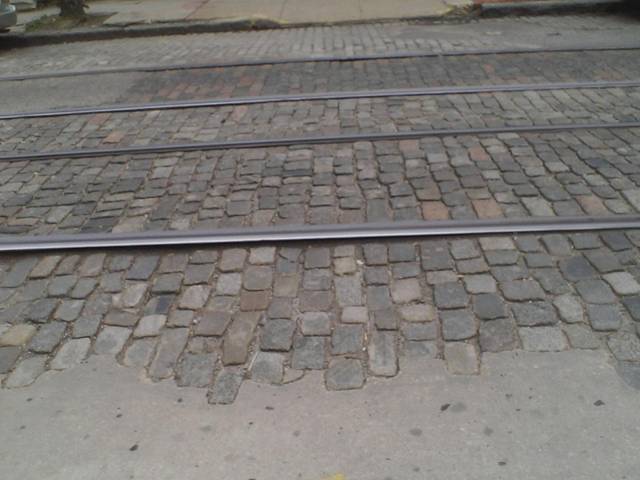 If you’ve ever wondered why your car trembled like it was scared while driving down Germantown Avenue, there’s one answer: The combination of the trolley track and cobblestones.

So you know what a trolley track is, but what are cobblestones?

Cobblestones are river rocks that were commonly used to pave streets in more ancient times. They are made from highly durable stones, usually basalt or granite. Eventually, because there were newer ways of paving and because the newer ways were cheaper, easier to install, and meant for a smoother ride, cobblestones lost their popularity. Many of the existing cobblestone roads were paved over with layers of concrete and asphalt.

But on Germantown Avenue, the streets are still lined with visible cobblestones.

“These cobblestones were put in, in the late 19th century,” said Gene Stackhouse, a Germantown Historical Society volunteer who works as an historian and a genealogist. “But starting in the 1700s, there were cobblestones all over Philadelphia. The street I grew up on in Kensington had cobblestones on the street until after World War II.”

The makings of Germantown’s cobblestones were unique. So unique that no one wanted to figure out a way to remove them.

“These cobblestones were laid by Italian immigrants who specialized in masonry work and no one ever wanted to take them up,” Stackhouse explained. “In the ’70s they were [instead] fixed, where as most streets in Philadelphia [turned to] asphalt.”

But not everyone has given up on trying to get the cobblestones removed.

“Picturesque” and “historic” were terms Stackhouse used to explain why residents wanted to keep the cobblestones, but he does not feel the same way.

“I think they’re a pain,” Stackhouse said. “I don’t drive on [Germantown] Avenue [because of them].”

Though Stackhouse thinks they’re a bother, Germantown is one of few neighorhoods to still have cobblestone roads. The battle over whether to put forth the time and money to remove them. That decision could last another century.

Read about the safety of driving on cobblestones. And then, learn why cobblestones are harming the community of Germantown as a $17 million construction project takes its toll on local business trends