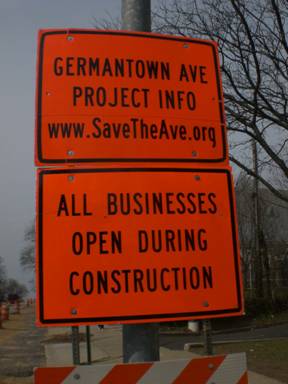 Bumpy, dangerous to drive on and just a pain in the neck—this is how Germantown residents describe the more than 100-year-old cobblestones that line historic Germantown Avenue in the Northwest Philadelphia neighborhood.

The jagged cobblestones of Germantown Avenue have been a unique cultural quality of the area since they replaced dirt roads of the Quaker-founded community during the late 19th century.

More than a century later, removing these cobblestones for much-needed roadwork has created a difficult economic situation for the businesses and residents who work and live along the historic avenue, where $17 million dollars worth of roadway construction is currently taking place.

When the cobblestones were lifted during Phase II of the project, between Roumfort Road and Cresheim Valley Drive, crew members found corroded lead pipes, cracked gas lines held intact only by the pressure of dirt and layers of cobblestones that have remained untouched for a more than a century.

“It’s all original infrastructures dating from the 1800s,” said Gil Owens, a utilities specialist for the PennDot contractor of the project, C. Abbonizo & Sons Inc., of Sewell, N.J. “Dirt is holding these [gas] lines together. When you take it away, the pipes leak consistently, and when you move to excavate, any sudden moment—boom.”

Residents are frustrated by project delays and the construction’s inevitable toll on the area’s quality of life and local business trends. But with a decade’s worth of work to clean up, PennDot contractors are doing all they can for a speedy return to the venue’s pre-construction glory, while still maintaining safety underground.

“I’m helping you,” Owens said about resident concerns. “This is construction. You have schedules, but you run into so many problems. There’s so much stuff underground no one knew about it.”

The Trolley Car Diner in the 7600 block of Germantown Avenue is one of many area businesses struggling to keep up business as Phase II construction carries on. Originally promised for completion within 49 days, the project has been rescheduled from a March 10 finish to May 1.

Driving north on the avenue toward Mount Airy, drivers are alerted to the upcoming construction via PennDot-commissioned and local signs. At Roumfort Road, drivers not entering the Trolley Car Diner or neighboring New Covenant Church of Philadelphia are directed away from construction by flag bearers. The entire block between the diner and Cresheim Valley Drive is shut down to car and pedestrian traffic.

Since construction began in late January, the decade-old diner has let go seven employees and lost $30,000 monthly in profits, said co-owner Robert Mazaleski. The family-friendly diner was once a popular spot for locals, but now Mazaleski is surprised to see a full house for even Sunday morning brunch. Business just isn’t what it used to be, thanks to a giant hole immediately in front of the restaurant, unsightly construction and difficult access from the north. “You used to come here on a Sunday and it was overflowing. Now you can drive in and find a spot,” said Mazaelski, whose restaurant seats up to 150 diners. “No day is what it used to be.”

Since construction began, neighboring Cresheim Cottage Cafe has suffered from monthly losses of 26 percent, and work in front of the restaurant hasn’t even begun yet. Beginning May 1, crews are scheduled to move south on the avenue to begin work in front of her business, just as the restaurant begins seating outdoors. “The construction was supposed to begin in front of the Cottage in March. Now it’s slated to begin in May and run through outdoor eating season,” said Donna Robb, co-owner of the Cresheim Cottage Café for four years with her sister, Lizza Robb. She worries that noise, dust and general inconvenience from the construction will kill her most profitable season.

Simply getting food delivered to the restaurant has been difficult, and Robb has resorted to taking multiple shopping trips herself. “They [food delivery services] put us at the bottom of the list now, so we don’t get any food until the end of the day. An 18-wheeler can’t come in here and can hardly back up because of the construction.”

A project that was supposed to take 49 days continues to impact business affected by Phase II of the project. “How can you go 49 days, and only get one day’s worth of work accomplished?” said Mazaelski, looking around the quarter-full diner during lunch hour on a Wednesday. “This is nothing. We’re the busiest business in the area. Now, nights are so-so. Weekends, so-so. We’re supposed to have a wait here.” 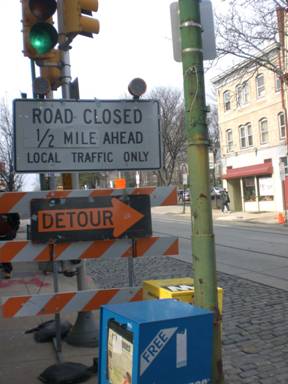 While open communication exists between parties involved, Mazaelski remains skeptical about the project’s progress. “How long are they gonna take?” Mazaelski said. “Will 12 months turn to three to four years? At this rate, that’s how it’s going to be.”

When the project was first introduced, concerned business owners lobbied for completion of the project in 2008 to ensure a healthy holiday shopping season, explained Farrah Jimenz, executive director of Mount Airy USA, a nonprofit group that supports businesses and community projects in the area. With the project already pushed to Thanksgiving, Jimenz worries whether already hurting businesses will be able to reorganize themselves for recovery in time for the holidays.

“The best we can do is to encourage our neighbors to visit these businesses. Even if they don’t want to: eat there, go there, shop there,” she said. “Everyone has to be in this, or then we all cry when the businesses shut down.”

Some are crying—and the state government has responded with $110,000 in allocated funds, said Laura Siena, executive director of West Mount Airy Neighbors. Led by Cresheim Cottage Cafe co-owner Lizza Robb, local business owners formed the Coalition to Save Germantown Avenue and accompanying Web site, www.savetheave.org, to help promote and provide construction updates for Germantown businesses affected by the business. The $110,000 allocated to the coalition by the state will be used for an online and mail promotional campaign to inform residents how they can still visit parts of the Avenue undergoing construction, Sienna said.

“It’s just hard the way they have to do the construction and basically shut down sections at the time. If they kept half the street open, it’d be a three-year project. Who wants to do that? But if it’s your block, it’s a horrible, horrible time,” Siena said.

Back at the Trolley Car Diner, Germantown residents Amy Mann, Jean Erb and Joyce Willis are grabbing lunch together. Just the night before, Erb visited the Melting Pot at 8229 Germantown Ave. with friends from out of town, who she encouraged to dine in Germantown to support local business. “They wanted to meet in Center City, but I said, ‘No, no, come here!’”

The one-year residents moved to the area partly for its convenient public transportation. Now that construction has created detour bus routes and difficult access to their local business, the women are frustrated that PennDot didn’t foresee these issues before.

Now, just getting to their local CVS is inconvenient. “It’s just a pain in the neck,” Mann said.

While regular patrons have remained loyal, it’s the occasional customers which business owners need to attract to keep from staying in the red. “Human nature is I just don’t want to deal. It is for the people who feel it is optional to go to these businesses; that is what’s hurting our businesses,” Jimenz said.

Siena is concerned that businesses farther south from Phase II of the project will suffer more, simply because they aren’t destination businesses. “They’re more the type of business if you happen to be walking down the avenue and you need a gift, you pop in and you grab something,” she said.

The Wyck Home in the 6200 block of Germantown Avenue will feel the effects of the construction in a different, potentially less historically sensitive way. Operated by Historic Germantown Preserved, representatives of the historic home consortium hope to negotiate with PennDot about particular plans for construction, including brick sidewalk installation and tree planting. Bricks for the sidewalk must be laid in a particular fashion, and only certain types of trees chosen to plant in order to maintain historical accuracy of the 17th century home and landscape.

Laura Keim, curator of the Wyck Home, is working to ensure that the historical features of the property are retained during Phase III of construction between Gowen Avenue and Roumfort Road, tentatively scheduled to begin late summer or early fall.

“What we’d like to find out what aspects of some of our goals, which include doing things in a historically sensitive way, could be met by PennDot. Or if there are things we’d like them not to do, things they were planning to do, but we say that it was creating a historical intrusion on the landscape,” Keim said.

Owens, the utilities specialist for the contactor of the avenue project, said that PennDot hired a cobblestone “counter” to count the cobblestones as they are removed from the Avenue. All original cobblestones will be cleaned and placed back into the roadway at each phase of the roadwork.

“We actually save them, we send them in and they clean them up for an authentic look,” Owens said. “They come back, and we have guys place them in a fan patterning.” 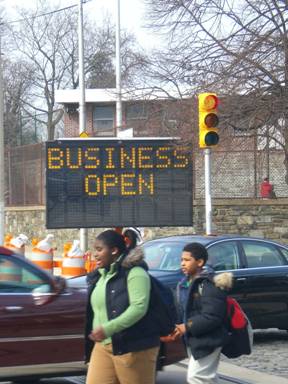 With nearly eight months remaining of construction, the avenue itself remains to be saved—but the businesses along the commercial corridor between Creishem Valley Drive and Washington Lane are doing everything they can to stay afloat when construction hits their block.

PennDot plans to keep sidewalks open to pedestrians during future phases of the project, said Harry Laspee of Pennoni Associates, design and engineer consultants to PennDot.

But businesses are preparing for the worst. With traffic, SEPTA bus detours and possible limits on pedestrian access, stores aim to sell their products in whatever ways they can.

“God love them, they’re very creative,” Jimenz said of the Avenue’s businesses. “Some of them are creating joint ventures. If they can’t operate their business at their store, they can sell their product in someone else’s store. They’re really thinking outside of the box so they can make it through.”

Jimenz hopes that special promotions and discounts during First Friday events will encourage residents to remember the businesses when construction hits the ground, and their profits take a hit, too. The neighborhood is working together to promote the avenue, and to save the community’s livelihood as its prided cobblestones are lifted from beneath their feet.

“There’s always at its core, the desire to work together and solve problems together in Germantown. That remains true, not just of the business community, but of the broader community. Hopefully people will wait out the long, long wave,” Jimenz said. “That’s the only way we’ll get through this.”