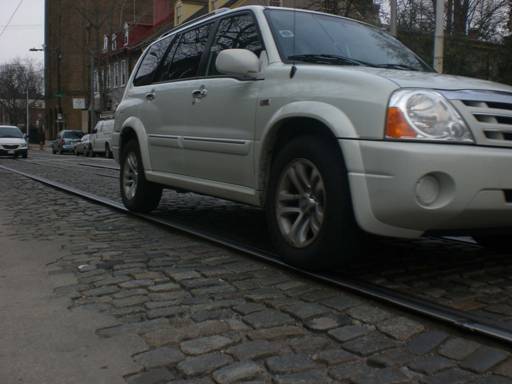 Every driver in the Germantown is faced with a seemingly life-or-death question each time he or she is driving in the area.

Should you drive on Germantown Avenue, risking your tires on the lethal brick that sits instilled in the street, or should you find another way to go?

While many people worry about accidents or mere breakdowns, others see the river rocks as a symbol of the city’s history.

“These cobblestones have always been here,” Germantown resident Nathan Brookins said. “They tried to take [them] out before and the people fought and argued. They belong in Germantown.”

Resident Arlene Matthews-Talley agreed.“[I drive on Germantown Avenue] everyday. Two, three, four times a day,” she said. “I would not like to take them out. It is a nice look.”

Others disagreed, saying they should be removed, good looking or not.

“I don’t really think [Germantown Avenue] needs to remain cobblestone,” Germantown resident Warren Quern said about the road. “I don’t think it looks that nice. I think that it would look nice if it wasn’t a main strip, if it was a neighborhood street. But [Germantown Avenue is] a commercial street.”

Julia Dickerson lives in Northeast Philadelphia, but when she is in Germantown, she is bothered by the jarring roads.

“When I’m on the bus or driving [in the area], it’s very bumpy and very uncomfortable,” Dickerson, who works at a beauty supply store in the northeast, explained. “I think it damages the cars, and I think it needs to be fixed.

“It’s the worst possible conditions driving here,” the resident said. “It’s bad all the time, there’s not really a [specific] condition, it’s a condition on the problem of the cobblestones.”

In actuality, though, while some feel a strong hatred toward the cobblestones, the river rocks cannot be blamed for anything more than making someone who has to go to the bathroom ready to explode.

OK, so you’re thinking, “Well, that’s just one person at one business.”

But Collins isn’t the only person to say his company hasn’t seen problems because of cobblestones.

Since everyone trusts the Midas touch, the words of Carlton Alston, manager of the Midas at 147 W. Chelten Ave., should assure you that it’s OK to drive on the intimidating rocks.

“I’ve worked here 13 years and haven’t seen any cars come in due to problems caused by the cobblestones,” he said. “I use the cobblestones to find noises. They help you to hear if you have anything loose.”

But when the roads are wet, the cobblestones are known to make it hard to keep control of your vehicle.

Laura Keim, who works with the Wyck Association, a group that gives tours of historic homes in Philadelphia, says she has seen problems caused by the mixture of rain and cobblestones.

“The fence in front of the Wyck House has had cars crash into it when the cobblestones get slick,” Keim said about the house located between Germantown Avenue and Walnut Lane. “People drive into the fence [in front of the house] pretty regularly. [They] lose control of their cars.

“It has not happened since I’ve been here, but in the past, people have driven practically right into the house.”

In the end, while visitors are most often shaken up by the cobblestone road, residents have grown used to holding on tight to the wheel and slowing down during poor conditions.

“Sure it’s hard [driving on the rocks], but it’s a tradition and you get used to it,” Germantown resident Stan Johnson said. “It would be a shame to see them go.”

The lesson, then – cobblestones won’t damage your car. Just don’t drive too fast.

And, of course, go to the bathroom before you’re driving down Germantown Avenue.

Read about what cobblestones are. And then, learn why cobblestones are harming the community of Germantown as a $17 million construction project takes its toll on local business trends