In looking back at a century of service to Philadelphians, history shows that the Mann family profession began as one small and ambitious service. Yet by staying committed to a philosophy of providing the finest level of service available, the business has grown into a proud tradition capable of performing all necessary functions for families and friends in their time of mourning.

Craig Mann, 62, has been the Mann Funeral Home supervisor since his father, Henry, died in 1993. The title often used by those in his profession is funeral director, yet Craig prefers the title of undertaker.

The business first began when Craig’s grandfather, Frederick Mann Jr., opened an office at 1745 N. 19th St. in 1909. This was a period in time when undertakers would travel in order to perform their services. After the preparations were made, it was commonplace for the deceased to be placed in their bed until taken to the funeral.

“You didn’t have many retirement homes in those days,” Craig explained. “So Fred would bring his portable equipment and prepare them in their homes or at the hospitals.” 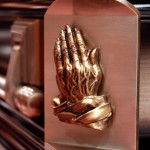 Frederick knew that he would be able to serve his clientele better if he possessed his own preparation and storage facility, so he bought the property at 2305 N. Broad St. in 1930. The Mann family then had a location where they could provide their services in a professional, private and sanitary environment.

During the holidays the Mann’s would decorate a room at the Broad Street location with ornaments and model trains, which they would proudly put on view for the public. These displays became a family tradition, and every year Craig hosts a lively holiday get together for his family and friends.

In 1938, Henry S. Mann, Frederick’s son and Craig’s father, purchased a home at 152 W. Olney Ave. In addition to being a private residence, the Mann’s used the home as a funeral parlor.

Craig remembers the changes that needed to take place before the deceased arrived from the Broad Street facility.

“The home was so small that the furniture would have to be moved before the services,” he said.

The Olney Avenue business was closed when Henry, who was a major in the United States Army, was called upon to fight in Europe during World War II. During Henry’s absence Frederick kept the Broad Street location operational. After Henry returned from fighting in Holland, France and Germany, the Olney Avenue location reopened in 1946.

The Mann’s current location at 219 W. Tabor Road is a funeral home that Henry Mann purchased from the Hessinger family in 1948.The building was larger than the Olney Avenue location, and this allowed for a portion of the house to remain dedicated as a private home for the family.

In 1957, Henry assisted with the burial of a child whose body was found in a cardboard box in a remote area of northeast Philadelphia. The discovery of this “Boy in the Box” attracted national attention and the true cause of the child’s death remains a mystery to this day. In 1998, Craig assisted in the disinterment of the boy, so that DNA sampling could be performed. The child’s remains were then reinterred in the Ivy Hill Cemetery.

Frederick died in December of 1960, and Henry chose to sell their Broad Street location in 1961. He then paid to have extensive renovations done to the family’s Tabor Road property that same year, which effectively doubled the size of the facility.

Among the renovations was the addition of an arrangement office, where the Mann’s meet with families, and an adjoining selection room that displays options for vaults, urns and caskets. Also added were the modern preparation room and storage facilities, as well as a ‘slumber room’ – where the body of the deceased lays in wait before the ceremony.

In 1970, Henry received his pilot’s license and began the Funeral Flight Service. In order to transport the remains to out-of-town funeral homes a Piper Cherokee Six airplane was modified to accommodate a casket or stretcher. By starting this service, Henry eliminated the expenses that airlines were then charging for the shipping of such containers. The multitude of small airports allowed the Mann’s to deliver the remains as close as possible to the necessary locations. This service continued until 1977.

In 1971, Craig Mann graduated from mortuary school at the American Academy McAllister Institute of Funeral Service in Manhattan, New York. He then officially joined the family firm in Pennsylvania as an apprentice, and for one year underwent mentoring by his father. After this apprenticeship Craig went on to complete his education by passing the state and national funeral director exams.

“The rule of thumb I got from my father and grandfather is to do everything the way that you would want it done for your own family,” Mann said. “And do everything as if someone is watching you, because they probably are.”

Craig was involved in the family business from a young age. His earliest responsibilities were hand-engraving nameplates for caskets and printing prayer cards.

Craig also worked part time for the Century Vault Co. and learned about the manufacturing, setting and closing of burial vaults. He also delivered flowers for Kuhn’s Florist Shop during the holidays, where owner Roy Elliott and son Ken instructed him in the basic design principles of the floral business.

“My father thought it was a good idea to learn everything possible about the related fields that impact the funeral business, and he was right,” Mann said. “I took the time to work for, and study, the related industries in order to provide me with a better understanding.”

In 1978, Henry purchased the building at 5440 N. American St., which became the new garage for both the Mann Funeral Home and the Frank Braun Livery Service. In 1984, Mann took over the livery service from the then widowed Hilda Braun.

Craig’s favorite memories include using the limousine from the livery service to take deserving Olney Elementary students out to lunch.

“We would pick up the monthly Honor Students and go to McDonald’s,” he said.“They just thought it was the greatest thing.”

Throughout 100 years of business, the Mann family has gained a reputation within the industry as being consummate professionals.

Joe DiPinto works as a funeral director at the DiPinto Mehl Funeral Home in Philadelphia. He has known the Mann family for over 40 years and has worked with both Craig and Henry Mann. He recognizes the Mann family business as three generations of a great tradition.

“I see other funeral professionals as competitors,” he said. “I see Craig Mann as a colleague.”

When the Harris family experienced a loss of its own, Gary called upon Craig Mann to help through the tough time.

“He is the epitome of a funeral service professional,” said Harris. “I told my family that if anything ever happened to me, Craig Mann is the one who takes care of things.”