The doors of the Germantown Courier, which began in the historic community in 1936, were slammed shut last February. Unfortunately, there was little the staff could do prevent or deter its folding.

In 1998 the newspapers, the Courier and its sister paper, the Mt. Airy Times Express, were bought by the Journal Register Corp.

“They bought as many local newspapers as they could acquire over a short period of time expecting that they could probably save some money on the production end through centralized production,” said Jim Foster, publisher of the Germantown Chronicle.  “Conceptually that may not have been a bad idea, but I think they may have overplayed their hand and didn’t manage the mega-business as well as they should have; they got caught in the economic squeeze.

The Journal Register Corp. attempted to sell the Courier and the Times Express instead of simply closing them down outright, but the rapidity of their demise thwarted any opportunities for the papers’ survival.

“We put together our last issue, that issue date was Feb. 11, and the company filed for bankruptcy I believe the following Saturday, a couple of days later,” said Karl Biemuller, former editor of the Courier and current editor of the Germantown Chronicle.

Both Foster and Biemuller think that had the Courier and the Times Express been independent at the time of their folding, they would have made it through the recession that has claimed so many newspapers.

“Our revenues were down, but they weren’t that far down. We were taken down in the collapse of the Journal Register basically,” said Biemuller.

“Bear in mind these are not a continuation, these are new replacements,” said Foster.

Since their start in the new location on Germantown Avenue, in the historical Clarkson-Watson House, which once accommodated President Thomas Jefferson, the papers have reached 36,500 in weekly circulation. They cover all of Germantown, most of Mt. Airy and parts of Chestnut Hill.  As they are a free publication, the Chronicle and the Independent depend solely on local advertising for funding.

“I think the recession has affected every business,” said Foster. “The type of folks that would advertise in these types of local newspapers see them as more important than ever before.  But, budgets are what they are for everybody; if business is down and your budget is restricted, you have to make certain decisions.”

In order to keep businesses coming back to the Chronicle for advertising purposes, the staff has extended a credit system.

“We do want to maintain a working relationship. Cash flow is important and it’s a critical side of this business. We try and work out a balance between them and us when it comes to paying the bills,” said Foster.

With the business model of the papers set up for success, Foster and Biemuller were able to focus on exactly what they could give to the community.

“The most frequently heard complaint that I had heard over my last 10 years of being involved in the community was that a lot of the local residents felt they didn’t hear about decisions that were going to impact their lifestyle or community ‘till after they happened,” Foster said. 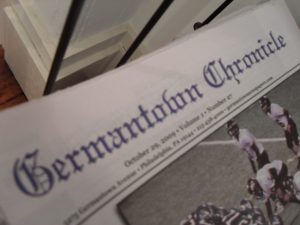 Thus, he and the staff at the Chronicle made it their mission to not only inform Germantown residents but help them participate in the decision-making processes of their local government.

Foster thinks that the Chronicle has a fighting chance to survive in this economic climate because it is so specific to the needs of Germantown residents.

Unlike its mainstream counterparts, those at the Chronicle feel a little safer from being shut down by the recession due to the local nature of the paper and the specific need it fulfills for the people of Germantown.

Furthermore, Foster thinks that there is no threat of the World Wide Web hindering production.  Because no Internet-based publications supply Germantown with such specific information, he thinks the percentage of aging individuals making up Philadelphia’s population are not ready to give up on newspapers.

“The percentage of middle-age and senior people in the community is pretty high, and they haven’t all jumped to the latest technological sources as their first option,” Foster said.  “They’re used to holding a newspaper in their hand, they’re comfortable with it.”

Though the Mt. Airy Independent and the Germantown Chronicle are published by the same people, Biemuller thinks that the Chronicle is more of a necessity to the residents of Germantown than the Independent is to Mt. Airy.

“Mt. Airy is a relatively affluent community; it’s technologically savvy, [and] it has community organizations that have reasonably decent ways of getting information out.  Germantown has none of those,” Biemuller said.  “Germantown needs the Chronicle.”

Because of their ability to be independent newspapers in the community and  free of business or political influence, the staff at the Germantown Chronicle and the Mt. Airy Independent feel confident that the papers will survive to see the end of the economic downturn.

“Newspapers are very much in flux. It’s all subject to change. I do believe community papers like ours will survive as long as newspapers last because they provide something that you can’t get elsewhere, particularly in Germantown,” said Biemuller.

Both Foster and Biemuller are optimistic about the growth of the newspaper, hoping for an increase in page count and dispersing to areas of Northwest Philadelphia that have lost their local weeklies.