In an attempt to teach students about respect and anti-bullying, James Ludlow Elementary School  has partnered with the Anti-Defamation League as part of a program called “No Place For Hate.” Anti-Defamation League counselors come in to the school, which is located on 550 W. Master St., to talk to the teachers first and then the students about the importance of preventing bullying.

Sally Moore, the health and physical education teacher at James Ludlow Elementary, says that she is proud to be a part of the “No Place For Hate” program, which she believes is effective. 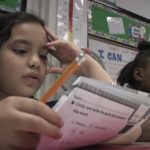 “One of the constructive ways of dealing with [bullying] is to empower the bystanders because there are always more people watching the bullying than is actually doing the bullying or being the target of a bully,” says Moore.

The school also has the benefit of not having a huge number of students in its student enrollment of 300, which allows for smaller classrooms of about 20 students on average, more intimate relationships between students and teachers and more teachers available to stop bad behavior from occurring.

However, these are only measures taken to make this school and even better school. School principal Charlotte Buonassisi, says. “I have a damn good school. It’s a well kept secret in North Philly.”

Buonassisi says that her school is doing very well in spite of the economy because it has received a lot of stimulus money, but she is worried about next year when most of that money will be gone.

The school has a solid attendance rate of 94 percent, but Buonassisi believes that her school needs more help, especially in the mental health departments.

“We need more mental health services here because they get the crap-end of the stick because they are low income,” says Buonassisi. “They [the mentally challenged] need help. They really need help.”

In fact, according to Buonassisi, 88 percent of the students at James Ludlow Elementary come from low-income families and don’t get the right amount of attention or they do not come from homes with good influences. “A lot of them go through things that you and I will never go through,” says Buonassisi. 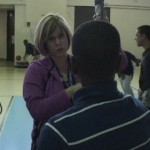 The principal says that one student is severely depressed and occasionally comes into the office to cry. Buonassisi describes the student as “couch surfing,” which means that the student does not have an immediate family, but jumps from the houses of various relatives.

The teachers are the ones who take students under their wings and provide much more than just an English or a math lesson. When the students are having a bad day the teachers will talk to the students to help calm them down. Sixth-grade student Crystal Barhal has a unique and meaningful relationship with her second-grade teacher and her gym teacher, Sally Moore.

“The teachers give you respect and you’re supposed to give them respect back. Some kids don’t understand that, but I do,” says Barhal. “When I get upset, I get upset fast. I usually told my Mom, but now I just go to the teachers that I like, they calm me down, and I just go back to my class, I apologize, and it’s over.”

Sally Moore is one of the teachers who Barhal goes to for help. Moore has been teaching at the elementary school for eight years. She commutes an hour each way from the suburbs to make it into work, but she says that it’s all worth it for the relationships that she has with her students.

“I think sometimes you don’t know what you’re impact is. Sometimes we come in and we do our job and we leave as teachers and you just keep your fingers crossed and hope that the message is getting across,” says Moore. “I’ve spent considerable effort and time with Crystal. She’s a wonderful athlete. But, just like a lot of our kids, they need a lot of attention and a lot of additional care.”

Buonassisi says that it’s important for these students to have established, meaningful relationships with some of their teachers because they cannot get those same relationships at home or anywhere else.

Buonassisi also believes that these students just need motivation and optimism in order to help them prosper in hopes of getting a good education and succeeding in the future.

The principal and the teachers of Ludlow Elementary truly have an impact on their students as they make them believe that not only can their students achieve their goals, but also they will achieve their goals. A student in the second grade wore a T-shirt given out by Ludlow Elementary as part of the uniform that read on the front “I am a Ludlow student.” Fittingly, the back read “I am going to college.”