A snaggle-toothed little boy, with the help of an older woman, slowly and carefully reads, “The sun did not shine. It was too wet to play. So we sat in the house all that cold, cold, wet day.” A few lines from the world’s favorite doctor, Dr. Seuss’s “The Cat in the Hat.” Across the room sitting at a little red round table, no more than three feet off the ground, sits a bright-eyed little girl reading what looks like a comic book. It’s Japanese anime, with way more words than anything ever published by Marvel. 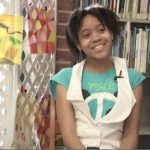 “I have learned a lot of new things like art and computers,” says 12-year-old Stavonne Jackson, a sixth grader at Young Scholars Charter School. Jackson visits the Ramonita De Rodriguez Branch Library every day throughout the school year to meet up and with her friends who attend different schools during the day, but participate in the library’s academic enrichment program, or LEAP. Jackson, an honors student, says she is grateful for the program because she is able to finish her homework at school before she leaves for the day so that she has more free time to spend with her friends drawing, modeling, acting or reading.

LEAP is an after school program designed to provide activities outside of the school. The program encourages reading, exposes students to traditions of other cultures and cultivates art skills. Tutor Jenna Wilchinsky says, “If the schools don’t have arts and/or technology programs–a lot of schools don’t have funding for that–we try to do that here, as well as help with homework.”

The LEAP program serves at least 15 to 20 kindergarten through 12th-grade students Monday through Friday. Wilchinsky believes this program is fulfilling because she feels more connected to the community she lives in, but she fears the city government may not recognize the impact libraries have on communities, especially the importance the Rodriguez Branch has to Ludlow residents. 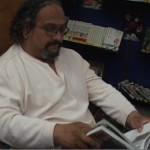 Stephen Toriani, a resident of the Ludlow community for over 40 years, says he enjoys coming to the library for Wednesday chess night. He enjoys seeing all different ages enjoying the library in many different ways, “Sometimes I think City Hall pays more attention to their pocketbooks than to what the people actually need.” Toriani has seen several libraries close in the last three years, and as a result noticed more people from surrounding neighborhoods, like Northern Liberties, Kensington South, Olde Kensington, and East and West Poplar areas stopping in to access the Internet to find jobs and type resumes.

Rodriguez branch manager Eric Eskin says despite his particular branch not being at risk of being closed, he has felt the crunch as there are less materials and staff cuts. His salary of $58,000 a year is nice, but he would the city to be able to provide more resources for the faithful patrons of the Ludlow community. 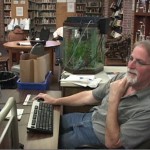 Wilchinsky would love for her position to be full time, but she has to work a second part-time job just to pay her bills because of the branch’s lack of funding. As a part of the LEAP program witnesses the power of Rodriguez Branch every day. “If libraries close, it would be a big loss, especially in education,” she says.

Originally named the Girard Avenue Branch, the City Council renamed the library in 1977. The Ramonita de Rodriguez Branch library is named in honor of a Puerto Rican educator and community leader. She served as a supervisor in the bilingual program of the Philadelphia School District.  Located at 600 W. Girard Ave., the library has been in the Ludlow neighborhood since 1968.

In addition to the LEAP after-school program, the Rodriguez branch has preschool story time every Friday to promote literacy early, Generations Online is intended to instruct senior citizens on basic computer skills and to encourage volunteer opportunities to high school students to tutor younger kids.