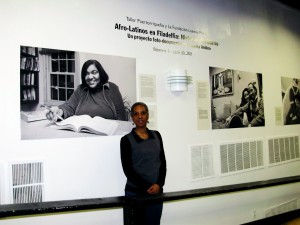 This spring, the Taller Puertorriqueño community center is exhibiting a photo-documentary project by the center’s director of education, Dr. Sandra Andino. “Afro-Latinos in Philadelphia: Stories from el Barrio” has included a series of photographs partnered with short discussions between Andino and local residents whose families have immigrated to North Philadelphia from Latin America, among other places. Some participants spoke of the adversity they had experienced through the years while others described the ways their culture makes them feel empowered. However, each one described how they felt the importance of coming from the background they did.

On display in the center’s Roberto P. Hernandez Theater, the photographs and excerpts from Andino’s dialogue with participants show how these strong people have embraced their Afro-Latino heritage and culture through traditional music, poetry and other pursuits. According to the center’s website, the goal of the exhibit has been to “create social awareness and a collective conscience about the connection of Latinos and Latinas to their African heritage.” The exhibit runs from Feb. 4 through April 30 at the community center located at Fifth and Huntingdon streets. It is open weekdays from 9 a.m. to 6 p.m. for all to get an illustration of one of Philadelphia’s many unique cultures.

Philadelphia is widely known as one of the most diverse cities in the United States. It is home to people of many different cultural backgrounds, who both flock together and assimilate into American culture. Northeast [continue reading…]

The different types of restaurants, shops and boutiques on Germantown Avenue underline the fact that Chestnut Hill has plenty to offer for everyone no matter what their background may be. For example, people who enjoy [continue reading…]