Graffiti as a form of urban regeneration?

“The city realizes that (graffiti) is a part of the city and that it needs to be incorporated in some way,” Rasty, one of premier graffiti artists in Johannesburg, said. “Johannesburg is more open and they understand the more positive and beneficial aspect of graffiti in terms of urban regeneration.”

Modern graffiti in South Africa has a short but burgeoning history. This art form for some, irritant to others, didn’t become a movement in South Africa until the mid-1980s erupting initially in Cape Town.

The graffiti scene in Johannesburg, South Africa’s largest city, is less robust than its American and European counterparts. Yet, this primarily urban art form has been making headway within the past decade. From Newtown in Central Johannesburg, to the East through Maboneng and Troyeville, walls and buildings are adorned with designs and images made by paint from a spray can, creating a highly unique cultural identity.

In pursuit of making Cape Town the ultimate tourist destination, that city has implemented a series of bylaws and regulations in an effort to stop the spread of graffiti. Cape Town even institutied its own force, the Graffiti Enforcement Unit, to catch street artists in action.  Similarly, the City of Philadelphia established the Philadelphia Anti-Graffiti Network in January 1984 to combat mushrooming graffiti during the mayoral term of W. Wilson Goode.

In contrast to Cape Town, the Johannesburg Development Agency has established its own policies to promote public art. Susan Monyai, JDA Marketing Manager, said, “We spend an amount of up to 1% of total capital expenditure budget on public art. The public art that we install normally has historical reference to the area in which it is located or a social reference”.

Monyai continued, “Graffiti is a form of public art expression that JDA has commissioned in some of our development areas. If it is managed correctly it certainly adds to the aesthetics of the streetscape and provides a different form of artwork in the space economy”.

Uniquely, Johannesburg has a touring company, Past Experiences, that conducts graffiti tours every weekend. It was Rasty who 2 1/2 years ago approached the head tour guide at Past Experiences, Jo Buitendach, to form walking graffiti tours. These tours are divided by areas, covering places such as Maboneng, Troyeville, Newtown and Mayfair.

“Graffiti adds a lot of color to the city, so we are very fortunate. There are positive sides to it” Buitendach said. “But we also have bigger problems as well, so graffiti is the last thing on everyone’s mind”.

Bonanga Mathabule, who freelances for Past Experiences, said that “The city’s identified graffiti as an important part of Johannesburg. It’s quite interesting that graffiti is transforming from being this whole illegal thing to being something that everyone appreciates”.

Rasty, who chooses not to reveal his last name, feels he is “fortunate to live in a city that has a lot more flexibility in terms of graffiti than most”. 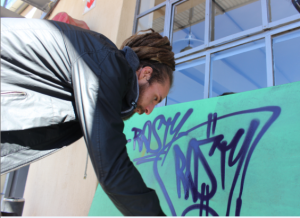 Rasty opened his paint shop, Grey Scale, in 2007 next to the University of Witwatersrand campus in Braamfontein, with German artist Angel and another local big name, Curio. Together this trio called themselves the Pressure Control Projects, or PCP Crew.

“We were the first to start bringing in other international graffiti brands of spray paint and to provide a platform for the people. We leave it as an open place where you can come in and get all the materials you need, ask for any tips and at that same time meet other graffiti artists because that’s the way you learn the most, you find guys that are either a bit ahead of you or on par with you and you learn together” Rasty noted.

Since its formation, the PCP Crew has received public and corporate art commissions, with works ranging from giant murals to live events. Other projects include works with Nokia, Sprite, Nike, and Absa.

The act of writing or drawing on a public space has existed ever since the early cave inhabitants picked up a drawing tool which eventually traveled through Ancient Egypt as well as the Ndebele people of South Africa.

Jump ahead to the 1960s and a more rebellious form of elaborate wall paintings was formed: graffiti. Graffiti was primarily used as a tool to express dissent and dissatisfaction, sometimes through social and political messages; other times used to just scrawl one’s name. It was a symbol of angst and anti-establishment and was quickly regarded as a form of vandalism. But eventually, an art form started to arise and people discovered the infinite possibilities with a can of spray paint.

The important path in the history of modern graffiti runs along the streets of Philadelphia. Writers such as Cornbread and Cool Earl were credited as being among the first well known graffiti writers. Their names were strewn all around the city, ultimately garnering local news media attention. Through Philadelphia the graffiti scene dispersed to New York City in the 1980s, a time that many regard as being the most illustrious for graffiti in the United States.

“That was the first kind of stuff that we saw, before the internet was such as big thing. All we got was little bits and pieces from magazines and books” Rasty said.  “So the New York artists were the initial influences on all of us. You can see the basis in most graffiti artists here starts with New York graffiti and it expands from there”.

At the age of eight, Rasty’s family moved from Durban and settled in central Johannesburg. In 1999, he was introduced to graffiti after seeing Cape Town pioneers Gogga, Mak1one, and Falko painting murals at a party.

“I’ve always drawn since I was a kid. Always been into art, I drew a lot of comics” Rasty said. “So when I saw graffiti it just kind of spoke to me. It appealed to me because of the imagery and the size and the scale of the work. So it was just a natural transition for me. I knew it was just what I wanted to do”.

Currently, Rasty works at his tattoo parlor, 1933, which shares the same space with Grey Scale. As he grows older, Rasty has less time to go out “tagging” everyday, so he focuses more on large scale projects when he has the time. Tagging is the most prevalent and basic form of graffiti, usually just a stylized signature on the wall. In most areas, it is considered vandalism, unlike the large murals. But neither can exist without the other, Rasty believes.

“You can’t have one without the other; people didn’t start out painting these huge murals with spray cans, it started with the basic and that was just scribbling your name. So we hope people will start realizing that there is more to it and that it is an evolution. When you start out you do all these young and rebellious things but if you’re serious about it you’ll take the art form seriously and expand on to big murals”.

South Africa: The Peoples’ Doctor and the Revolutionary

https://vimeo.com/40663260] This documentary tells the story of a medical doctor and anti-apartheid activist, Abu Asvat, who was killed by two gunmen while treating his patients in Soweto in 1989. The documentary uses interviews with black [continue reading…]

More than 15,000 children are severely burned each year from fires in South Africa. An organization called Children of Fire was created in 1997, to help child survivors. Dorah Mokoena was 6 months old when [continue reading…]

A group of Roxborough teens from the Salvation Army recently visited South Africa. Read about their trip on our partner’s website, www.newsworks.org at https://bit.ly/kZoTOg