In recent years, the merger of various Catholic schools in the region has made local headline news. But behind the scenes, the parishes that stand behind those schools are struggling as well. Some parishes are now being forced to merge together in order to survive.

St. Leo’s and Our Lady of Consolation, both located in Tacony, were informed they are now going to be praising as one. The transition for churchgoers is underway to attend the main location at Consolation, though there is one morning mass still being held at the St. Leo’s on Sunday mornings.

Father Joseph Farrell is one of the pastors sent to Our Lady of Consolation to make the transition go smoothly for their worshipers. With his role as pastor at the new main location, Farrell has created ways to help everyone blend together as one.

“Things are going as well as can be expected,” said Farrell. “We put together a calendar for the parish and it involves both traditions.”

In order to keep all traditions alive, a committee was created. This committee consists of people from both parishes. Annette Dimichele supports this committee and the way they are helping the transition.

“Some people from St. Leo’s and some people from Consolation sit down and, you know, work things out,” said Dimichele. “We come to a happy medium as to having these events and being successful.” 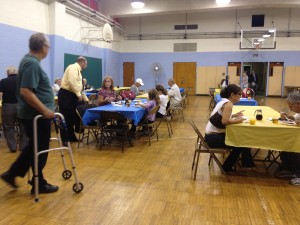 An event held last Sunday morning was an example of these traditions. A pancake breakfast was held after the 11 o’clock mass. This is a tradition that was held frequently at St. Leo’s.

Attendance at the new venue has been up and some new faces have emerged at mass.

“There are more people in the church, which is good,” said Dimichele. “You know it can’t hurt.”

The way to keep this new community alive is getting people to come to mass. So far this seems to be going well.

“Overall, there is an increase in worshipers as well as collections,” said Farrell.

The Northeast Animal Rescue (NAR) will be holding its adoption weekend Feb. 12-13. NAR is a non-profit animal rescue organization. “We are dedicated to saving homeless, unwanted and abandoned cats. NAR focuses on having feral [Read More]

The Jack Costello Boxing Club is a nonprofit organization that was founded in 1996 by Tim Costello and his family in honor of his late father. “After he passed, we figured what the heck,” said [Read More]