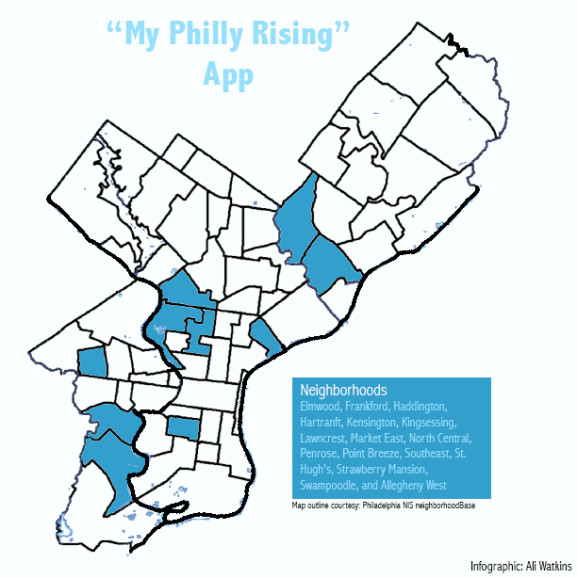 The city announced last week a new mobile and web application for its PhillyRising Collaborative.

PhillyRising, which is run through the Managing Director’s Office, targets high-crime areas where there are quality of life concerns and unites community members and organizations to address the issues, according to its website.

The myPhillyRising application serves 16 neighborhoods in the city including Elmwood, Kensington and North Central, according to a release announcing the application. The application, which can be accessed on a computer or mobile phone, will include upcoming events for communities, locations of facilities and a discussion forum on the neighborhoods, the release stated.

“The myPhillyRising app is the latest tool in the city’s efforts to engage residents in improving their neighborhoods,” said Managing Director Richard Negrin in the release. “It helps residents connect with neighbors and resources in their neighborhood, including those that can help close the digital divide.”

John Farrell, deputy managing director, said in a statement when the application was announced that it would make connecting the community and addressing issues easier for residents.

“Connecting residents who are interested in improving their neighborhoods is part of the core mission of PhillyRising, and this app will simplify that process,” said Farrell.

Residents like Vivian VanStory of North Philadelphia said the application would be used by the residents because of its ability to connect the community.

“Of course, we’re going to use it,” she said. “It’s important to let [the city] know what’s going on in the community.”