Bicycles are a popular mode of transportation in most large cities, including Philadelphia. That’s why bike theft in the Graduate Hospital area has become a major issue.

In 2008, Kryptonite, a major manufacturer of bike locks, rated Philadelphia as the worst city in America in regards to bike theft. This means bikers not only get their personal property stolen but also take a hit to their wallet.

“We mostly see people coming in to replace stolen seats or wheels,” said DJ Clemens, a bicycle mechanic at Bicycle Therapy on South Street. “It really just becomes an expense and inconvenience to the rider.”

Graduate Hospital resident Lee Gregg said, “I just moved from Chicago where theft isn’t as heard of. My friends here get parts stolen quite a bit and pay a lot to get them fixed.”

The South of South Street Neighborhood Association created a registry on their website where people can register their bikes with the 17th Police District. This way, if someone tries to sell a stolen bike, it can be returned to the owner and the suspect can be apprehended.

Clemens, a victim of bike theft, gave bike-saving advice: “Buy hardy locks that weave between the wheels, take in your seat and don’t leave your bike unattended for too long.”

Have you been a victim of bike theft? Tweet us and tell us about it @philaneighbors. 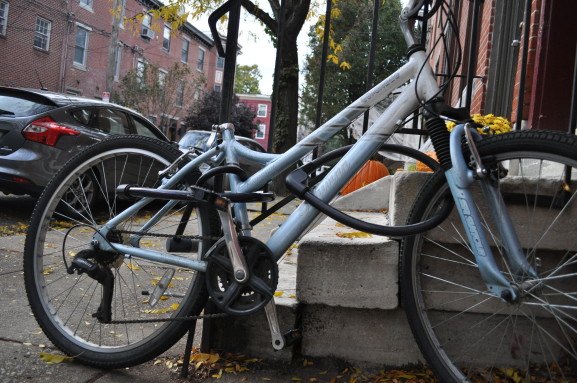 Stacy Redmond remembers when one of her neighbors used to unplug the fire hydrant on her small South Philadelphia block. Kids would play in the water, trash and grime would be washed away along with troubles at work [continue reading…]

Sandy Kauffman and her husband left Radnor and bought their Graduate Hospital home in October 2008. They paid $260,000 and received 10-year tax abatement for construction. Their property tax is under $2,000 annually. “I get [continue reading…]