Dylan Baird, founder of Neighborhood Foods, began getting involved with urban farming, specifically the Urban Tree Connection, in 2009. This work, coupled with his own personal interests, led Baird to pursue this field and create his own business. 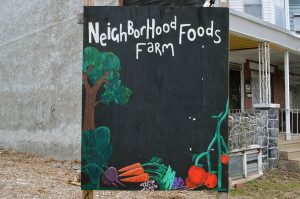 “I was really interested in urban farming and the business model of urban farming and farmers markets as catalysts to community cohesion, bringing neighbors together and dealing with food access,” said Baird. “One, by just supplying fresh foods, but also creating a conversation around food [such as] how to cook it, different recipes, what’s good for you, things like that.”

With this passion, Baird drafted and submitted a business plan to convert a vacant three-quarter acre lot near 53rd Street and Wyalusing Avenue in the Haddington section of Philadelphia into a community farm space. He won Temple University’s Be Your Own Boss Bowl in 2013 and the concept of Neighborhood Foods became a reality.

“It’s part of our mission which is to bring local, responsibly-grown foods out of a niche market place and really make it affordable for everybody,” said Baird.

Lisa Barkley, administrative assistant at the Urban Tree Connection and advisory group member at the farm, is proud of the wide variety of produce that has been available to the community since the farm has begun.

“Since the farm, we’ve ventured out,” explained Barkley. “We eat eggplant now. We eat a lot of squash now. We’re [also] growing bok choy, leeks and lots of different types of kale.”

Neighborhood Foods also acts as a community hub that brings more to the table than just fresh produce. The farm brings together community members of all ages through volunteer opportunities and educational and cooking classes, as well as through hosting neighborhood events such as block parties.

“[The farm] has been very helpful for the community; it gives kids the opportunity to volunteer in the neighborhood,” said James Collier, a 49-year-old resident of the area whose son had volunteered to help with the space in the past.

Roberta Harvey, 59, also recognizes the benefits that the farm has for this block.

“I think it’s ideal especially for senior citizens,” said Harvey. “It gives them something to do and walk around, get fresh vegetables, and gives the children something to do.” 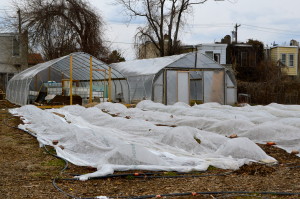 The block is also brought together by its composting efforts through Bennett Compost, a curbside compost business that services the Philadelphia area. Bennett Compost services approximately 25 households on the block to different capacities with some participating more regularly than others. The business collects between 75 to 100 pounds of compost on the block per week, contributing to a more sustainable way of living.

Larissa Carney-Vann, a 49-year-old resident, sees how the farm impacts the area. 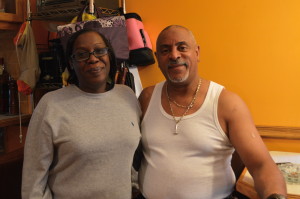 “I think in general, any kind of activity that brings neighborhoods and neighbors together…and engaging in the same activities and coming together around a shared space, helps to deepen the bonds of the community,” said Tim Bennett, founder of Bennett Compost. “And it helps to kind of make everyone a little bit more aware and [brings them] a little more together.”

Joann Manuel, advisory group member for Neighborhood Foods and block captain of Pearl Street, helps to run the community farmer’s market during the season that is located next to the farm. She explains how it’s important to talk to others about urban farming and get the word out there about trying something new.

But new foods aren’t the only new experiences for people who come to Neighborhood Foods.

“We’re making new friends and new acquaintances,” said Manuel. “We’re establishing new relationships and bonds with people who are here in the community.”

For Baird and the areaaround 53rd and Wyalusing, it’s about a community space and what it can do.

“To think about what was there from before [and] to see the fruit that can be produced on what people thought of as this negative and awful thing and to see it as a positive and productive thing,” said Baird, “I think that is kind of symbolic of why space and what we do with space is so important.”

– Text and Images by Caitlin Cowan and Joanne Caruso

Philadelphia is a city rich in history and culture but much has changed since Billy Penn was here. The soon-to-be weekend home for the Pope has more a dozen fortune 500 companies and several large […]

The prominent Fishtown art scene has just taken a new role in engaging local residents and utilizing a green approach for a better community through the neighborhood’s very own mascot: a fish. Throughout Fishtown, people […]

Over the past 30 years, Rebuilding Together Philadelphia has renovated neglected homes and assisted people earning low-incomes in specifically selected areas of the city. On June 1 and 2, volunteers, experts and neighbors reconditioned 10 […]