“I don’t know half of you but I love all of you,” said MJ Harris – a rapper, teacher, storyteller, poet, actor and cancer patient – setting the tone for the first Inter Genre Story Slam.

In an act of widespread solidarity, members of the comedy, poetry and storytelling communities converged on Sunday for a joint venture at Saint Declan’s Well. The event was organized by storyteller Steve Clark, with all of the proceeds going towards Harris’ medical bills. 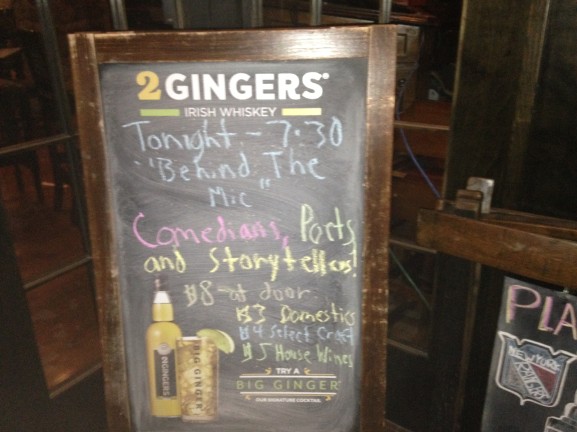 “He’s an artist,” said Clark. “He’s a teaching artist. So when he doesn’t work, he doesn’t get paid. When I told other storytellers and comedians about it, they jumped to the cause and were happy to help out.”

Contributions at the Inter Genre Slam came from those who were familiar with Harris and those who weren’t. Former QVC employee Jim Breslin, author of Shoplandia, read an excerpt from his book and then announced he’d be selling them in the back for $12, with half of the proceeds going to Harris.

Performers’ names were pulled out of a hat and they were given five minutes to wow the judges as well as the audience. The signal for the end of a set – a shrill note played on a recorder – often went ignored, but no one seemed to mind.

Performances covered a wealth of subjects. Storyteller Sean Carney recalled on a vacation to Grenada gone awry (he was chased by a raging cow). Poet Michael O’Hara riffed on the evils of cubicle life. And comedian Natalie Levant ripped on her three daughters -in-law with vitriol.

Despite their differences, Sean Carney believes the three art forms have a common thread.

“I think the commonality is that we all need therapy,” Carney said with a laugh. “We all need serious amounts of psychoanalysis. But the common theme is that it’s just people that have something to say and they are of the mindset to want to share them with other people.”

The winner of the Inter Genre Slam was comedian Chanel Ali.

The night concluded with a performance from Harris’ hip hop collective, Se La, who broke into an impassioned rendition of the Steve Miller Band’s “Time Keeps On Slippin’.”

It was announced that the Inter Genre Poetry Slam raised $482.