Nicholas Gillette watched as fellow acrobats from the Almanac Dance Circus Theatre rehearsed complicated maneuvers a few feet behind him.

“Steer whole heartedly into that,” he said.

The “that” that Gillette is referring to is the love that he and his team have for live performance arts. The five-member ensemble infuses acrobatics, storytelling and physicality into their performances. Almanac is a resident theatre company of the Philadelphia School of Circus Arts in Germantown.

“I don’t know if you can count like third grade,” Gillette said, “but I’ve always been on stage in one way or another, for what feels like my whole life.”

Gillette grew up in Downingtown, graduating from Downingtown High School in 2002. He moved to the city shortly after and has been involved in Philadelphia’s performing art scene for several years.

In 2008, Gillette began instructing and performing at the Philly Improv Theater, a comedy theater and training center with programs in improve comedy, sketch comedy and stand-up comedy. While at PHIT, he directed the critically acclaimed improv performance “Myths & Monsters” as part of the 2012 Philly Fringe Festival. He still teaches at PHIT today. 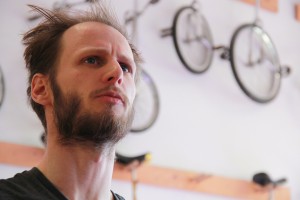 “We started working together and, almost at the same time, had this idea that we needed to make a dance acrobatic collaboration happen now,” Gillette said.

In 2014, Gillette and Grinberg both completed Master of Fine Arts equivalent theatre training as members of the inaugural class of the Pig Iron School for Advanced Performance Training.

Located in Kensington, the Pig Iron School is a rigorous training school focused in physical and ensemble-based theatre. Partnered with the University of the Arts, the school has amassed theatre artists from various backgrounds who all share the shared desire for taking a more contemporary approach to theatre.

After graduating from the Pig Iron School, Gillette became a resident artist at PSCA through Almanac.

Gillette described the work he and his team develop as their trying to bring together the aesthetic of dance and the human elements of acting and drama. 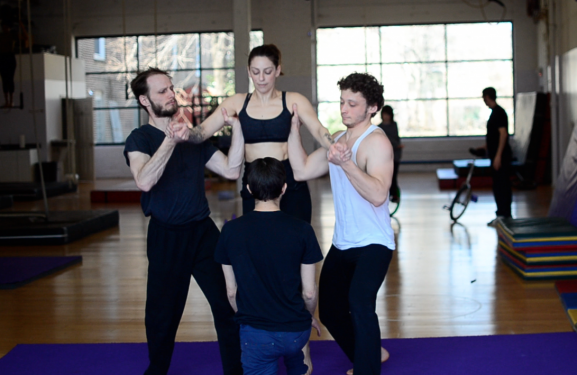 “An interdisciplinary mix is what we do,” Gillette said.

“We’ve gotten really close through just making art together,” Grinberg said. “We’re always trying to figure out what we can do and how we can make things harder or more exciting. There is a real feeling of risk in the room when people watch us perform.” 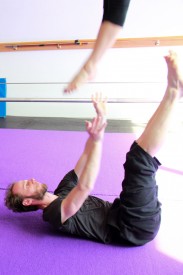 Shana Kennedy, founder and executive director of PSCA, feels as though Philadelphia’s presence is circus arts is shifting.

“Philadelphia is becoming a really central hotbed for circus arts,” Kennedy said. “New York has always been a big area, but New York is so competitive and expensive that a lot of artists are gravitating more towards Philadelphia. So we are actually really proud of having an amazing caliber of circus artists here in town and it’s growing all the time.”

David Ramsay, a juggling instructor at PSCA, thinks that Philadelphia art comes naturally, rather than being forces.

“I find that Philly is a non-assuming city,” Ramsay said. “Philly is like a blank slate. Nobody expects anything from Philly and so the art just kind of happens. 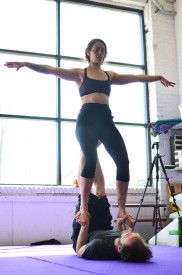 Gillette and his team have embraced the Philadelphia performing art scene and perform at various venues throughout and around the city. The company is currently touring its show entitled “Communitas.” Additionally, they contract out to different events including ThinkFest and various street festivals.

In addition to performing, Almanac has an education program which tours at different schools in the area and teaches students how to safely collaborate using acrobatics.

“It feels nice to have all these different ends,” Gillette said.

For Gillette, performing arts is something that he has been consistently drawn to for years. His encouragement to those interested in it is to keep pursuing and just do it.

“It’s so easy to get caught up in your head,” Gillette said. “Stop thinking about it and just do it… Just continue taking one step at a time towards whatever that ultimate goal is.”

– Text, images, and video by Jared Whalen and Lauren Dunn.

Near 35th Street and Mantua Avenue, next to the bustling trains traveling east and west, sits is a quiet home. The owner of that home, now at the age of 73, has seen Mantua transform for […]

The steady increase of adolescents and young adults riding all-terrain vehicles illegally on the city streets has prompted City Council to take the initiative in finding a solution. Councilwoman Blondell Reynolds Brown has announced public […]

Being transgender in Philadelphia is still something that incites violence and discrimination, but not nearly as much as it used to, according to Elizabeth Coffey Williams. “I lived the white-picket fence, husband, dog, swimming pool […]