The product of a 2010 merger between two of the region’s oldest business associations, the Greater Philadelphia Alliance for Capital and Technologies has an extensive history at a young age.

The organization aims to strengthen the area’s tech community by connecting entrepreneurs with investors, large enterprises and universities – the same goal its predecessors, the Eastern Technology Council and MAC Alliance, pursued for two decades. Still, combining two storied groups was a challenge.

“Both organizations had large boards and so in putting them together, we had to reconstitute the board, freshen up the participants and focus on the entities and individuals that had been really committed to either one organization or the other,” said PACT’s CEO Dean Miller, who oversaw the merger as chairman of the MAC Alliance.

Since then, the nonprofit has adopted a broader focus on the business community.

“We’ve been concentrating not just on the seed-stage entrepreneur, but also on the enterprise, so the Comcasts, the Independence Blue Crosses of the world that have real innovation initiatives are now increasingly a part of PACT,” Miller said.

Miller, a local investor for more than 15 years and the president of Wayne, Pa.-based Novitas Capital, said he’s recently noticed a growth in technology entrepreneurship, particularly in the city, despite a consistent drop in state funds for Pennsylvania’s Department of Community and Economic Development since 2008.

He attributes the increase to groups like his own and Philly Startup Leaders, as well as programs at nearby universities. Census statistics also show that the area has maintained a relatively steady number of tech, business and science firms since 2008: 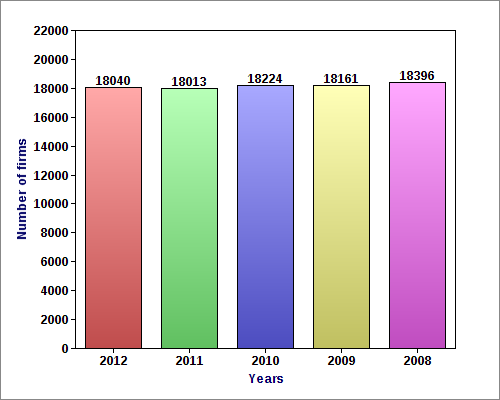 Encouraging entrepreneurship is the premise for “Innovate in PA,” an initiative created by PACT and the Ben Franklin Technology Partners. Inspired by similar laws in other states, it uses $100 million in insurance company tax credits to raise capital for startups.

To promote the plan, representatives from PACT and BFTP visited public officials in Harrisburg with a group of CEOs and investors who were recipients of early-stage capital.

“We wanted to share with them how important it is to have this early-stage capital to prevent entrepreneurs from moving to another state, but also to expand jobs here,” Miller said. The plan passed through the legislature in about a year. The quick turnaround, he believes, is in its projected creation of almost 2,000 jobs statewide.

Now, PACT’s six-person staff is developing a mentorship program to connect new and experienced entrepreneurs, as well as growing its foundation, which backs STEM-based education initiatives.

“Education is an issue that is deeply enveloped with our core mission,” Miller said. “When we look at this city, there is great potential and that will be underachieved if we don’t correct the education issue in Philadelphia.”

PACT’s annual luncheon to support the foundation was June 5. The event is one of 30 the organization hosts yearly.

“That face-to-face connection is something you only experience by getting out from behind the walls of your office or apartment,” Miller said. “That’s what helps people create business relationships that are relevant to what they’re doing.”

Mural-covered and filled with sounds of chatter and faint music, Old City’s co-working space Indy Hall sees a rotating cast of about 70 of its 300 members daily. The two-story building, adorned with Christmas lights [continue reading…]

Debbie Anday started Stash Spot in March to hopefully solve an issue that has become more common since the start of the pandemic: people stealing unattended packages from resident’s porches and stoops. These so-called “porch pirates” are rarely caught, but frustrate residents regardless.  [continue reading…]