The Delaware River waterfront is in the midst of a complete restoration. Powered in large part by the efforts of the Delaware River Waterfront Corporation, old piers and vacant lots have been (and are being) transformed into beautiful public spaces for Philadelphians to enjoy. However, some abandoned relics of days gone-by still remain and spark the interest of those who pass by them. The following is a list of five places at the waterfront that have, despite rich histories, been abandoned:

The Port of Philadelphia operated a cruise ship terminal until 2011. Royal Caribbean and Norwegian Cruise Lines operated ships from the port. The port was far from the ocean and thus travel to international waters took longer than it did from other ports. Cruises out of Philadelphia were ended and the former space has been used for various other projects.

Construction of the USS John F. Kennedy began in 1964 at Newport News Shipbuilding in Virginia. The aircraft carrier, built for the United States Navy, was christened by former First Lady Jacqueline Kennedy and her daughter, Caroline, on May 27, 1967.

The ship spent most of its service time in the Mediterranean Sea and near the Middle East, where political tensions were high during the Cold War. Budget constraints and the growing need for repairs caused the Navy to officially decommission the ship in 2007. The Kennedy’s future was uncertain, as the Navy was planning to convert her into a museum. The Philadelphia location of the Inactive Ships On-Site Maintenance was the closest one to Norfolk, so the Kennedy was tugged there in 2008 until further plans could be made.

The Delaware Power Station was built in 1917 in the midst of Philadelphia’s industrial revolution. Located near Kensington, which was the center of the city’s industrial activity in the first half of the 20th century, the Delaware Power Station was relied on by thousands of businesses and homes. Although the station ceased operations in 1984 and was abandoned as a power plant, it has been used for movie sets in recent years. Transformers 2, The Last Airbender and 12 Monkeys filmed scenes in the power station.

From 1982 until 1995, commercial trolley cars used the tracks between Penn’s Landing and Washington Avenue. The tracks are still visible on Columbus Boulevard in South Philadelphia. 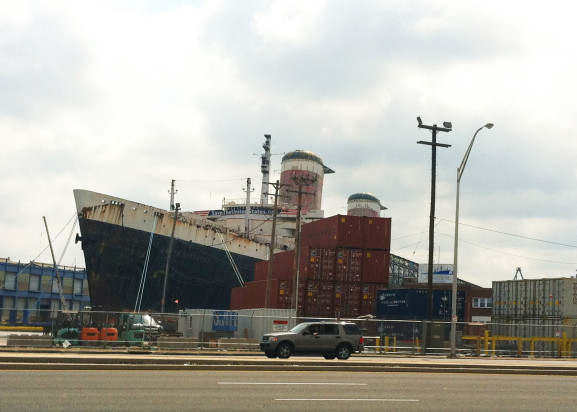 The SS United States was funded through a joint effort between the United States Navy and United States Lines, a shipping company. Construction was completed on the massive ship in 1952 by Newport News Shipbuilding.

She set the world record, and continues to hold the record, for fastest trans-Atlantic voyage. On her maiden voyage, she left New York and arrived in England 3 days, 10 hours and 40 minutes later. The demand for trans-Atlantic travel quickly dwindled, and she was put out of service in 1969 and brought to Philadelphia in 1996. Conservation efforts have been ongoing to save the ship from decay.

– Text and photos by Hayley Condon and Madeline Bates