In a low-income district also struggling with major budget cuts, the GEAR UP program’s goal is to increase the number of Philadelphia students that attend postsecondary institutions.

The highly competitive GEAR UP grant, which stands for Gaining Early Awareness and Readiness for Undergraduate Programs, provided a six-year grant to service seven high-poverty middle- and high schools in Philadelphia beginning in 2009. Starting at the middle school level, the program follows a cohort of students through high school and assists them in establishing a plan for postsecondary education. 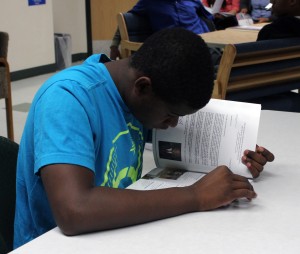 Thanks to a new grant announced in late September, the GEAR UP program in Philadelphia will receive $4.3 million each year for the next seven years. This will allow the program to continue supporting students beyond middle- and high school during their first year of college.

“The money will be used to support partnerships at the school level to increase the amount of resources that student have access to,” said GEAR UP program director Alexandria Robinson-Rogers. “Each school will actually have a partnership with a university, a local community organization and a corporate organization to support the goals of that school.”

The funds will also be used to provide additional assistance to parents, and for professional development for teachers, counselors and administrators surrounding college access and college readiness. 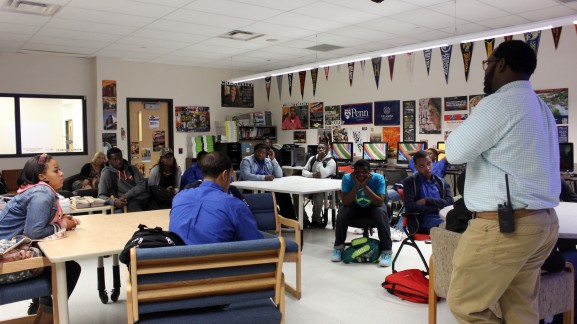 Marc Holley (above), the GEAR UP site supervisor at School of the Future, has worked with this year’s graduating class for the last six years. He followed a large group of his students when they were relocated to School of the Future from University City High School after its closure in 2013.

“I think watching the maturation of the learners going from sixth and seventh grade to 11th and 12th grade has been the most rewarding aspect,” Holley said. “Watching them, understanding them and really knowing them, because I was with them for so long, gives me an advantage over anybody else in the building that will potentially work with them.”

The GEAR UP program began in 1999. In addition to the grant awarded to the School District of Philadelphia, partnership programs and states nationwide received 41 grants totaling $82 million. The Department of Education estimates that these grants will help 116,000 at-risk students receive the support they need in their preparation for postsecondary education.

Education: Building a Future For Students Despite Budget Crisis

One of the Philadelphia Education Fund’s main goals is for all young people to have access to opportunity, not just the lucky ones. According to President and CEO Darren Spielman, the vision of the organization, which has been [continue reading…]

The School District of Philadelphia plans to close 23 schools in August–a decision aimed at saving money because of a $300 million budget deficit. The closures have affected neighborhoods throughout the city in a variety [continue reading…]