Arms outstretched, Conrad Benner leaned out over the silver railing that separated the Schuylkill Banks Boardwalk from the water below. Adjusting the frame of his camera to fit the distant Philadelphia skyline, the 29-year-old held, snapped and nodded.

Part of Benner’s grind as founder and editor of street art blog StreetsDept.com is sharing his perspective and passion for urban exploration, including public spaces like the newly opened 2,000-foot extension of the Schuylkill River Trail.

The 15-foot-wide boardwalk, and some thoughtful suggestions on how to improve it, was one of his most recent posts on the site.

Benner created the blog in 2011 to showcase his photos of local street art, exploration of abandoned sites and to promote public spaces. Today, the site receives thousands of views per day. 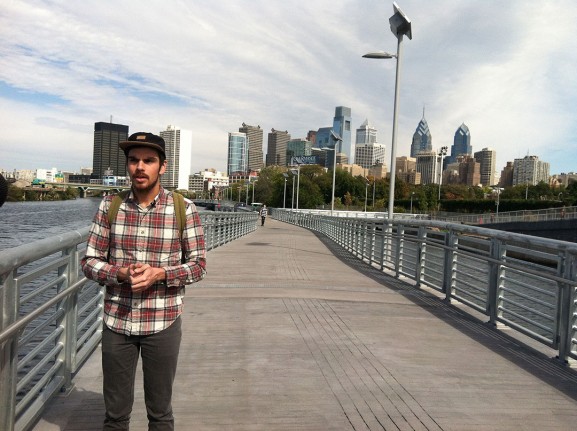 “Some photographers are content to shoot the view before them,” said Leah Kauffman, Benner’s editor when he freelanced for Phrequency.com in 2010. “Conrad seeks out beauty in the strangest of places. Abandoned buildings, alleyways, stairwells. It’s almost as if he has built-in sonar for revealing work that speaks to his audience.”

The success of StreetsDept.com most recently landed Benner a position at Quaker City Mercantile as a global community manager. Yet when he’s not at his day job, Benner fills his nights and weekends photographing and exploring forgotten and emerging city spaces.

Born and raised in Fishtown, Benner said he felt disconnected from the waterfronts until the city, behind the 2009 Master Plan for the Central Delaware, began developing the spaces into their potential.

“As a kid growing up in the city, we were always told that we would be connected to the waterfronts next year, or the next year,” Benner said. “It’s exciting that in the past few years, we do seem to be moving in that direction.”

Aside from appeasing residents by turning empty lots into scenic shores, Benner said spaces like the boardwalk give people of all backgrounds something to share.

“It’s a place to escape to,” Benner said, motioning toward bikers, joggers and walkers passing through the boardwalk. “It’s the middle of the day, middle of the week. It shouldn’t be this crowded here, but it is.”

Between the rivers, Benner uses the blog to promote all forms of street art and urban spaces that pique his interest. 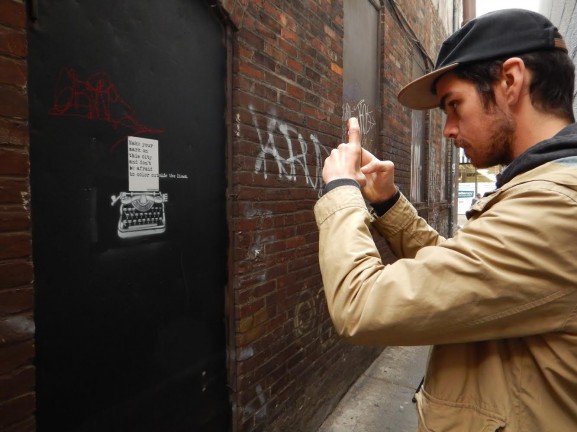 Hunting Park’s Tastykake factory, abandoned after a 2010 fire, was the subject of a 2013 post.

Benner and some fellow photographers braved the shaky foundation of the once-proud Divine Lorraine Hotel in 2012 and 2013. Since then, the property has been transferred to developer Eric Blumenfeld, with plans to convert it into apartments.

Seeing the physical melding of past and present is awe-inspiring, Benner said, and something to be taken advantage of.

“We’re at a weird point in our history,” Benner said. “We’re in between our industrial past and whatever our future is, and these are sort of the tombstones to that industrial past. So it’s really exciting to go in and see them while they’re still around.”

Philadelphia artist Jason Andrew Turner said his longtime friend has a unique eye for art despite not having a background in it.

“He sees beauty in things without the context of origin that cynics like me might miss,” Turner said. “He doesn’t overanalyze or get bogged down with all those superficial over-thoughts. He sees something, takes a photo, and shares it with anyone that’s willing to view it with his same wonder.” 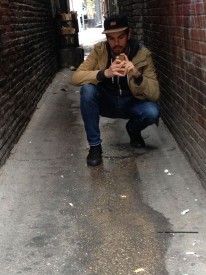 Part of that ability to share has been aided by an explosion of social media use in recent years. Benner had over 93,000 followers on Instragram at the end of October, and it’s not uncommon to find hundreds of likes on his photos.

“I always had a sense people were exploring these spaces,” Benner said. “We’re just seeing it now more with Instagram and Twitter and with blogs.”

Benner was one of the first bloggers Antoinette Marie Johnson considered in 2011 when seeking to grow blog traffic for NakedPhilly.com, a Philadelphia real estate site. Johnson said Benner was already developing a following on StreetsDept.com and quickly became one of the team’s most skilled additions.

“His stories about neighborhood development projects quickly reported the facts, but then narrated the background story in a way that stood out on the site,” Johnson said. 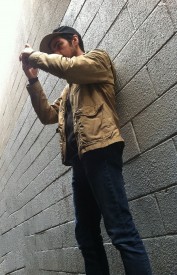 Ginger Rudolph met Benner at a panel discussion featuring local bloggers at Philly Tech Week in 2012. At the time, she was there to listen to the man behind “pretty much the only comprehensive blog I’d seen representing Philly street art,” said Rudolph, co-founder of community arts program HAHA x Paradigm.

When the program needed a photographer to document visiting artists’ work, Benner was first on the list.

“We needed someone who could make them feel at ease, someone that knew the city well, and really represented what makes Philly’s art community so special,” Rudolph said.

“Each one of them geeked out over the day they spent with Conrad traipsing around the city taking photographs,” Rudolph said. “His overall knowledge of the city and art scene give them a real sense of Philly.”

After following the blog just a few weeks after it started, Boruchow invited Benner along to document one of his outings in 2011.

“He’s very interested and engaged in what we do,” Boruchow said. “He truly has a real love for this city and its artists.”

Text and images by Nodyia Fedrick and Joe Dolinsky.

FORE! … Or Rather FIVE of Philly’s Best Public and Private Golf Courses

When you think of things to do in Philadelphia, golfing probably isn’t one of them. But fact is there are multiple public and private courses located within city limits. Whether you’re a beginner or seasoned [Read More]

If you manage to avoid sliding down the soggy slope that separates Wal-Mart from the uninviting, trash-ridden space that is Pier 68 in South Philadelphia, you’ll see a sign of things to come. Nestled between [Read More]

Juniata Park/Feltonville: Save a Life with the ACCT

The Animal Care & Control Team of Philadelphia, also known as the ACCT, is located between Second and Front streets. It welcomes stray animals and the help of volunteers, as well as donations to help [Read More]