While the School District of Philadelphia’s budget cuts have caused many schools to close, the problems brought unity to one West Philadelphia neighborhood. When Alexander Wilson Elementary School closed last school year, most students were sent to nearby Henry C. Lea Elementary School (below left). 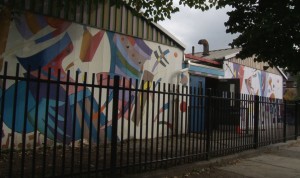 Although many people throughout Philadelphia have openly expressed their dislike of merging schools, the Wilson and Lea collaboration didn’t bring all negative reception to the neighborhood.

Lea Elementary is in the midst of creating an area that supports the environment while providing recreational space for the community. The combination of Wilson and Lea was a step towards achieving the friendly school environment the community strives for.

Wilson Elementary passed along its brightly colored play structure (top photo) along with most of its students. The Hamels Foundation and the Spruce Hill Community Association donated the playground to Wilson prior to its closing.

“Moving the playground added a lot to Lea,” said parent Tiya Mohammed of Walnut Hill. “Now [students] actually have something besides a cement block to play on.”

Not only did this bring life to the asphalt lot in the rear of Lea (below right), it created an unexpected addition to the Greening Lea project sponsored by the West Philly Coalition for Neighborhood Schools (WPCNS). 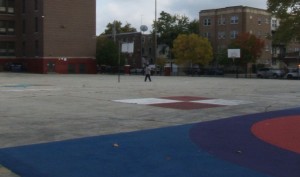 Greening Lea is an initiative by the WPCNS aimed at the beautification of Lea and to show it is more than just an asphalt lot in the community.

Julie Scott, of West Philadelphia, is a community member as well as one of the committee chairs for the Greening Lea project.

“I’m a neighbor and I felt like this was a really big opportunity to help this neighborhood school be as strong as a lot of the other schools in the area,” Scott explained.

The project started under the direction of Lea’s past principal, Sonya Harrison. It was catapulted with a pilot project on the side of the lot. The Greening Lea committee and community members created a green space, which contains a variety of plants and different types of trees (below). 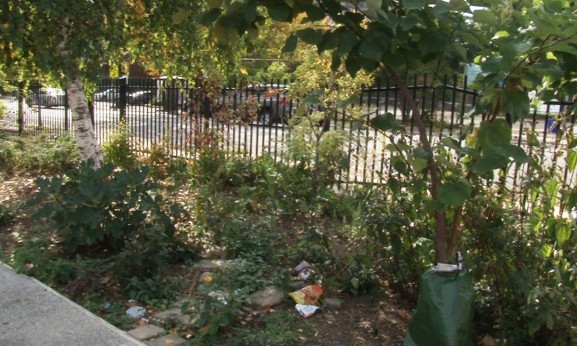 Since then, Lea Elementary has gained a new principal, Jennifer Duffy. This is Duffy’s first year as principal and she has been supportive of the Greening Lea initiative. Grants from the Philadelphia Water Department, PECO and a variety of foundations have been essential to the project as well.

While much has been done to beautify Lea Elementary, the project is not done yet. The WPCNS plans to have the entire Greening Lea project competed by the summer of 2015.

A van of screaming children pulls up to the curb. The children are anxious to get out and stroll through the red wooden doors of the National Temple Baptist Church, head down the hall and [Read More]

One similarity between Bainbridge Island, WA and Philadelphia is an experimental gift economy. Hyperlocal groups are based on the concept of helping neighbors by giving items one person no longer finds useful to others who do. These groups [Read More]