An ‘80s cult classic movie gave Shannon Drake one of her first ideas for Thank-a-Vet.

The therapist, who works with veterans in a Northeast Philly housing program, said she was talking to a veteran who was struggling with depression.

“He was talking about giving service to the country but then it was over and he kind of felt lost at the end of that,” said Drake, who lives in Old City.

Drake wanted to create a kissing booth for him, like the one in “Revenge of the Nerds,” so people could show their appreciation for his service. While the kissing booth never quite came to fruition, Drake has helped veterans in other ways through her organization, Thank-a-Vet. Drake’s father is a veteran, and her grandfather died fighting in World War II.

Drake noticed many veterans in the city’s housing programs had only one pair of socks, often wearing the same pair for months at a time.

“At night, they’re going back to their apartments and they’re washing them out in the sink so they’re ready to go in the morning,” Drake said.

Drake collected socks on her own before her mother suggested she start a website. Now, monetary donations for socks can be made at thankourveterans.org.

Thank-a-Vet is gearing up for its Sock ‘Em contest. From Nov. 31 to Dec. 9, people can drop off sock donations at the Independence Seaport Museum or collect them independently. Whoever collects the most socks will be given a “Heroes’ Hero” award. Sock pick-ups and drop-offs can be arranged with Drake by contacting her at thankourveterans@gmail.com. 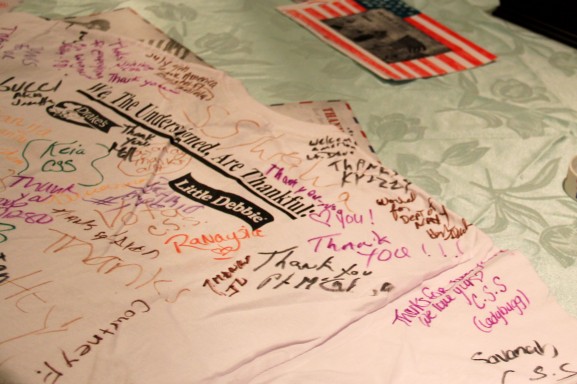 Thank-a-Vet also collects thank you cards for veterans, which Drake stuffs in sock donations when she delivers them to veterans. Drake said she is working with the National Constitution Center, where those interested in writing a thank you card can do so. 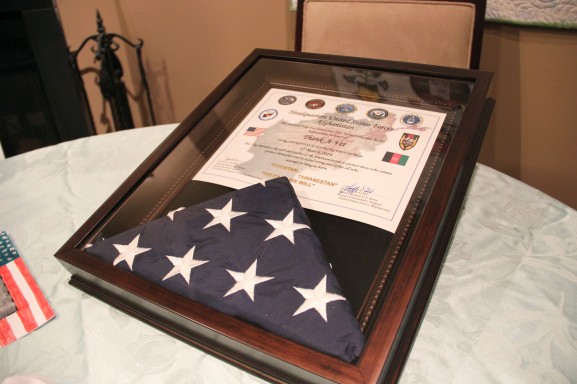 One of Drake’s prized possessions she received through Thank-a-Vet is a framed flag that was flown over Afghanistan in honor of Thank-a-Vet.

“That really meant a lot to me,” Drake said.

Through all of Thank-a-Vet’s initiatives, Drake said she wants to keep it personal and inspire appreciation rather than sympathy.

“I called it Thank-a-Vet because I wanted to raise goods in the community in the spirit of gratitude instead of pity,” Drake said. “I know a lot of programs, they inspire kind of the pity feeling for veterans because of the dire situation that most of them are in. And really, we should just be grateful for the freedom that we get to enjoy everyday.”

On the door to Room 127 on the ground floor of City Hall, the “5 p.m.” closing time sign is peeling off. Scott Brown, director of the Veterans Advisory Commission, leads the agency established by [Read More]

This post is part of a series covering an educational trip planned by University of Pennsylvania students for the men and women enrolled in the Veterans Upward Bound program. You can find more information here [Read More]

Germantown: Feeding the Spirit and the Stomach

Speaking with someone who is passionate about something is a great experience. Take Paul M. Jones, who directs the food program at Victory Community Baptist Church of Germantown, as a prime example of that. He [Read More]