Philadelphia is a city full of historical places to see, restaurants to eat in and museums to visit. Many of these locations can be found in Chinatown, making it a destination for tourists and city residents alike.

Although it is a popular area, some tend to avoid it due to problems with traffic and parking.

The Philadelphia Parking Authority issues thousands of parking tickets each week and has the technology to know if you are parked beyond the meter limit within moments of your time expiring. In Chinatown, this is a common occurrence when visitors park their cars to eat at restaurants.

Recognizing a need for a better parking alternative, the Philadelphia Chinatown Development Corporation partnered with the PPA and came up with the idea for validated parking. 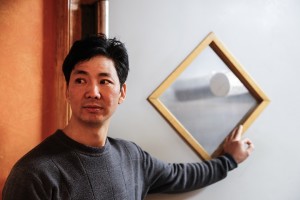 In this venture, customers of two Chinatown restaurants – Xi’An Sizzling Woks and Sang Kee Peking Duck House – and the Asian Bank can park in the Autopark at Gallery Mall, above, make a transaction at one of the given businesses, and receive a voucher for $3 off the parking fee.

Xinping Wang (right), owner of Xi’An, believes that it benefits his business.

“I really feel that the validated parking brings more customers to the restaurant because parking is cheaper,” Wang said. “Customers worry about getting tickets if they park on the street.”

The mission of the PCDC is to preserve, protect and promote Chinatown as a viable ethnic, residential and business community, which led to them implementing the parking program two years ago. Ping-Ho Lee, program manager of PCDC, encouraged businesses to participate. 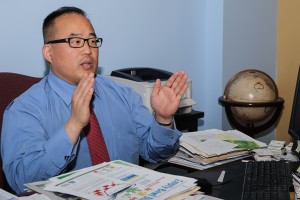 “This year we did a pilot program with two local businesses that wanted to participate (Asian Bank and Sang Kee), and then Xi’An showed interest,” Lee said. “We’ve received calls from other businesses that are interested in this program, and we are working on planning our next step.”

In recent years, Chinatown has seen many of its restaurants change ownership and new restaurants have opened. People from different Asian countries have moved in, with new housing projects being built within both Chinatown and the Loft District. David Oh (left), Philadelphia Councilman At-Large, said these changes may have an effect on parking.

“I think the business community is dealing with increasing costs and a changing demographic,” Oh said. “For folks who surround Chinatown, they’re looking at the condominiums and residential lifestyles which can conflict with traditional restaurants that have customers coming in and occupying parking spaces.”

Although PCDC has played a large part in the creation of some of the new housing projects in Chinatown, many of the restaurant owners feel that the area already has limited space to grow and worry that the competition from places like Reading Terminal Market and other Center City restaurants will be too fierce.

“Property is a big factor because there really is no more property,” Poon said. “It’s limited because people want to come here to do business. But our Asian community supports PCDC and what they’ve been trying to do for us.”

PCDC recognizes that these restaurants and businesses need assistance, so they use their resources to reach out to customers and let them know that both they and the PPA want them to continue coming to Chinatown and want them to be satisfied with parking locations.

“We’ve increased our outreach strategy by creating brochures, posters and flyers for distribution,” Lee said. “We’ve also educated the local businesses on how to promote this program to benefit themselves and their customers.”

“We have our own discount in a non-PPA owned lot,” Phung said. “We give $1.50 off of lunch and $2.50 off of dinner if you park there. We’re in the city and it’s hard to find space but we want people to come and eat here.”

Although not many customers are aware of the parking discount, they say that anything that would improve the current conditions is something worth supporting. Hiya Ray, a student at Temple University, has gotten parking tickets in Chinatown but still frequents the area.

“I went to traffic court in Chinatown to fight a ticket I’d gotten elsewhere and was late to my meter by two minutes,” Ray said. “Even though I was parked in a traffic court parking spot, I got a ticket. But I’d definitely go to eat there a lot more if I knew I could park somewhere right away.”

Restaurant owners in Chinatown want to bring in as many customers as possible – not only so they can make money and ensure that their business thrives, but so they can share a small part of their identity with Philadelphians.

Chef Poon has seen an influx of people from Vietnam, Thailand, Malaysia, Singapore and Japan, and he hopes that people can experience the different aspects of Asian culture that they have brought with them.

“More people will come if parking is cheaper and convenient and that’s what we want,” Poon said. “We bring together all of our cultures and expose them to Americans. That’s why we’re thankful for this parking venture. Now more people will come to Chinatown.”

The different types of restaurants, shops and boutiques on Germantown Avenue underline the fact that Chestnut Hill has plenty to offer for everyone no matter what their background may be. For example, people who enjoy […]

Several new restaurants, including Dim Sum Hand Drawn Noodle, Szechuan Dim Sum Restaurant and Hippot Shabu Shabu, launched in Chinatown after this past summer. The area is undergoing a transformation with an influx of immigrants and […]