Not to be confused with the Argentinian sauce Chimichurri, the Dominican Chimichurris is an after-party must. Originating in the Dominican Republic, the Chimi is a burger-like specialty sold out of panel trucks in corners of concentrated areas generally surrounded by nightlife and businesses.

The Chimi is a tropical twist on the conventional American hamburger. It replaces the usual lettuce and tomato with cooked cabbage, herbs and spices. Here are seven places you can get freshly made Chimis. 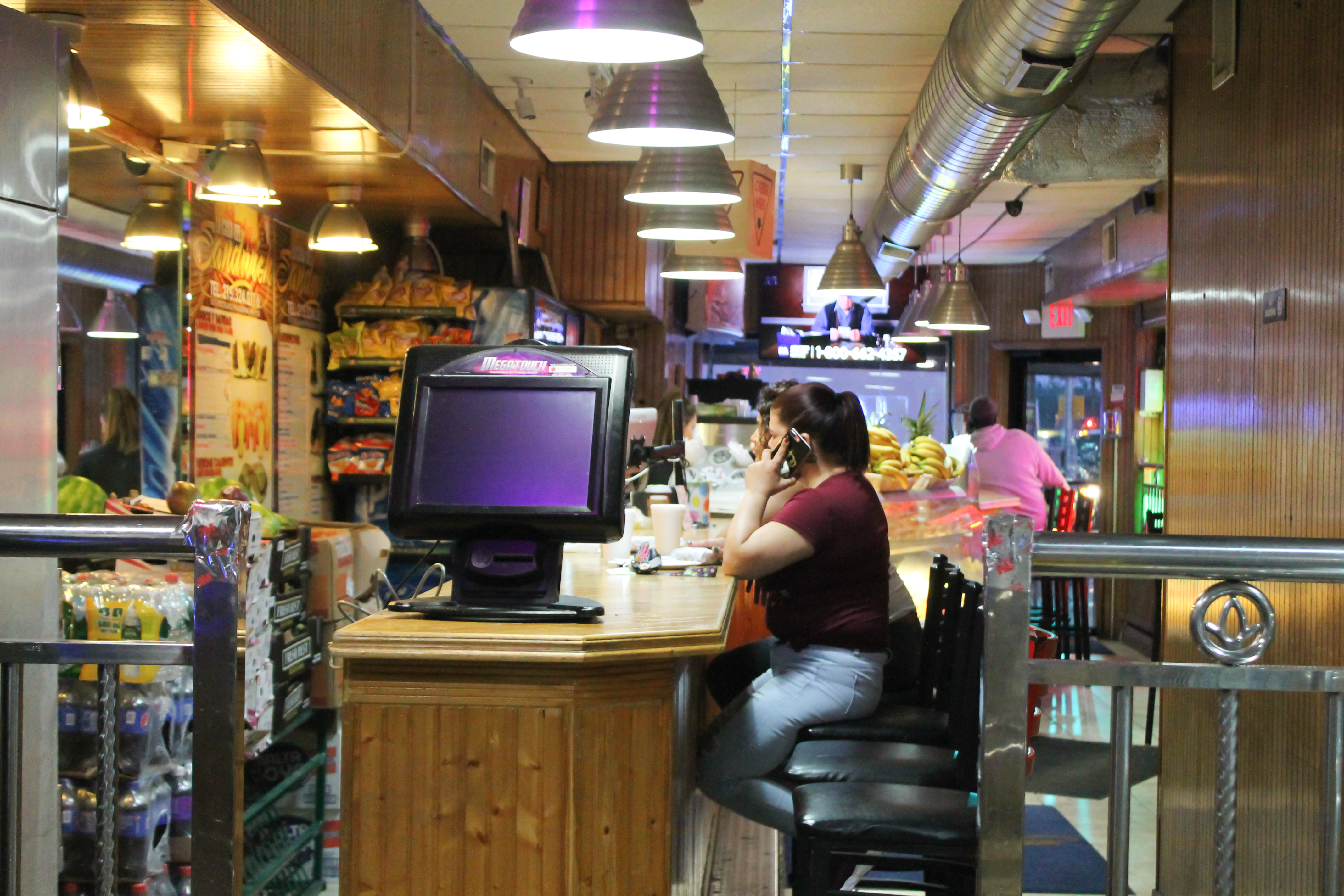 Located among a plethora of small businesses such as, laundromats, ice cream shops, hair salons and others, La Casa del Sandwich offers its customers a wide variety of sandwiches including chicken, steak and pork Chimichurris. Unlike other places, La Casa del Sandwich has its own establishment where customers like Derrick Whitening can grab a bite after going to the barbershop just around the corner and enjoy one of the many freshly made juices.

“The steak is real,” Whitening said. “The meat tastes grilled and not all chopped off.” 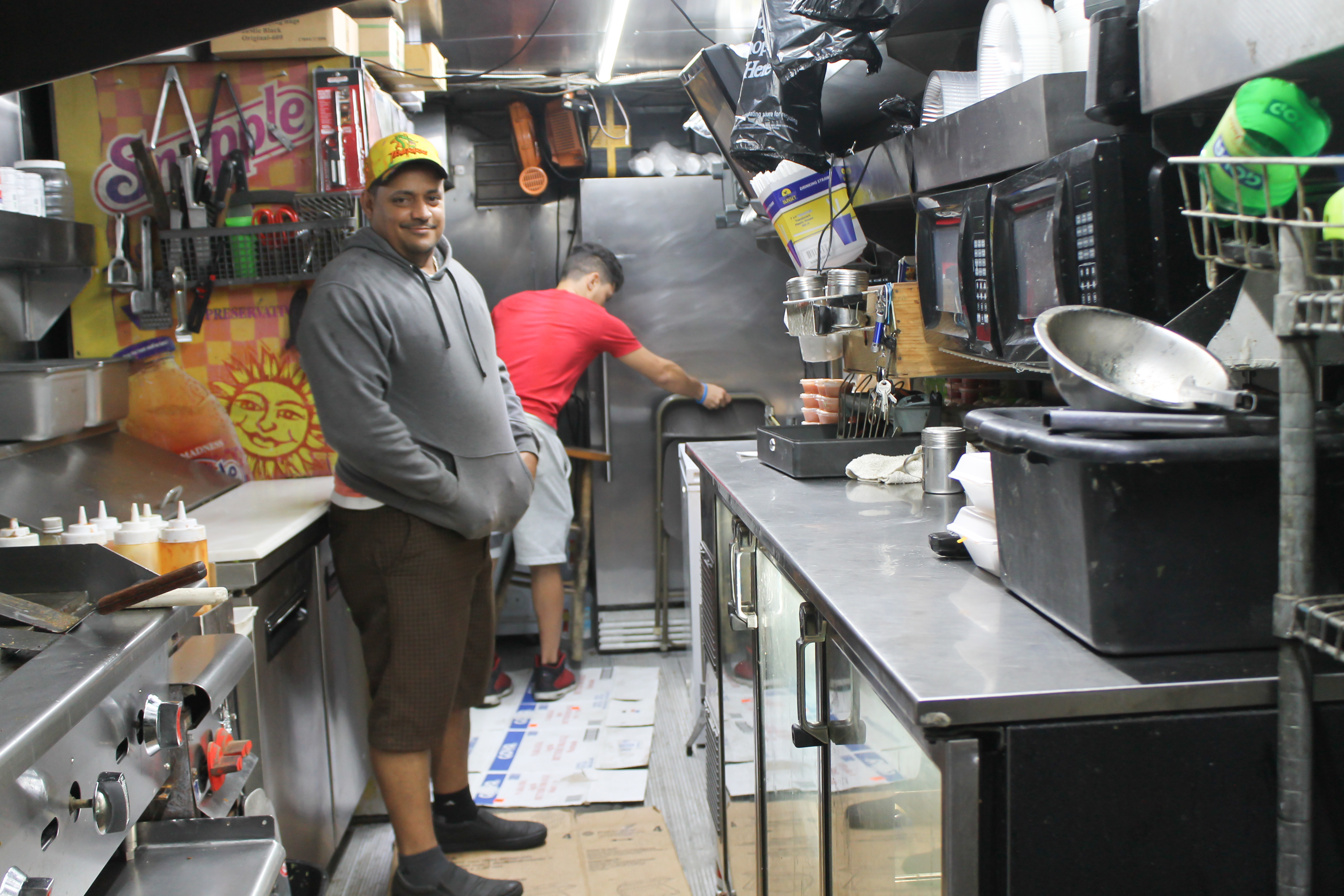 Just months away from their four year anniversary in the business of fried foods and Chimis, Delicias Dominicana has established itself in the community as “el sazón de Filadelfia” (The seasoning of Philadelphia).

For the owner Jose Lora, the main ingredients in a Chimi are the lettuce and the meat – which he seasons by using a family recipe brought from the Dominican Republic. Lora believes his seasoning is what sets him apart from other Chimi spots. 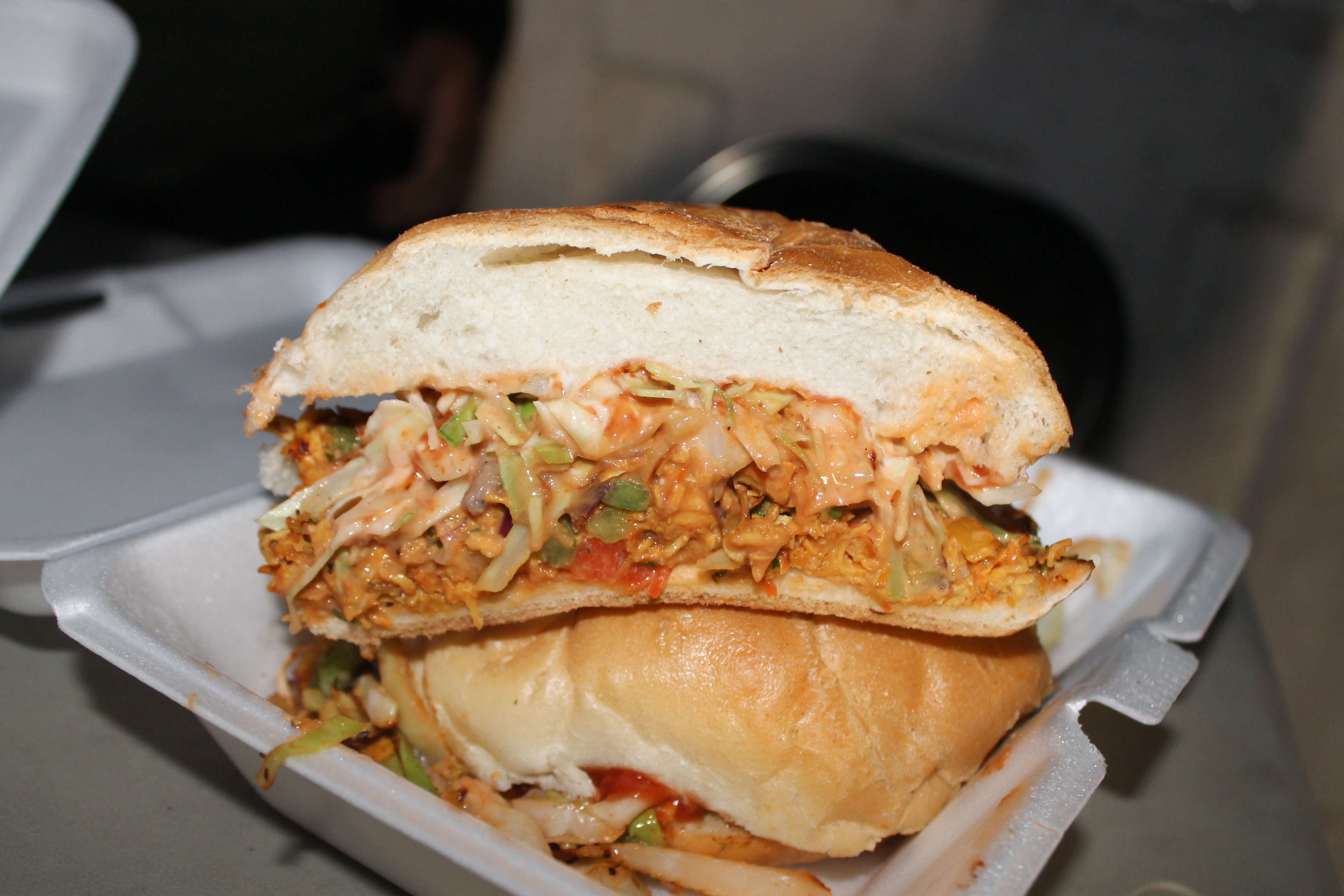 Although El Zurdo means left-handed, Ramon Mezquita is doing everything right when it comes to Chimis. His seasoning and ingredients have established his business as one of the best options among his clientele.

“Although others put the same ingredients on their Chimis,” Mezquita said, “it doesn’t taste the same because I have my own tricks and secrets.”

Unlike other trucks, El Zurdo has two options in its menu that makes it stand out from others. Between these two options is the Chupamino which is the same as a Chimi with the difference that the cabbage is cooked mixed with the meat, and instead of bread it has tostones (fried plantains). The other option is the longaniza (sausage) Chimi, which is an is uncommon ingredient in Chimichurris.

“For me, there’s no uncommon ingredient as long the customers are satisfied,” Mezquita said. 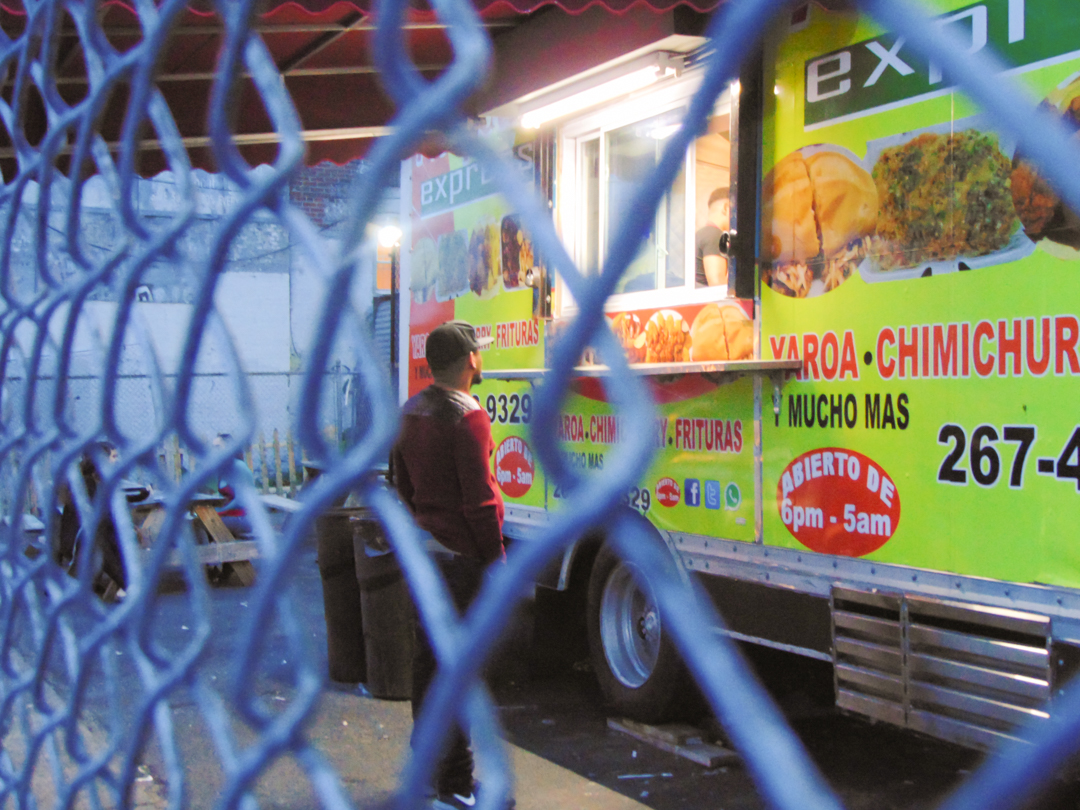 Pica Pollo Express is a Dominican food truck right down the street from Colombian restaurant, Tierra Colombiana. Carolina Gomez and her husband decided to place what is now the family business at 4600 North 5th Street, because they realized there was a dire need in the community for a business like theirs. They recall how three years ago there were only two trucks that selled Chimis, Yaroas and other late night treats.

“If you realized we don’t have a full detailed menu outside, that is because most of our customers are frequent and know what we offer,” Gomez said.

Pica Pollo Express is currently getting ready for their busiest time of the year –  summer. Most of the clients are young people, who tend to visit the truck at night after a day at the park, river or the beach. 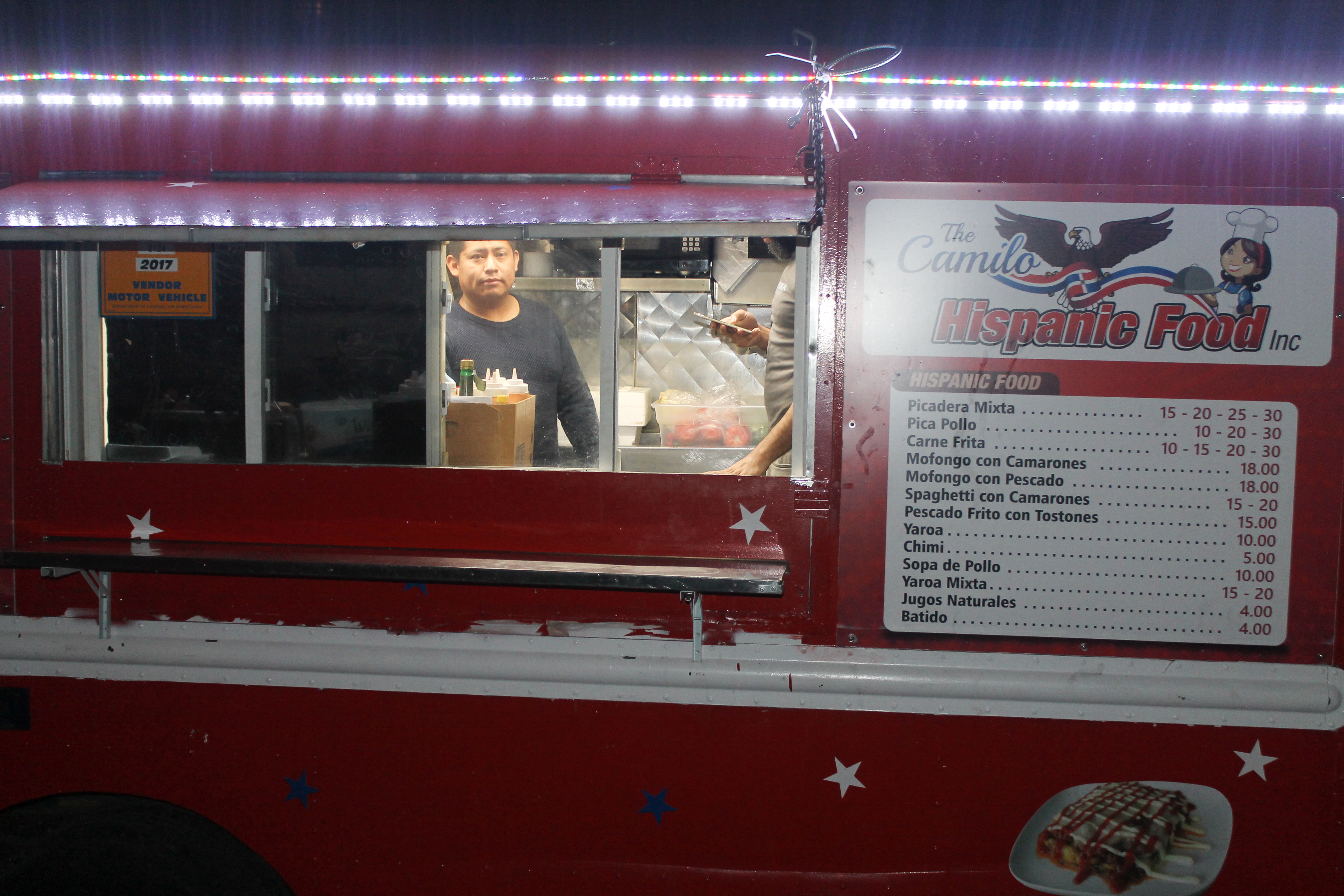 The Camilo Hispanic Food truck is a new business around D Street and Wyoming Avenue, and it has been open for four months. The truck is located among other small businesses such as restaurants, hair salons and bars.

They serve a wide variety of finger foods but the kind of chimis they offer are chicken, beef and pork. The weekend days are the times that they sell the most, usually starting around 3 p.m..

Alberto Selereo, better known as “Nacho”, opened the truck with his wife. Selereo is from Mexico and hopes to come up with a fusion Chimi in the future. 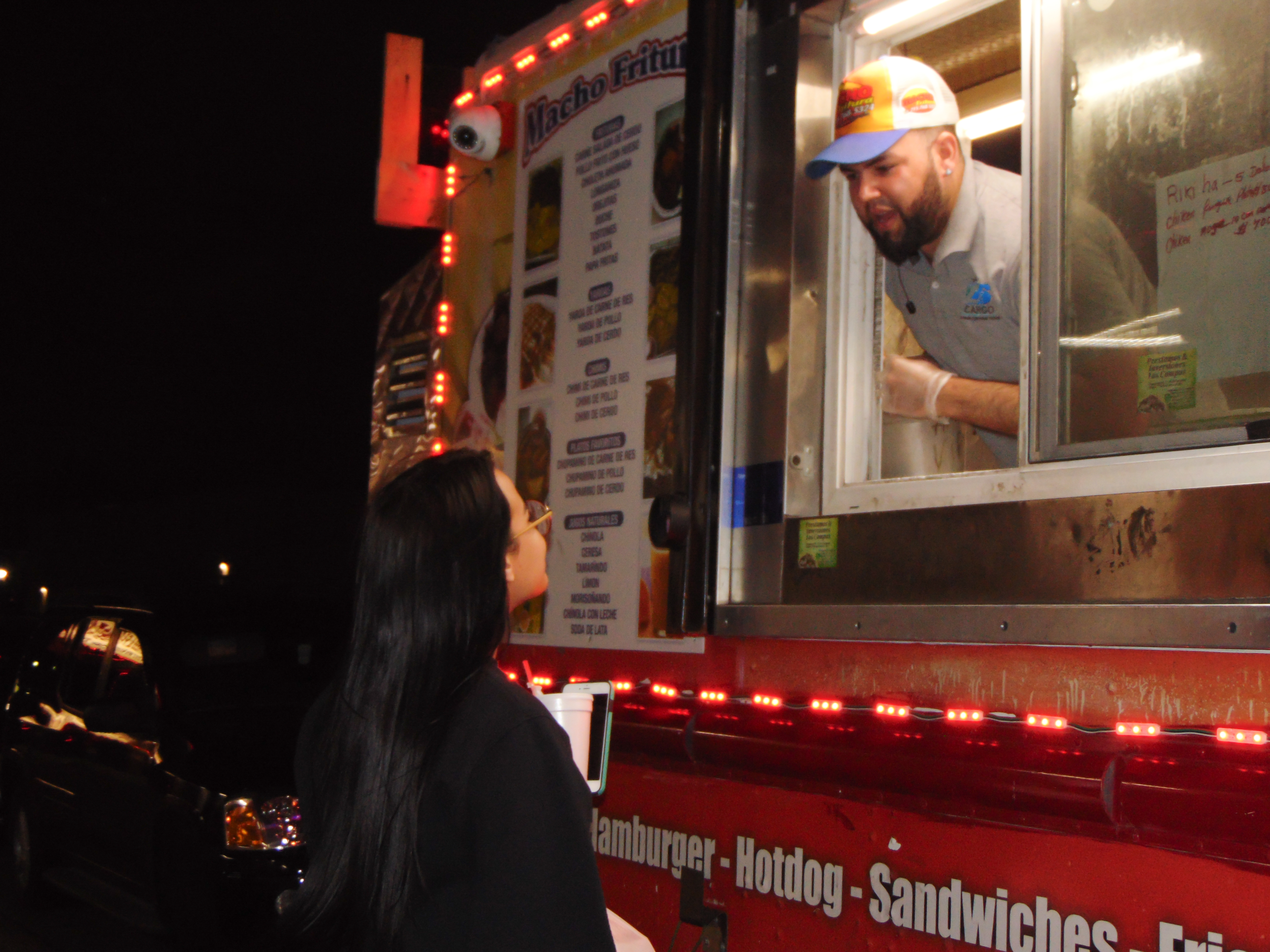 Dominicans in Juniata know precisely where to go after a dominoes match. Just down the block from La Nueva Casa De Espana Night Club on Whitaker Avenue, the Macho Fritura truck serves their Chimi until 3 a.m on weekdays and 6 a.m on the weekend. Its closing hours makes this particular truck different from many food stops.

Co-owner Andrea Rodriguez opened the business a year and a half ago, and has serviced clients of all ages and backgrounds since.

“Our seasoning is different from others,” Rodriguez said.  “An authentic Chimi needs meat, cabbage, mayonnaise and ketchup.”

For this truck, the meat preparations take place in the early hours of the day as they season their meat with their secret ingredient. 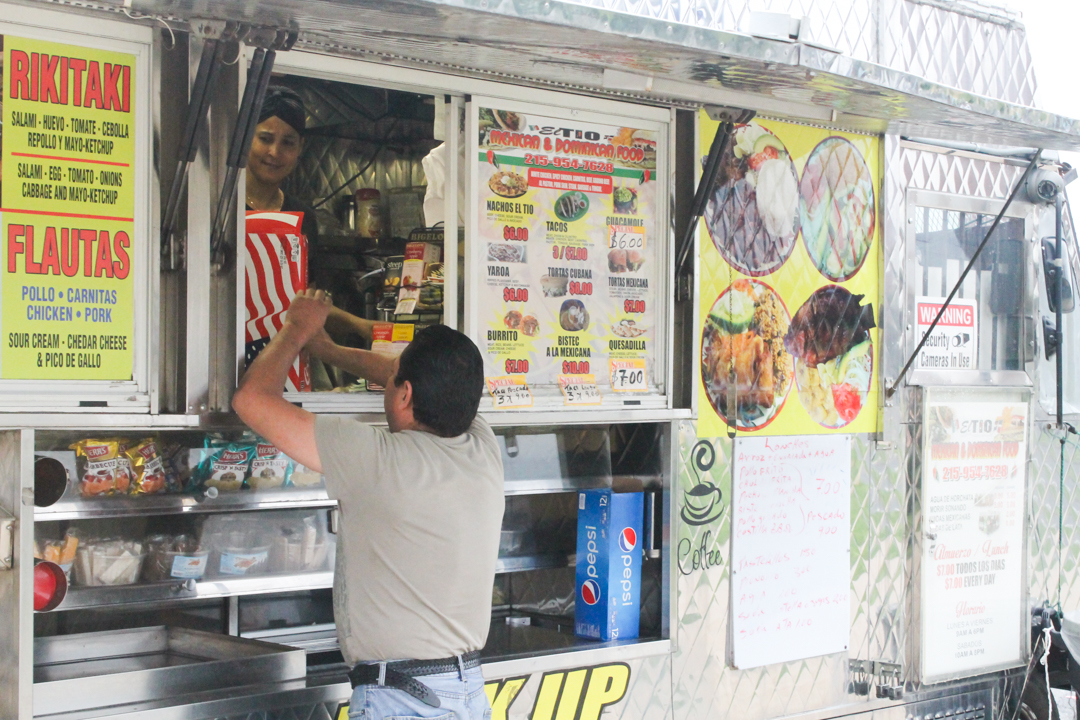 Mexican native Eduardo Razo opened his truck four years ago. While the general types of Chimi’s include chicken, pork and beef, his Chimis are made with steak. However, that’s not the only difference with his truck. Catering to the office workers coming from organizations like Congreso, his truck is open from the morning until the afternoon, unlike other trucks that open in the night.

Placed on American street by its intersection on Lehigh Avenue, his truck provides a Mexican-Dominican fusion that is representative of his own bicultural family. Aside from the usual Dominican finger foods, truck-goers can also enjoy authentic Mexican tacos, burritos and freshly made guacamole.

In a community riddled with drug and gun violence, “positivity” isn’t the most popular term when walking through the streets of Hunting Park. These five individuals are trying to change that.   Donavon Harrison is a [Read More]

https://vimeo.com/69121007] Helping Hand Rescue Mission has given homeless and impoverished people within its community a chance to revitalize their lives through religion and its services. Located at 610 N. 6th St., the mission offers Thursday [Read More]

Plans to revamp the Queen Lane Apartments, vacant since 2011, are making progress after a series of setbacks slowed the project. According to the Philadelphia Housing Authority’s website, an archaeological survey of the site concluded last [Read More]