Being a teenager in high school is complicated, but being a teenager in a Philadelphia public school can been even more challenging. Trying to juggle classes, homework, a personal life and then college applications on top of it all can be difficult without proper guidance and counseling.

“My counselors became more like mentors and people who helped me when I had a question about my academics, tutoring or extracurricular activities,” said Amira Dublin (below), a student in her senior year attending Northeast High School. “I feel as though my counselors were really, really helpful. I probably wouldn’t have made it to my senior year without them.” 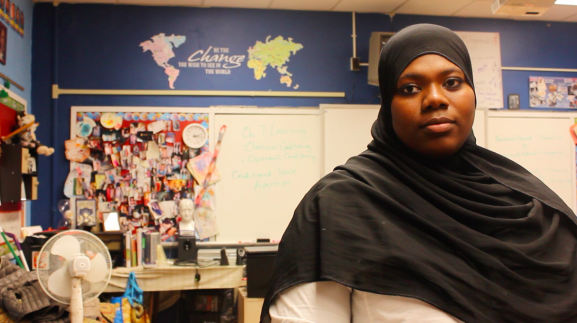 Some students aren’t as lucky. For example, George Washington High School in Philadelphia has 1,800 students and one counselor. Compared to Plymouth Whitemarsh High School in Montgomery County’s Colonial School District, which has six counselors for 1,600 students, the contrast is stark.

“No matter how hard the George Washington High School counselor works, there is no way he is going to be able to see every single student during the school year,” said Anthony J. Hopkins, Public Citizens for Children and Youth’s (PCCY) communications director. “And so what happens is that kids end up losing.”

One counselor with 1,800 students will inevitably struggle to make a decision between prioritizing a student with behavioral issues over stacks of recommendation letters waiting to be approved and sent off to hundreds of colleges, he said.

“Who wins in that situation? No one does,” said Hopkins. 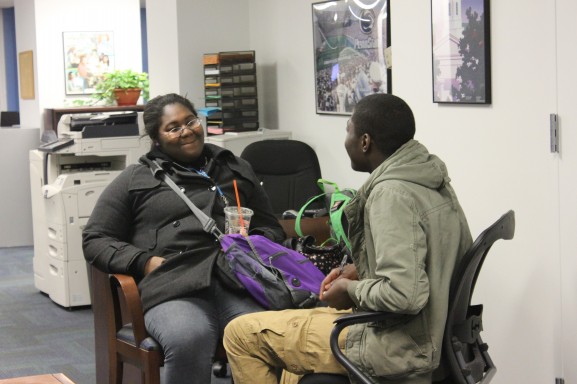 The 2014 school year began with deeper cuts within the city’s school district as the state legislature kept parents, students and district staff members waiting for a decision to pass a $2 tax on cigarettes. According to data from the School District of Philadelphia, the doors opened with 6,321 fewer staff members since the 2010-2011 school year, which included 406 fewer counselors.

“You have children sitting in a classroom trying to better themselves,” said Dublin. “It’s not fair that we don’t have the finances or the counselors that students need.”

Lacking Support Where It Is Needed Most

In 2013, school shutdowns in Philadelphia led hundreds of students to merge into schools that were already struggling under budget cuts. Counselors who were burdened became even more so after staff cuts and the influx of new students.

“Every school district has seen an increase of the number of children in poverty,” said Donna Cooper, the executive director of PCCY. “Those children come to school with greater needs. The sheer number of children with need is greater than the traditional funds can support.” 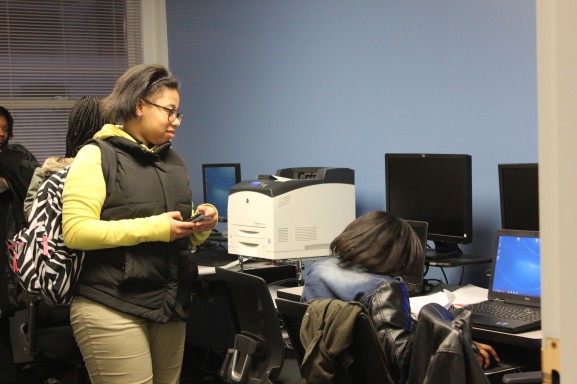 Philadelphia is the city with the highest deep-poverty rate in the country, and 36 percent of the city’s children live at or below the federal poverty line. Schools and counselors often take on an important role for students struggling and dealing with violence, food insecurity, disability and unstable home situations. Budget cuts to the public school system primarily affect the poorest students the most.

“What we need is a fair funding formula where you distribute the money where it is needed most – to the school districts that have high concentrations of poverty,” said Hopkins. “Research shows that the poor students are the ones that need the most support in order to meet the state standards for testing. If we get that, then we can start to afford more counselors, more support staff and, ultimately, we can really build up our children.”

Organizations like PCCY, the Public Interest Law Center of Philadelphia (PILCOP), students and parents have been actively calling for the state Legislature to create a fair formula for distributing education aid. Pennsylvania is one of three states without one.

“The way we currently do it is basically, if you have a friend in the governor’s office or if you have a friend in the state Legislature, that is where you are going to get funding,” said Hopkins. “A community that has a well-respected legislator who is in Harrisburg can say, oh, you know what, I’m going to get a couple million dollars for my district. They can make that happen unfortunately, and that is how it is.”

At Northeast High School, Dublin said there are 10 counselors for over 3,000 students, though officials did not immediately confirm that figure. The students see a counselor assigned to their grade and then they are divided into sub-groups. With those numbers, each counselor has more than 300 students under their care, which is still a large number compared to Plymouth Whitemarsh High School’s estimate of 266 students per counselor.

“People might look at counselors like they are just counselors and not teachers,” said Dublin. “Counselors really make a difference within a high school. This is their job – they are there to give you guidance, help you. They are there to be parents when your parents aren’t there.”

Nonprofits like Philadelphia Futures are trying to bridge the gap through after-school college prep workshops for students who want to attend college but lack the tools and access to a counselor.

On one recent day, about 27 high school juniors sat with stacks of paper in front of them carefully listening to Danielle Kaiser, the College Connection coordinator for Philadelphia Futures (below). Many of the students are the first in their families to attend college, and the nonprofit helps them prepare for the path to and through higher education. 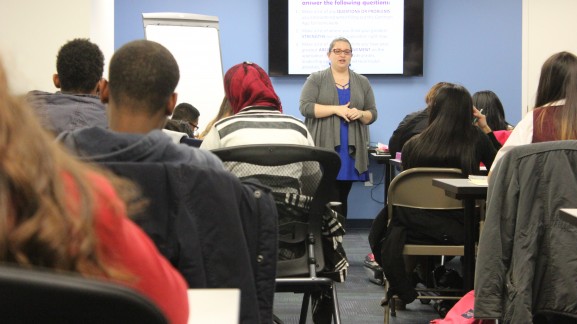 “Families and parents are finding themselves being in the role of college guidance counselors more so now than counselors can allow themselves to be,” said Thom Butler of the Philadelphia College Prep Roundtable. “So now where a counselor used to focus on college, they have to focus more on the other counseling elements: social, behavioral issues of a school.”

For some students, navigating through high school and into college isn’t obvious without the help of a counselor. There countless forms, entrance tests (some of them with fees) and complex financial aid forms. The path towards upward mobility is hindered by lack of fair and adequate funding which puts an entire generation of students at risk of staying in poverty.

“The funding of public schools is a failure by almost every criteria: equity, adequacy, predictability and fairness,” said Michael Churchill of PILCOP. “Preparing a student and funding can vary from $9,000 to $27,000 a year, which is a quarter of a million [dollars]difference over 12 years.”

Creating further tensions are misconceptions like Philadelphia residents pay less in property taxes than their suburban counterparts, which explains why the city’s schools are underfunded. However, data shows that Philadelphia homeowners pay almost twice as much than a homeowner in the Colonial School District. The disparity in taxes and public education funding only exacerbates tensions throughout Pennsylvania, with students carrying the majority of the burden.

“Depending on where you live, you might have a school that is great, has everything that you need,” said Hopkins. “Or you go to a school that has literally nothing, and you are more or less getting your basic education stuff and then you’re out the door – and hopefully you can get into a college somehow on your own.”

News reports over the past six months have reflected the unrelenting problems that Philadelphia students and teachers face regarding layoffs and school closures. The public isn’t often shown the effects of the additional staff cuts, which affected counselors, nurses, aides, janitors and receptionists. Each role is vital for the functioning of a school and Philadelphia students have been left with the very bare bones of their schools.

“Counselors, they are the glue in a school. They are what connects the students to the administration and teachers, they are the ones that can identify issues and say, ‘I think we need to have an assembly’ or ‘I think we have to sit down and really talk about this,’” said Hopkins. “It is the counselor that is going to make that happen. You take that away, then you’re going to have more problems.” 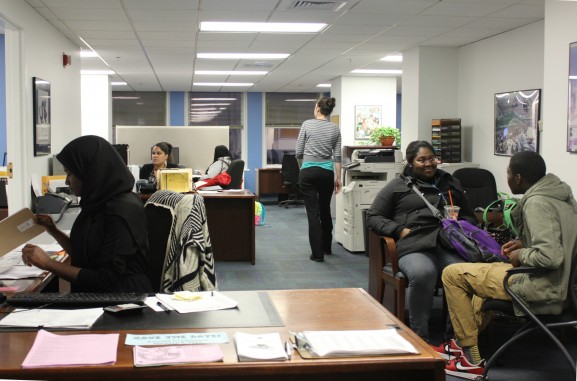 Teachers and principals are struggling with growing classroom sizes, far less equipment, fewer supplies and less support staff, and they are not adequately trained or paid to take on the role of being counselors or nurses. Nor can they help every student with the psychological, emotional and academic needs that counselors are trained to provide.

“I feel as though counselors make the school, because they give you that emotional support as well as the academic support – and we really need it,” said Dublin. “And we also need to figure something out with the budget cuts because we need our education, and our teachers need us just as much as we need them.”

Education advocates say the election of Tom Wolf as governor brings hope for change within public school districts in Pennsylvania. For now, challenges remain for the thousands of students left with little help as they wait for their college acceptance letters this winter.

– Text, images and video by Lara Witt and Lindsey Murray

Germantown: Fear of Blight and Vagrancy Will Come With School Closure

[vimeo 69047802] The closings of both Germantown High and Robert Fulton Elementary School pose a serious concern to the community; residents fear the block becoming vacant in the heart of central Germantown will have a negative [continue reading…]

As an education institution for city children through the past century, George W. Childs Community School has served as a staple in the Philadelphia School District.  The school has a proud history of successful, diligent [continue reading…]