Philadelphia is home to more than 3,700 murals, according to the Mural Arts Program. Several of these colorful, detailed works of art are spread across the exterior of buildings throughout Germantown. Some are visible from the community’s bustling Germantown Avenue, while others are tucked behind buildings on side streets.

The subject matter of the displays reflects the community’s life and history.

“It’s all about community!”

The “It’s all about community!” mural (above) was the result of collaboration between the city’s Department of Behavioral Health and Intellectual Disability Services, the Mural Arts Program and the local community. The mural, located at 5526 Germantown Ave., was dedicated in 2009 and depicts people with and without varying disabilities coming together. 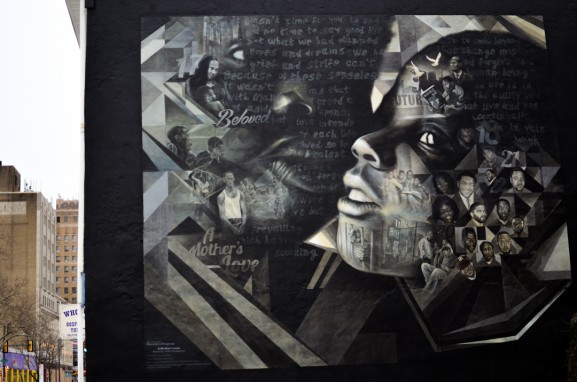 After hearing the story of Karen Bethea, who lost three sons to gun violence, companies and organizations from around the world sponsored the project. The mural was intended to spark a conversation about violence among young people and to help them understand that crime and violence are not to be viewed as normal. 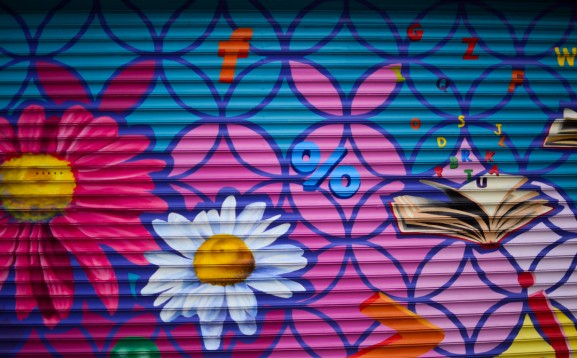 While not a traditional mural, Acclaim Academy transformed its roll-up door into a work of art.

Acclaim Academy, located at 5615 Germantown Ave., is an early childhood home for infants through pre-k. The school’s three brightly colored doors stand out and bring a vibrancy to the street. 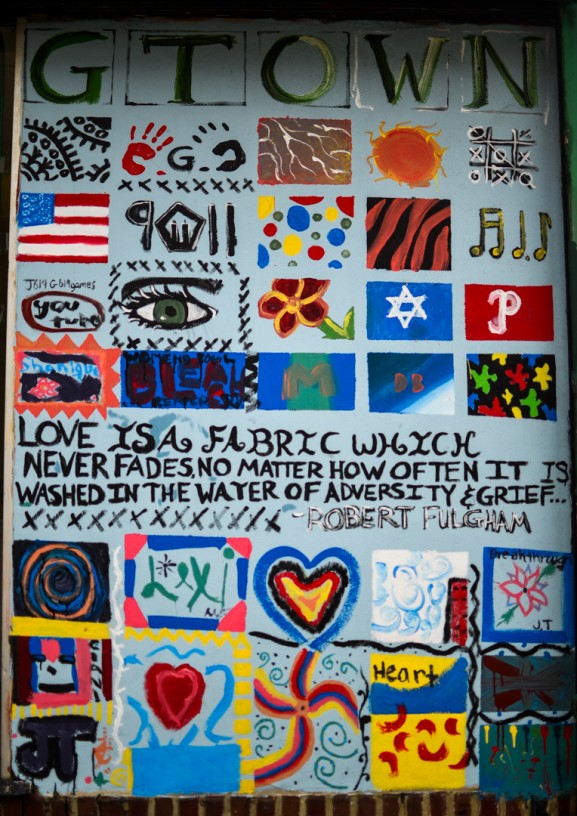 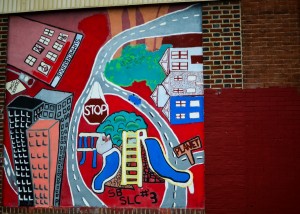 On the sides of Gaffney Fabrics, located at 5401 Germantown Ave., are two murals (above and right). Both are community oriented, filled with icons of Philadelphia and Germantown, as well as those representing the cultural and religious diversity of the area.

Within the mural on the store’s front face is a quote by Robert Fulghum, which reads, “Love is a fabric which never fades, no matter how often it is washed in the water of adversity and grief.”

The fabric shop, owned by Joe and Lenore Gaffney, has called this corner of Germantown home since 1978. 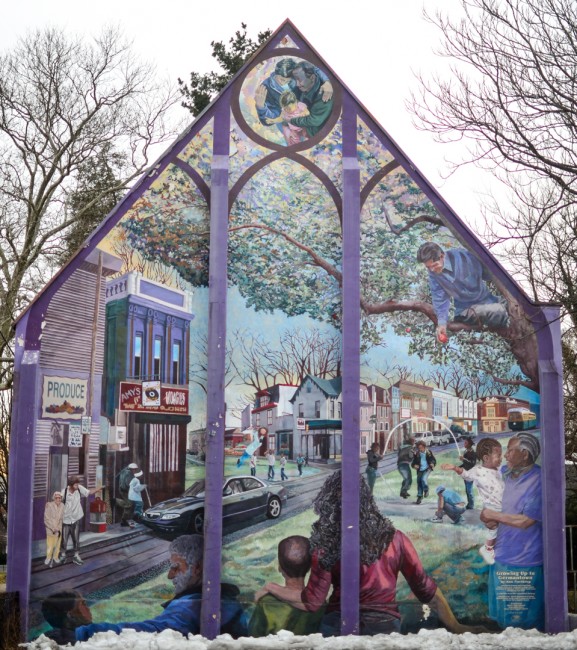 “Growing Up In Germantown”

Depicting a scene of community life, “Growing Up In Germantown” was a collaborative effort of artists Ann Northrup and Diana Gruberg, as well as artists from Center in the Park, Germantown High School, Pennsylvania School for the Deaf, Philadelphia Youth Corps and the Mural Arts Program.

This ground-to-roof mural is painted on the rear side of Mount Tabor Church, located at 110 West Rittenhouse St., and is viewable to those in the adjacent Vernon Park.

– Text and images by Jared Whalen and Lauren Dunn.

Just last year, at the intersection of Chew Ave and Washington Lane, there was only a large vacant lot. Now, there is a supermarket in its place. After months of construction, a new Bottom Dollar [continue reading…]

Philadelphians pursue health and wellness in a variety of ways. Trends come and go as people try new things and officials implement new laws to help keep people fit. Here are a few things you might not [continue reading…]

Face to Face is a non-profit organization where anyone is welcome to a hot meal, legal advice and an array of social services, all free of charge. What originally began as a soup kitchen in [continue reading…]