If there’s anyone who knows their community like the back of their hand, it’s Anton Moore. Born and raised in Philadelphia, Moore founded his own non-profit, Unity in the Community, as a way to give back to the neighborhood that he loves. With a strong team working alongside him to reach out to the underprivileged and to address issues in the community, Moore said that he isn’t taking any breaks to push for the change that he wants to see in South Philly.

When you first got the idea for Unity in the Community, was it your idea?

It was my idea. I said, ‘We should start an organization.’ It started off with our annual block party where we feed the community and have live entertainment and gather in unity. From there, we laid out these different initiatives that we do throughout the year and also to engage in mentoring and also helping out the community with different issues they might have.

Do you have a building that you work out of?

Oh, no. We don’t have a building just yet. It’s more so based out of a little office in my basement where I work from. But we’re actually working on getting a building. 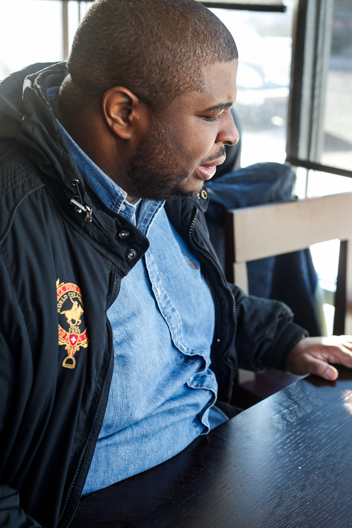 As of now, how many members are on your team?

Was growing up [in South Philly] your influence in creating Unity in the Community?

Growing up in Tasker home projects, you know, my mom had five kids at a young age. One of the things about that is when you grow up in a single parent home, there’s not a lot to go around. You think about less fortunate kids in the community but also you’re less fortunate yourself. But you know you’re able to make with what you have and are able to work it out. I always said to myself, whenever I get into a position where I can help neighbors, I’m going to do that.

So you said this all started with a block party?

Yeah, our annual Unity in the Community block party. This year is our 8th annual block party. First it was the block party but then we turned it into our annual Peace Week. So it’s a week of different events and that lead up to that big block party. We have different local and national celebrities come to preform free of charge. Meek Mills, Jazmine Sullivan, Angela Simmons, DJ Diamond Kuts, basketball players. It’s a lot of people.

How do you get all of these contacts?

Well, I started in radio when I was 16 years old as an intern at Loriane Ballard Morrill. Then, after my radio career from 16 to 19, I ended up interning in New York at BET. Then I was managing a local DJ named DJ Diamond Kuts. So, doing all these great things, you know, builds those contacts allows to network with a lot of people. In addition to that, I’ve done some community work with the president of the United States. I helped him come here and got a DJ for him and entertainment.

How did you transition from radio to being a community activist?

You’re able to wear so many different hats in life and a lot of people just stick with one thing. We’re multitalented. We can do so much and I always encourage people, ‘If you have something you want to do, do it.’ One of the things I wanted to do – and I still want to be – is I want to be a mortician. Weird right? It comes from helping families. It’s the lowest point for a lot of families they’re grieving and they’re going through a lot and being able to feel their pain. They’re always going to remember that. The community is about families.

Do you have different programs or tactics that separate the youth and adults that you work with?

Yeah. One of the things we do is mentoring. Or schools that have problems, they come to us and say, ‘Oh we need help mentoring.’ So sometimes I go to [the schools] and talk to the youth about what’s going on and try to work out different problems. 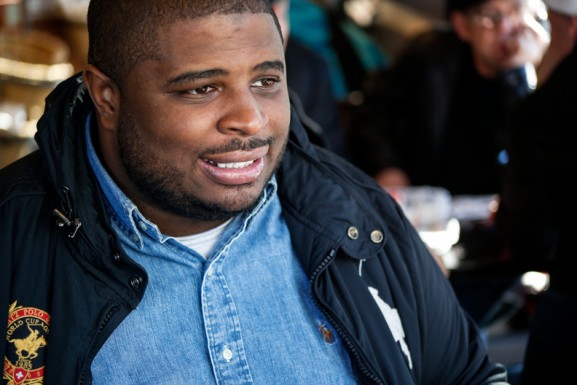 Is there an event or child that you remember that really impacted you?

What makes him so memorable?

Any future plans for Unity in the Community?

Future plans, we want to expand all around South Philadelphia and create different chapters. We have a couple initiatives we’re working on right now like for Black History Month we want to take the kids to Baltimore and you know let them see the African-American Museum and let them see outside of Philadelphia. We’re having a Women’s History Month program. [It’s] just an event to cover and inspire the young ladies in our community. I want to get more members and go to different cities. And just the fact that it’s 2015, it’s a new start, new ideas. Those types of things make me excited.

– Text and photos by Kelsey Stanger and Addy Peterson.

Cooking, cleaning and running errands are all routine tasks many people accomplish every day. But for some, those tasks can’t be done without assistance. Aid For Friends is an organization that helps those who cannot do [continue reading…]

On the corner of Mansion and Gay streets, a vacant lot served as parking space for about 30 cars each day. The lot had been looked after and cared for by the community for thirty [continue reading…]