Bike commuting in Philadelphia has grown more than 200 percent over the past 25 years. And while Philadelphia continues to lead the top 10 largest cities in bike commuters, it has fallen behind other major cities in safety and infrastructure improvement.

The Better Mobility 2015 platform, released in November by the Bicycle Coalition of Greater Philadelphia, illustrates the pros and cons of Philadelphia’s pedestrian, bike and vehicle traffic.

The coalition plans to use this platform to ensure the next mayor and City Council members understand the changes that bicyclists believe need to be made. 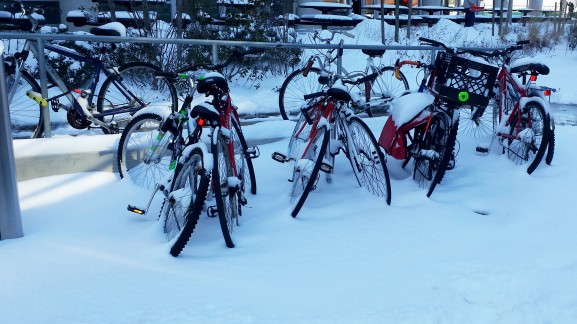 Sarah Clark Stuart, deputy director of the coalition and a commissioner of Philadelphia’s Parks and Recreation Department, has a clear vision as to what specific qualities the city’s next mayor needs to successfully execute her group’s platform.

“The Better Mobility working group is a coalition of 10 organizations seeking a mayor who will prioritize transportation policy and infrastructure in their administration,” Stuart said. “The next mayor must be willing to invest in bringing city streets into a good state of repair and a Vision Zero action plan by providing the city agencies, such as the Streets and Health departments, with the resources they need to make city streets safer.”

Vision Zero is the concept of reducing bike and pedestrian fatalities to zero.

According to a Safer Streets Report, the Pennsylvania Department of Transportation determined that traffic accidents cost the Philadelphia economy $1 billion per year. The Better Mobility platform aims to improve this by encouraging the next mayor to calm traffic, improve intersections and incentivize better compliance with traffic laws. 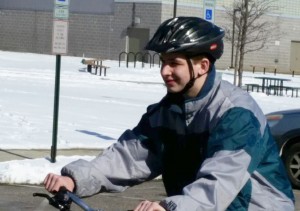 “Philadelphia currently suffers from 11,000 crashes a year that kill 100 people and injure at least 10,000 others,” Stuart said. “Reducing the negative economic impact of traffic crashes will improve the city’s economy and make the city a more attractive and safer place to live and work.”

Philadelphia has more than 400 miles of bike lanes, which is greater than any other city on the East Coast. Since 2008, the city has installed around 50 miles of new bike lanes, none of which are “protected.” Protected lanes are frequently painted green, which gives pedestrians, bikers and drivers a better understanding of where the lanes are.

The Better Mobility platform provides a Vision Zero goal that, if enacted, would help to reduce crashes that result in fatalities and critical injuries. According to Stuart, the only way to do so is by electing a mayor that is dedicated to improving infrastructure.

Joseph Coyne of South Philadelphia believes there is a need for more lanes and signs.

“The only area where I’ve ever seen any bicycle signs is around the University of Pennsylvania’s campus. But as far as Center City, there is no signage and sometimes no bike lanes,” Coyne said. “University City added a ton of wide bike lanes and it’s so much better to bike there.”

With a lack of room on streets for vehicle drivers and cyclists in some areas of the city, tension has continued to come between the two. The Better Mobility platform addresses this issue and sees stricter law enforcement as the best solution, and some Philadelphians agree.

“Something inexpensive and effective would be for the city to ensure there is strict enforcement of traffic laws for everyone regardless of the number of wheels,” bike commuter Adam Mullen said. “The city could include a program which allows cyclists, pedestrians and drivers with dash-cams the ability to submit a complaint along with identifying evidence to police for follow-up.”

Philadelphians will have a chance to hear from the mayoral candidates on March 19 at the Better Mobility group’s mayoral forum. The forum gives candidates the opportunity to address voters with their plans for traffic improvement.

“We hope that the mayoral candidates will address their understanding of the platform and articulate what they want their administration to accomplish toward fulfilling it,” Stuart said. 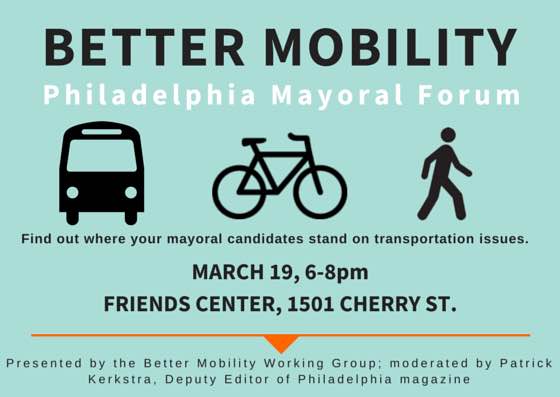 – Text and images by Allie Gentile and Jack Goodwillie.